This Busted IPO Has 50% Upside

By many measures, 2013 is shaping up to be the best year for initial public offerings (IPOs) since 2007.#-ad_banner-#

The volume of new offerings has surged, and hot new issues such as FireEye (Nasdaq: FEYE), Rally Software (Nasdaq: RALY) and Epizyme (Nasdaq: EPZM) have already bagged triple-digit gains. This week’s well-received IPO from Twitter (NYSE: TWTR) is merely icing on the cake.

Yet amid the good news, some IPOs have been duds. Companies with short track records or an open-ended path to operating losses have been tossed in the IPO dust bin.

But in the rubble, you can find some deep value plays — and building products firm Ply Gem Holdings (NYSE: PGEM) is one of them. The recent IPO has traded down but now holds considerable upside. 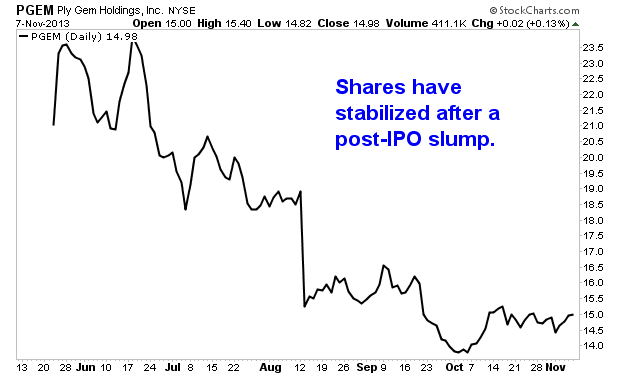 What Went Wrong?
Ply Gem makes a range of products used in home construction and the repairs and upgrades of existing homes. The company has strong market share in windows, doors, paving stone, vinyl siding, and fencing. And as you’d suspect, sales have been rising for the past few years in tandem with the housing recovery: Sales rose 8% in 2012 to $1.12 billion, and operating income rose 56% to $70 million.

But Ply Gem went public with one big problem: The company had too much debt. Even after raising roughly $350 million in the IPO, Ply Gem still carried roughly $700 million in net debt. That translates into roughly $90 million in annual interest expense.

So on its first report as a public company in late July, when Ply Gem said that operating income actually fell to $24 million in the second quarter of 2013 (compared with $30 million in the prior year’s quarter), investors were understandably spooked. Management blamed bad weather, an unexpected spike in labor costs and higher-than-expected operating costs. Just-released third-quarter results were not much better, and investors shouldn’t expect much from fourth-quarter results either.

Since this busted IPO came public, analysts have lowered their revenue forecasts by roughly 5% for the rest of 2013 and 2014 as well, citing a moderate slowdown in home construction trends. Lower sales and higher costs also mean weaker profit margins, so it’s understandable that investors ran for the hills. Lower operating profits and still-high debt levels can be a toxic combination.

Yet even with those lowered forecasts, the sharp share price sell-off appears to be an overreaction, and investors should soon start to appreciate how much value these shares now hold.

Still Positioned For Recovery
Though homebuilders have collectively noted a slowing in sales trends over the past few months, almost all agree that we are still in the early stages of a sustained housing recovery. The Housing Affordability Index, at a recent 156, remains above where it stood in the prior decade.

And there remains a great deal of pent-up demand for housing, as new household formation levels remain well below historical trend rates.

Equally important, analysts expect Ply Gem to benefit from the housing recovery (albeit in a more muted fashion that they previously assumed). Here’s a snapshot of Credit Suisse’s revised forecasts, reflecting the dismal second-quarter results and more sobering near-term outlook.

In hindsight, Ply Gem’s bankers jumped the gun. They should have waited at least a few more quarters until sales and profit trends were clearly on the mend, and they shouldn’t have brought the company with such a high debt load.

Still, the 25% to 30% drop in the stock from the IPO price means that patient investors can now own a certifiable bargain. As Ply Gem’s earnings before interest, taxes, depreciation and amortization (EBITDA) grow at a solid pace in 2014 and 2015 (thanks in large part to cost efficiencies the company is pursuing now), and as interest expense shrinks, net profits appear poised to soar.

All management has to do in coming quarters is to begin deliver the improving metrics that analysts expect as the housing market slowly firms. It may take another quarter or two after that for this stock to rebuild investor trust. But patient investors should be amply rewarded, with a move in the stock price back to the $21 IPO price level, equating to nearly 50% upside. At that price, shares would still trade for less than 10 times projected 2015 profits.

Risks to Consider: Sharply higher interest rates would blunt the housing recovery, making it hard for Ply Gem to earn the anticipated $2.20 a share by fiscal 2015.

Action to Take –> Despite a lousy debut this summer, Ply Gem is slowly gaining its sea legs. The company’s second and third quarters were unnerving in light of the company’s debt load, but balance sheet concerns should recede in coming quarters, allowing investors to again focus on the very low valuations in place.

P.S. Having trouble finding high yields in today’s market? Then you need to know about “Hidden High-Yielders.” There’s a “secret glitch” that gives investors yields of 6.1%, 7.7%, 10% or higher. Click here to check out our brand-new report on these “Hidden High-Yielders” before everyone else finds out about them.