Among the many industries dragged down the weakness of the global economy during the financial crisis and Great Recession, the entire construction sector was pulled down even more than the broader market.

However, there is stock that is often lumped in with the major construction stocks when it’s actually a retailer. Shares of this company have held up nicely despite the market weakness that crippled the construction sector.

Shares of Tractor Supply Co. (Nasdaq: TSCO) fell 30% from its peak in 2008 — but since then, shares are up nearly tenfold: 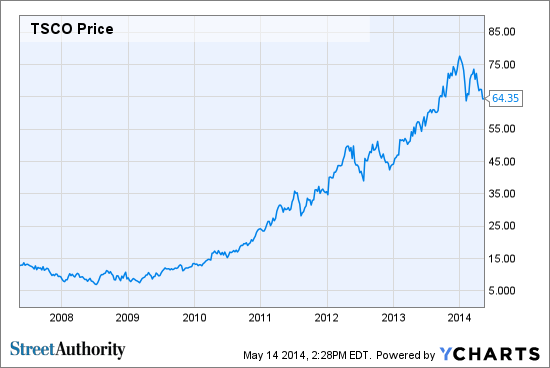 One of the nation’s leading retailers of farming and garden-related products, Tractor Supply is easily overlooked, in part, because it caters to only a handful of shoppers, unlike Wal-Mart (NYSE: WMT).

However, Tractor Supply is the go-to spot for farmers and ranchers, and that loyal following lends itself to a recurring revenue stream. The retail farming business is very resilient, and there’s nothing to suggest this will change anytime soon.

Shares are down over 15% this year. Last quarter came in weak for the company, with earnings missing consensus by 5%. Despite this, TSCO’s pullback could be a great buying opportunity.

Comparable-store sales were actually up 2.2%, but this was a decline from the 3.5% growth in the previous quarter. The biggest issues appeared to be the severe winter weather and costs from the opening of a distribution center. Despite this, the company still managed to attract shoppers. Store traffic grew for the 24th consecutive quarter.

No other retailer offers a similar product line. Sears Hometown and Outlet Stores (Nasdaq: SHOS) sells certain hardware and gardening products, but they primarily cater to everyday consumers and not farmers. There is Lowe’s (NYSE: LOW) and Home Depot (NYSE: HD), but Tractor Supply has fended off competition from these two by focusing on smaller, rural markets.

In addition to its cultlike following from farmers, there’s still room for store growth. Its margins are impressive for a retailer, with a profit margin of over 6% for the trailing 12 months. Neither Sears Hometown nor Wal-Mart can rival Tractor Supply’s margins. Tractor Supply also has negligible debt and a return on investment that’s close to 30%.

Tractor Supply has a store base of just over 1,300. It’s planning to open just over 100 stores this year, with a long-term target of 2,100 stores. The focus will be on expanding outside of its core markets in the Midwest and southern U.S. But adding more stores isn’t Tractor Supply’s only growth opportunity. The company will be opening smaller stores and converting some older stores to larger formats to better meet customers’ needs in key markets.

With its superior position in the market, Tractor Supply has historically traded at a premium. Its five-year average price-to-earnings ratio (P/E) is 24, but TSCO is trading at a forward P/E multiple of 21 based on next year’s expected earnings. The stock pays a slim 1% dividend yield, but with the company’s cash flow and low payout ratio of 22%, there’s room for growth.

Risks to Consider: Despite its resiliency during the last financial crisis, an economic slowdown will undoubtedly have an impact on the company’s sales. The biggest issue is competition, should either Home Depot or Wal-Mart gain traction with their smaller store formats, they could look to push into Tractor Supply’s markets.

Action to take –> Buy Tractor Supply as a long-term investment. Shares are 15% off their 52-week high from a few months ago, but Wall Street’s consensus price target is $76. That’s 18% upside. And of the 26 analyst ratings on the stock, none are a “sell.”

P.S. The only thing better than investing in high-quality companies like Tractor Supply is investing in high-quality companies that do an outstanding job of returning money directly to shareholders. In our latest research, we’ve found 13 market-dominating companies that have been hoarding billions in cash since the financial crisis — and they’re set to pay out $39.5 billion in dividends in 2014 alone. And that’s just the beginning. To get access to the names and ticker symbols of some of these companies, click here now.

Marshall Hargrave is the managing partner of Bridgewater Investments LLC, a boutique equity research company. Bridgewater provides specialized research for deep value securities and certain special situations. Marshall brings a unique perspective, with background as a tech startup CEO and as a financial advisor with Northwestern Mutual Financial Network. He has also helped co-found several startups in the finance space. Marshall graduated from Appalachian State University with a degree in finance and holds a Series 65 license. When he’s not reading annual reports and researching deep value stocks, he enjoys advising entrepreneurs and being active in the startup community.