It is one of the great investing secrets… But really, it’s no secret at all.

It doesn’t get much attention, partly because it doesn’t have a catchy name. But rest assured, it’s the key factor that helps the rich get richer.

If you’re not using it, to put it simply, it’s going to be extremely challenging for you to earn lasting wealth. You’ll have to worry about things like timing the market, finding the areas that are “hot,” trying to “beat the crowd”… and generally playing the market as if it were a lottery, which is typically a loser’s game.

I’m talking about compounding your dividends through reinvestment.

I know, I know… it’s not the sexiest thing to talk about. And it’s definitely not what most investors want to hear.

But rather than send you off chasing the latest fad in the market, we believe in telling our readers the truth about what it takes to be successful in the stock market over the long haul.

The Beautiful Math Of Compounding

The truth is that dividend payments generated by a modest investment might seem inconsequential at first. But through the magic of compounding, it won’t take long before they can begin to make a dramatic impact.

You see, when you buy shares of dividend-paying stocks, the dividends they pay can be used to purchase more shares, leading to increasingly larger dividend checks. These larger checks can then be used to buy even more shares and so on. In time, even a small stake in such stocks can grow into a tidy sum.

Let me show you just how powerful dividend compounding can be.

Now, rather than simply pocketing that $500, imagine if you purchased 50 more shares instead.

Of course, those 50 new shares would then generate dividend payments of their own.

So if you reinvested your dividends and left your investment alone for the second year, your 1,050 shares would generate a little more than the first year — $525 in dividends.

Fast forward through 30 years of dividend reinvestment, and your original 1,000 share stake in XYZ would have more than quadrupled to 4,322 shares.

Wait, It Gets Better…

Of course, that’s a simplistic example. You would hope your shares would gain value over time rather than just stay at $10 per share.

So to complete this example, let’s say XYZ’s stock price gains 8% per year — which is right around the historical average for the broader market. And let’s say the company raises that dividend by a modest 3% per year, on average.

Again, let’s say you take those payments and you reinvest your dividends every year. How much would you make?

As the table below shows, this steady compounding process can yield amazing results over the long haul… 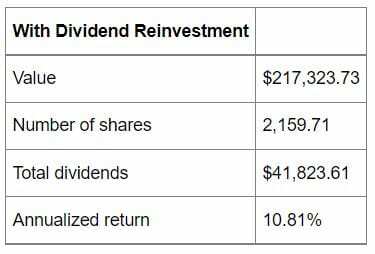 Your original $10,000 investment would have swelled to more than $200,000, without ever adding another penny.

But what would have happened if you didn’t reinvest dividends? The stock would still be worth about 10 times more than what you paid, thanks to capital gains. But without any reinvestment you would have only collected a measly $24,000 in dividends and you’d be left with the same 1,000 shares.

Granted, this is just an example. Not everyone has 30 years to compound their money like this. But on the flip side, there are plenty of stocks that hike their dividends by a lot more than 3% a year, too.

Either way, the results are clear. Successful investing for the long haul is really nothing more than a game of compounding by earning a consistent return and reinvesting your profits back in the market over and over again. There are no shortcuts.

But here’s the fun part… When your portfolio is large enough, you can stop reinvesting and live off the dividends as a second income.

Believe me, it is possible. Many of my premium readers over at High-Yield Investing are already in their retirement years and living off of their portfolio income. But I can guarantee you that in most cases, it didn’t happen without dividend reinvestment and compounding…

Compounding gives you more time to enjoy life. You don’t have to be glued to CNBC or your computer screen, looking for the next “hot” stock. And you don’t have to worry about what’s going on in China or Russia or the Middle East, either. Your portfolio remains largely unaffected.

The magic of compounding is most powerful when an investor focuses on established companies that throw off a steady stream of dividends. Simply find dependable companies that pay steadily rising dividends, reinvest your payments, and let the math take care of the rest.

Editor’s Note: If you haven’t taken measures to protect yourself from the devastating impact of inflation, then now’s your chance…

Fortunately, the Doctor is in. Our colleague, Dr. Joe Duarte, is hosting an inflation-proof income summit that just went “live” — and you don’t want to miss it…

In this one-of-a-kind event, he’ll show you, step-by-step, how to make simple moves that repeatedly bring cash in, week after week. With this simple-yet-effective technique in your arsenal, you’ll be able to simultaneously fight inflation and generate robust income.