This Overlooked Stock Offers Growth And A 5.8% Yield

As kids, we’re taught that “you can’t have your cake and eat it too.”

#-ad_banner-#There’s always a trade-off, always an opportunity cost to forgo in exchange for something else. For investors, it means that you can have growth, but not value — or value, but not growth.

I’ve found a company that offers both high growth potential along with a bargain valuation and a generous dividend. Yet where I’ve found this stock may be the biggest surprise of all.

Shipping stocks haven’t been held in high regard for some time now. A look at the Baltic Dry Index (BDI) tells you everything you need to know about investor sentiment in the sector: 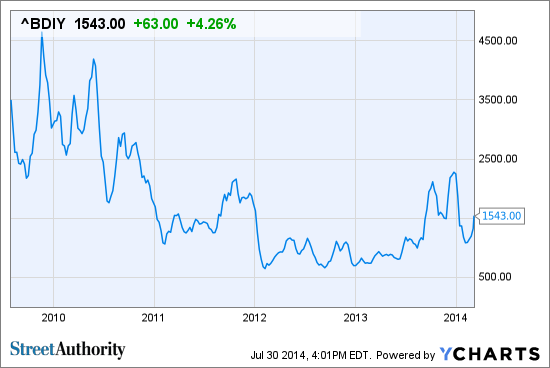 This might cause concern among investors currently looking at these stocks, but it doesn’t reflect the general attitude that shippers and charters currently have. A strong rally is widely expected as Chinese demand for steel and coal continue to climb, and iron exports from Brazil and Australia are expected to rise as well.

Analysts predict an average range around 1,500 for the BDI this year, which means there is plenty of upside. Global dry bulk seaborne trade is expected to grow 5.8% in 2014, faster than the 5.3% growth in the bulk fleet. It’s a classic case of demand outpacing supply, one that industry experts anticipate will continue into 2016.

Based in China, Seaspan Corp. (NYSE: SSW) probably isn’t a familiar name to American investors. But its management and leasing of containerships put it in the perfect position to profit from the growing shipping industry.

Unlike many of its peers in the containership industry, this is a company that has carefully managed its operations. The company had a vessel utilization rate of 99.3% during the second quarter, excluding off-charter days. In addition, Seaspan added two more ships to its fleet during the last quarter, bringing the total to 74 vessels.

SSW trades at a trailing price-to-earnings (P/E) ratio of an inexpensive 9.5. Earnings per share (EPS) are expected to rise 208% this year. Even based on a forward P/E of 17.6 times next year’s projected earnings, SSW still trades well under competitors like Nordic American Tankers (NYSE: NAT) and Navios Maritime Partners (NYSE: NMM).

Seaspan’s attractive valuations give it a P/E-to-growth (PEG) ratio of just 0.6, which indicates that earnings are growing faster than the stock price reflects — a key statistic for value hunters. Long-term EPS growth is estimated to be about 16%, among the highest for shipping stocks.

Leadership has carefully managed Seaspan’s aggressive ship purchasing plan, with 31 new building containerships scheduled for delivery by the end of 2016. Its operating margins are high as well at 46% compared with the industry average of 30%.

One of Seaspan’s biggest selling points is its 5.8% dividend yield, representing a payout ratio of 48% of earnings. The company has raised its dividend 38% since February 2013, from $0.25 to $0.345. Barclays upgraded its recommendation from equal weight to buy in May, sending a clear signal to investors that the stock is primed for future growth.

Despite the slump in the Baltic Dry Index over the past five years, Seaspan’s performance has been strong. With the BDI near five-year lows, any positive momentum could propel SSW upward. 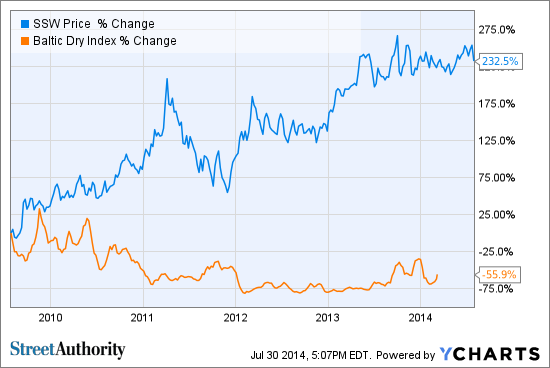 Risks to Consider: The cost to maintain sea vessels requires a high utilization rate that could weigh on earnings if ships sit for repairs or maintenance. Investors should keep an eye on Seaspan’s debt-to-equity ratio as more ships are added to the fleet.

Action to Take –> If Seaspan’s P/E rises to the industry average of 20, this stock could trade at $28, representing 24% upside from current levels.

While a 5.8% yield with this kind of upside is compelling, readers of Michael Vodicka’s High-Yield International newsletter have been earning 8%-plus yields from SSW since 2011. How are they doing it? Thanks to a little-known way to safely pocket higher dividends in exchange for sacrificing the potential upside in the stock. Mike’s readers aren’t complaining though, since they’re pocketing a yield more than quadruple the average S&P 500 stock. To learn more about the kinds of high-yield opportunities you can cash in on from international companies, go here.

Daniel Cross has been in the industry as an investment writer and financial advisor since 2005. His experience includes serving as editor-in-chief of a corporate newsletter aimed at employee education regarding investing and retirement planning, crafting thought-provoking white papers for financial service firms, and myriad pieces of work that can be seen on Investopedia, Seeking Alpha, Morningstar, and more. He holds the Chartered Financial Consultant designation (ChFC) as well as Series 7 and Series 66 licenses, and has embarked on the arduous journey of obtaining the coveted CFA designation.