Forget The New iPhone — Profit From ‘iCash’ Instead

These events are always surrounded with speculation on what Apple will reveal. Will it be an iWatch, new iOS, a newer, bigger, faster iPhone? All eyes are focused what the company’s next hit product could be.

This time around, Apple unveiled the iPhone 6, which will have a bevy of new and improved features, such as a larger iPhone, a sapphire crystal screen and a faster more efficient A8 chip.

I can’t tell with absolute certainty what will happen to Apple’s share price in light of the new iPhone. But in the days following the announcement, I can guarantee there will be constant chatter from every corner of the Earth analyzing the implications of Apple’s latest product launch.

While all analysts will have their opinions, there’s something in particular that we will be watching for as CEO Tim Cook reveals Apple’s latest product offering…

I’m talking about a new technology that could be featured in the new iPhone that has only recently started to surface. A technology that our own expert, Andy Obermueller of Game-Changing Stocks, predicted would come out for future smartphones, even years ago…

If you’re familiar with Andy and his work, you may have read about his prediction that Apple will unveil a new form of currency called “iCash.” (To read more about iCash and Andy’s other predictions, check out this report.)

Simply put, Andy’s iCash prediction is about the next wave of how we pay for things.

In the not too distant future, you will no longer need to carry cash, debit or credit cards in your wallet… those will eventually be obsolete.

Everything will be done via your smartphone.

Recent reports suggest that Apple will be adopting this technology in its highly anticipated iPhone 6. And if this is true, it could be a real game-changer.

Think of how Apple revolutionized the music industry. It could do the same thing with how we make payments. Apple has sold well over 500 million iPhones, making it the dominant player in the smartphone space. And when you combine that with its roughly 800 million global iTunes accounts, it already has a leg up on the competition. One click and you can already purchase an app, song or video from its store… now with one swipe of your phone you could purchase your groceries, clothing or gas.

Andy has been pounding the table about this idea for over two years.

And now, according to the Financial Times, it’s becoming a reality. Apple is in talks with Netherlands-based chip maker NXP Semiconductors (Nasdaq: NXPI) to use its near-field communications chip technology in the next iPhone. (We talked about NXPI in a previous issue of StreetAuthority Daily.)

Andy has been recommending NXP since 2012. And as you can see from the chart below, readers who followed his recommendation are already up big… 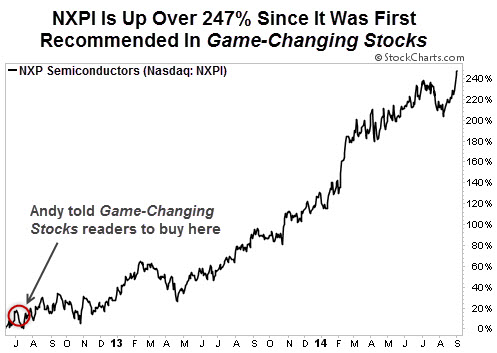 Although NXP is up 247% since Andy’s original recommendation, he thinks the company stands to reap massive profits from Apple’s adoption of this technology — which should lead to further share price gains.

Apple has already taken steps to address security concerns regarding mobile payments, with new features such as Touch ID, a fingerprint recognition reader. Add in the NFC chip technology, and mobile payments will be as safe and simple as buying your favorite app or song.

So while everyone is focused on what the new iPhone will look like, we’ll be watching how the next generation of payment technology unfolds. And more specifically, we’ll keep a close eye on NXP in the coming months.

There are many implications surrounding Apple’s announcement yesterday. Our analyst Andy Obermueller, the man who accurately predicted Apple’s rise in 2010 and decline in 2012, made his boldest Apple prediction years ago. It looks to be coming to fruition. But he continues looking past the obvious companies to ones that could provide even more impressive gains. To see how you can profit from game-changing ideas like “iCash”… “Google Internet”… a new biofuel that’s currently in production and others chronicled in his most recent report, “The Hottest Investment Opportunities For 2015,” click here.