I have a simple question for you…

If you could buy 5% of a company and have it turn into 10% of the business — without investing another dime — would you do it?

It’s obviously a rhetorical question. Who wouldn’t want their stake in a company to double in size?

Well, it so happens that you can do this. And you don’t have to reinvest dividends or pay taxes on any capital gains.

Certain companies will periodically “give away” a portion of company ownership, free of charge, to their existing shareholders. They’ll even spend billions of dollars of their own money to do it.

Coca-Cola (NYSE: KO) has been known to do this. The company is on track to “give away” $2.5 billion worth of ownership by the end of 2012, but recently said it would begin “giving away” $18.9 billion more as early as next year.

Starbucks (Nasdaq: SBUX) also likes to have these “giveaways.” During the past 11 years, the company has “given away” $5.1 billion worth of ownership.

But it’s not just these two. Every year, companies the world over are “giving away” billions of dollars worth of company ownership. Investors get it tax free and often watch the share price rise afterwards.

When a company buys back shares of its own stock, it makes every share you own worth a larger percentage of the company.

Your ownership has doubled, but you don’t have to pay taxes on the increase. And as long as the company’s value remains unchanged, each share of stock is twice as valuable.

Companies with strong buyback programs have consistently beaten the S&P 500 over the years, especially recently. This is clear when you look at the PowerShares Buyback Achievers Fund (NYSE: PKW). This fund has tracked the top buyback companies since December 2006.

To become included, a company must have repurchased at least 5% of its outstanding shares in the past year. Top holdings include IBM (NYSE: IBM), Home Depot (NYSE: HD) and Disney (NYSE: DIS) to name a few. As the chart below shows, the buyback fund has handily beaten the S&P. 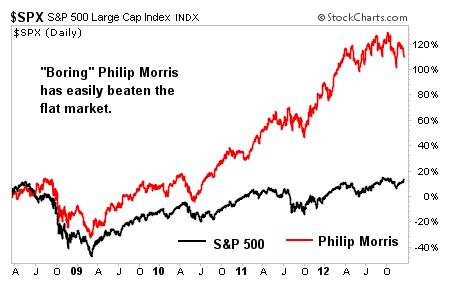 The same goes for many individual companies. Take IBM (NYSE: IBM), for example.

Since 2009, IBM has repurchased more than $40 billion worth of its own stock. In that time, the company has more than doubled the S&P.

The boost these buybacks can give a stock is one reason I like investing in companies with strong buyback programs.

But there’s one other thing you should know about companies that buy back shares. It’s an investing secret that might sound odd, but it could help you make long-term wealth in the market. It’s a trick Warren Buffett has used for years.

In his 2011 annual report, Buffett praised IBM for its financial management. That makes sense. After all, even with its huge $217 billion market cap, IBM’s stock has more than doubled the market over the last few years.

But Buffett also said something surprising. He talked about how he hoped IBM’s stock would “languish” for a few years. Why on Earth would he want that?

And Buffett knows the more shares bought by IBM, the greater his stake in the business becomes. Most important, this principle works for all investors. Any shares you own would be more valuable too.

Risks to Consider: Keep in mind that share buybacks don’t necessarily guarantee that the share price will rise. Although they can give investors a larger piece of the pie, if the pie is shrinking, then the total value of your investment could decline.

Action to Take –> But as a general rule, if you invest in companies with strong buyback programs, then your shares are likely to increase over time as your stake in the business grows — even if the company’s actual business doesn’t grow a cent.

[Note: I just released my Top 10 Stocks for 2013. It includes several companies with enormous buyback programs. For example, one company on my list bought back $14 billion in stock in 2011 alone… and has $6 billion more set aside for additional buybacks. Amazingly, it’s trading for a bargain price right now, while also paying its largest dividend yield in history. To learn more about this company and all of my Top 10 Stocks for 2013, click here.]