A couple weeks ago in StreetAuthority Daily, we talked about some of Corporate America’s latest financial engineering involving a frenzy of share buybacks.

#-ad_banner-#​The basic story: many companies are taking advantage of historically low interest rates to borrow money and then in turn use it to buy back shares of their own stock.

But that’s not the only financial engineering that’s been going on lately… In fact, this other trick that Corporate America is employing has been a hot-debate on Capitol Hill.

You may have heard it in the headlines recently. It’s called “corporate inversion” or “tax inversion.” But what you haven’t heard is how it’s led to triple-digit gains for investors in the past.

Our resident expert in international investing and Chief Investment Strategist of High-Yield International, Mike Vodicka, recently gave a great explanation of what an inversion is:

Corporate taxes are gaining renewed attention because of a (formerly) little-known tax strategy called a tax inversion. Tax inversion occurs when a company headquartered in the United States purchases an international competitor in a country with a lower corporate tax rate. It then relocates its corporate headquarters to that country in order to lower its tax rates.

While it’s true that the U.S. tax system has a lot of so-called “loopholes” and many corporations wind up paying less than 35%, it’s also undeniable that the top line rate (and the complicated system in general) can and does wind up being a headache for many companies at best — and a put a serious crimp in profits at worst.

Whatever your feelings are on this trend, it seems that more and more companies are pursuing a tax inversion strategy. Vodicka addressed the argument and its benefits recently in one of his premium newsletters:

Tax inversions are controversial. But from a fiscal and operational perspective, the financial benefits are clear. And recent portfolio holdings have demonstrated that companies executing tax inversions have seen their share prices beat the market as investors anticipate higher profitability.

To Vodicka’s point, companies that have announced a tax inversion have historically crushed the market.

Take one of his picks, Eaton Corporation (NYSE: ETN) — a power management company that makes electrical, hydraulic and mechanical components — which bought Cooper Industries Plc and relocated its headquarters to Cooper’s Ireland instead of staying in the U.S.

This move would save $160 million in taxes a year by 2016. When Eaton announced its plan to move in May of 2012, it soared more than 80% over the next two years, before recently pulling back.

This isn’t an isolated incident, either. Take a look at this chart of companies that have announced tax inversions in recent years, and how they’ve fared afterwards:

This trend has been about 10 years in the making… over 47 corporations have moved overseas in the last decade, compared to 29 corporations that did in the 20 years prior.

Investing in companies that are looking to move their headquarters overseas could be a novel investing strategy. But we’d caution against using it as the sole reason for buying a stock.

Just look at what happened to Walgreens (NYSE: WAG), for example. The largest drug retailer in the U.S. had plans to buy the remaining 55% of Swiss company Alliance Boots GmbH (it bought a 45% stake in Alliance Boots back in 2012,) allowing it to complete a tax inversion. But the company came under heavy political pressure for potentially taking advantage of what President Obama himself called the “unpatriotic tax loophole.”

Walgreens weighed its options, and on August 5, decided that a potential legal battle with the IRS and the consumer and political backlash it might incur wasn’t worth the risk. Shares plummeted over 14% in one day. 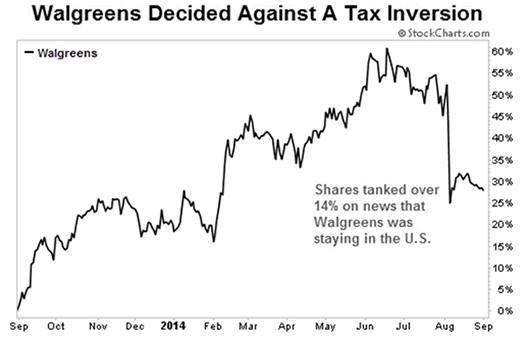 This goes to show the weight that Wall Street is putting on tax inversions. If a company pulls it off, shares could spike. But if it doesn’t, watch out.

Rather than spending your time predicting which companies might or might not relocate, we think you’re better off owning shares of certain high-quality international companies instead.

Not only are corporate taxes much lower in places like Ireland, Singapore, United Kingdom and South Korea, but there is a much stronger dividend culture abroad. In fact, Mike’s latest research found nearly 750 international companies that pay 6%-plus yields. You’ll only find about 6 companies trading on the S&P 500 that have comparable yields.

These are the kinds of stocks Mike is finding every month in his premium newsletter, High-Yield International. To get access to some of these high-yield stocks — and nearly 100 international companies paying 12%-plus yields — go here.