A Bullish Sign For Uranium Could Send This Stock Soaring

On March 11, 2011, a massive 9.0-magnitude earthquake erupted about 45 miles east of the Japanese coast. The earthquake let loose a huge tsunami that struck the Fukushima Daiichi nuclear power plant and caused a reactor meltdown.

This was the worst nuclear disaster since the 1986 Chernobyl incident and caused bitter backlash against the nuclear power industry around the world.

Japan immediately shut down its remaining nuclear plants and Germany followed suit. Both countries vowed to be nuclear free by 2030 and 2022, respectively.

Was this the end to atomic energy?

As you can see from the chart below, major uranium producer Cameco (NYSE: CCJ) plummeted on the news: 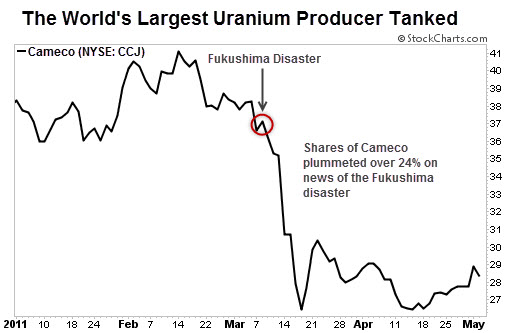 But here’s where the story gets interesting…

The Fukushima nuclear incident in Japan — an event that singlehandedly sparked a 50% plunge in uranium prices and raised speculation about the “end of atomic energy” — has actually had no impact whatsoever on global uranium demand.

You see, most of Japan’s nuclear fuel is purchased under long-term supply agreements. Uranium fuel is thus delivered regularly to utilities there.

Here’s what Dave Forest, Chief Investment Strategist for Junior Resource Advisor, told his readers about uranium back in December:

This begs the question… if Japan said it was getting out of the nuclear power business, then why does it seem like they’re going back on their earlier proclamation?

It’s because, simply put, Japan has no choice but to reverse its position. Nuclear is the only option. Historically nuclear plants supplied about 30% of Japan’s power… and the cost was at a fraction of what oil or gas fired plants run.

Since the shutdown of all Japan’s nuclear power plants, they have seen a record trade deficit of 24 straight months. In its most recent month, July, the trade deficit was 964 billion yen ($9.4 billion). The reason behind their large trade deficits come from the increased oil imports, which has been needed to keep the lights on without nuclear.

But that’s beginning to change…

About six weeks ago, three of Japan’s 48 nuclear power plants cleared new safety hurdles set in place after the Fukushima disaster. And the approval process has been set in place to restart 19 more.

#-ad_banner-#Japan’s need for uranium coupled with critical news from one of the most important uranium mining centers on Earth could be a big positive for both sentiment and physical demand in the uranium market.

Cameco said it was halting production at its McArthur River mine and Key Lake mill operations in Canada in response to receiving a strike notice… nearly 535 unionized employees could lose their job.

The McArthur River mine has the capacity to produce about 18 million pounds of uranium yearly — or about 15% or global production.

Here’s what Dave told his readers about the recent mine shutdown in his most recent Junior Resource Advisor newsletter issue:

Dave’s favorite way to play the uranium sector is through Uranium Participation Corp (OTC: URPTF). With a target price of $8, he sees a potential 64.6% upside in the stock. As URPTF is a small ($570 million market cap) over-the-counter stock, such stocks often come with a bit more volatility. Investors looking to buy shares should do so with risk-management principles in mind — utilizing a stop loss in accordance with your risk tolerance.

P.S. — Uranium isn’t the only commodity on the move. Back in July, our resident resource expert Dave Forest told readers where to find the next big commodities boom. He’s found a small Canadian outpost that’s poised to be home of the next gusher in multiple commodities plays. His latest research on this $1 trillion Canadian boomtown will also show you some major plays in the uranium sector. To get all the details, I invite you to visit this link.