This Soon To Be Public Company Could Change Banking Forever

It could be one of the greatest innovations to come out of the financial crisis, and it’s gaining ground in almost every aspect of our lives — from transportation and hospitality to financial transactions.

I’m talking about the “sharing economy.”

#-ad_banner-#Companies like Airbnb, Uber, Lyft and Kickstarter are the major household names in this burgeoning space, but there’s one peer-to-peer company that could disrupt the very way we borrow money.

In fact, my colleague Andy Obermueller of Game-Changing Stocks calls it “The Next Big Thing in Finance.”

But before I get to it, I want to share a little history about the company, because it’s something everyone can relate to.

The fight against credit cards

It all started in 2006 when an infuriated Renaud Laplanche opened his credit card statement and noticed his 16.99% interest rate was astronomical in comparison to the measly 0.48% interest rate he earned from his savings account at the same bank.

How could there be such an extreme difference between the two rates? Was the current banking system really the most efficient way for those seeking affordable credit and a decent return on their hard-earned cash?

After seven years and billions of dollars of credit extended, Laplanche has demonstrated that an online marketplace connecting borrowers and investors is far superior to traditional banks.

Looking for a loan?

Andy explains how easy the process is and why it’s so beneficial for both the borrower and the investor in his most recent issue of Game-Changing Stocks:

Lending Club makes the process as transparent as possible. 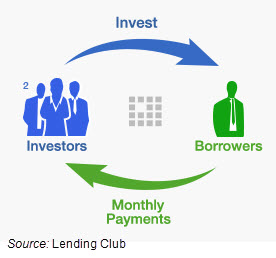 As the investor, you are the one fulfilling loans and earning income on your capital. You can even get started with an investment as little as $25.

It’s simple: open an account, peruse the different borrowers and choose which loans, called Notes, you would like to invest in.

By investing in multiple Notes, you can diversify your portfolio and reduce your default risk — the risk that a borrower won’t pay the loan back. Then you simply sit back and collect monthly paychecks.

Lending Club uses a simple letter-grade system to identify the risk-reward ratio associated with each loan.

As the borrower pays back their loan, you get monthly payments of principal and interest. The historical net return from grade A-to-C grade Notes ranges between 5% and 8.6%, according to their website.

These aren’t sub-prime borrowers either. The average borrower has a FICO score of 700, 16.7% debt-to-income ratio (excluding mortgages), 15.7 years of credit history and personal income of over $72,000.

Here’s another great thing: there is no market risk. These investments don’t fluctuate with the stock market, they don’t rely on what the Federal Reserve does and they are a great alternative for those who don’t want to invest in bonds.

Though Lending Club is planning to go public sometime in 2015, no hard date has been set — giving potential investors plenty of time to evaluate the company.

You can view the audited financials here to get a better idea of its financial growth over the last few years. While the value of the deal is up for debate, Lending Club’s past performance indicates this could be a hot new issuance in 2015. Large investors will certainly keep a close eye on this company leading up to the IPO.

We’ve seen a slew of hyped up, high-tech IPO’s in 2014 so far. But in my opinion this one is a fundamental game changer that has a bright future ahead.

In Andy’s premium newsletter, Game-Changing Stocks, he dives deeper into the company, explaining exactly why investors should take a look at Lending Club. Andy is notorious for spotting game-changing stocks way before the crowd. In fact, over the last four years he’s spotted 21 triple-digit winners. You can gain access to all of Andy’s research, including the name and ticker symbols of his latest picks for 2015 that could soar over 100%. Simply follow this link.