It’s incredible how quickly things can change in the energy sector.

#-ad_banner-#​Just 10 years ago fracking was still uncommon in North America. It took billions of dollars and millions of man hours to perfect the technology and make it economical and scalable.

Today, the development of fracking — in tandem with the ability to drill horizontally underground — has enabled the United States to tap into vast oil and gas reserves that were previously inaccessible.

In 2010 oil production in the United States had been in a steady decline for close to three decades. But a mere four years later, in the spring of 2014, America officially became the #1 oil producer in the world.

Take a look at the incredible reversal in U.S. oil production in just the last four years. 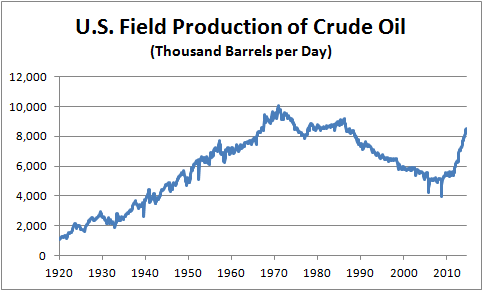 That sharp reversal in America’s oil production did not go unnoticed by the global energy community.

According to global energy services leader Baker Hughes, the number of fracking rigs used onshore in Europe and the Asia-Pacific region increased 10% in 2013. And according to energy consultants Wood Mackenzie, a record 400 shale wells may be drilled outside the United States in 2014.

That’s when it hit me. Fracking is in the early stages of going global, and now it is beginning to spread to other regions that are looking to create a little energy revolution of their own.

The North Sea is positioned between Belgium, France, Great Britain, Germany, the Netherlands, and Scandinavia. It’s been a fertile domestic energy resource for the surrounding countries — with 42 billion barrels of oil produced since the first licenses were issued in 1967.

Despite its vast energy resources, oil production from the region has steadily declined since its 1999 peak.

But this is where the fracking opportunity can come into play. With the use of modern fracking technology, the North Sea could regain its status as one of the world’s great oil fields in the next two years.

According to energy research firm N56, tapping into previously inaccessible oil reserves in the North Sea through advanced fracking technology could almost double its recoverable reserves to 45 billion barrels from the current 25 billion.

That would also make the North Sea the #1 offshore oil field in the world.

This projection has been met with skepticism on the Street. But keep in mind, only four years ago the thought of America rising to the #1 oil producer in the world was preposterous too.

Despite its potential, the ability to invest in a North Sea pure-play is difficult. Well-known operators including Talisman (NYSE: TLM), ConocoPhillips (NYSE: COP), BP (NYSE: BP) and Marathon Oil (NYSE: MRO) all operate a smattering of oil and gas fields in the area.

But the North Sea only accounts for a small portion of production for these energy giants. And frankly, even if North Sea production explodes within the next couple of years, the impact to the bottom line for these companies will be minimal.

That said, I have found one company with heavy drilling concentration in this region. In fact, 70% of its overall production came from the North Sea in 2013.

This heavy exposure means this company has tremendous upside potential from fracking in this region.

And here’s the kicker: Even without fracking, the company is still in a position to grow daily production. The company has a 40% stake in the biggest conventional oil development in the history of the North Sea. It’s investing $20 billion in conventional North Sea oil drilling over the next five years in an oil field projected to hold up to 3 billion barrels of oil.

I’m so excited about this company that I decided to recommend it to my High-Yield International readers in this month’s issue. The company sports an industry-leading dividend yield of 5.1% and has grown its dividend by an average of 8.6% a year for the past decade. And to top it off the stock trades at a 36% discount to the industry average.

Bottom line, between the fracking opportunity in the North Sea, the company’s huge conventional oil drilling stake in the region and the substantial dividend yield, this stock has everything I look for in a high-quality investment.

Since I just recommended this pick to my premium readers, I can’t reveal its name to you in today’s issue. But make no mistake — the development of fracking in the North Sea is an tremendous opportunity not only for this company, but for the entire global energy landscape.

I’ll be sure to update readers on this exciting development in future issues. In the meantime, to learn how to get access to this stock as well as other lucrative international high-yield opportunities, follow this link.