The Corporate ‘Trick’ Helping Investors Beat The Market 4-To-1

Corporate America has been deploying some interesting financial “tricks” lately as they look to pad their bottom line in this sluggish economy.

Last month in StreetAuthority Daily, we talked about how large U.S. companies were using leveraged buybacks to boost their stock valuations by borrowing at ultra-low interest rates to buy up millions of their own shares.

More recently, we talked about how corporations have used “tax inversions” to lower their tax liability and boost profits by moving to countries with significantly lower corporate tax rates, like Ireland or Canada.

#-ad_banner-#Most importantly, we told you how both of these financial engineering tactics have led investors to gains of 70% in 15 months, or even gains of 391% in less than 5 years.

There’s another corporate trick that’s been popping up more recently that could very well lead investors to similar gains.

A few weeks ago, online retailer Ebay (Nasdaq: EBAY) announced it would spin off its financial payments arm, Paypal. PC manufacturer Hewlett-Packard (NYSE: HPQ) is one of the latest companies to announce it will split itself in two.

And these are far from the only ones. The research firm Spin-Off Advisors expect there will be 62 spinoffs completed by the end of 2014 — the most since 2000 (when there were 66).

This spinoff frenzy is likely to continue into next year. Say what you will about the “gimmickry,” but if history is any guide, this could be a profitable opportunity for investors.

There are some smart reasons why companies are splintering themselves as of late. As this article pointed out recently, the profit cycle of companies is maturing and “pricing power is muted, leaving growth-starved big companies looking to liberate faster-growing units or cast off sluggish ones as a way to wring more value from the sum of their parts.”

Our resident income and growth expert, Nathan Slaughter, touted the monumental gains that investors have seen in the past by investing in spinoffs in an issue of his premium newsletter, Total Yield.

“Some of the most brilliant investors on Wall Street have been cashing in on spinoffs for decades. You may have heard of renowned money manager Joel Greenblatt. Over an illustrious career spanning more than twenty years, the Gotham Capital hedge fund manager racked up annualized returns of 40%, eclipsing even his mentor Warren Buffett.”

This is not just an isolated example. Nathan points out that several studies have shown that spinoffs significantly outperform the market, sometimes by as much as 4-to-1:

“This phenomenon has been tested numerous times over the years with compelling results. One of the most famous studies was conducted by consulting firm McKinsey in 1999. McKinsey reviewed 168 restructurings over a 10-year period and found that shares of spinoffs produced annualized gains of 27% in the 24 months following separation, versus a 17% gain for the S&P 500…

Skeptics might say that the results are skewed by a handful of big winners. But the facts say otherwise.

A Lehman Brothers study between 2003 and 2006 found that two-thirds of all spin-offs went on to outperform the market. And since 2003, Bloomberg’s Spin-Off Index has beaten the market 4-to-1. Check out the chart below.” 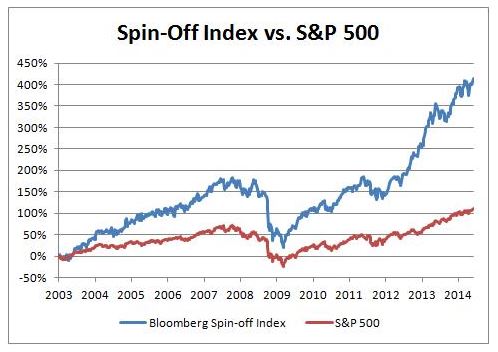 History has clearly shown that spinoffs can be powerful gainers. So how can investors harness the potential gains of spinoffs as this trend continues?

One way, Nathan says, is to invest in mutual funds devoted to finding the latest spinoff companies.

One he particularly likes is the First Investors Special Situations Fund (FISSX), which has enjoyed annualized returns of 8.9% over the past decade, compared to the S&P 500’s 7.7% annualized gain over the same period.

But perhaps an even bigger opportunity for gains is through a top oil producer that Nathan has been following since June.

This independent oil producer has been planning a spinoff for months now, and it could happen before the end of this year. On top of that, the company plans to buy back 100 million shares in the near future, or 12% of its 785 million outstanding shares, which could significantly boost its share price from today’s levels.

The opportunity is so good, Nathan recommends this spinoff target as one of his top three “buy first” stocks in Total Yield. If you’d like to get access to Nathan’s pick as well as learn more about Nathan’s Total Yield investing strategy, visit this link.

More often than not, spinoffs work well for investors. It may be worth keeping an eye on promising spinoff companies that come forth over the next months, and buy them early before the gains start rolling in.

Christian Hudspeth is a staffed financial writer and investment analyst for StreetAuthority. He is also a lead editor for top StreetAuthority publications, StreetAuthority Daily and Dividend Opportunities. His work has been featured on MSN Money, Business Insider, Yahoo! Finance, Nasdaq.com and several other well-known online publications. Christian has several years of long-term investing experience with a keen eye toward finding deep discounts in equities and a preference toward dividend-paying stocks. Christian holds a B.B.A. in Finance from St. Edward's University in Austin and has had a passion for watching money grow since he opened his first savings account at age 8. Before he joined StreetAuthority as a writer, Christian worked in Austin's commercial banking industry for 7 years.