I recently returned from a three-week stint in Asia. After a long trip I always take time to go through my e-mail and catch up on news and reports coming in from across the commodities world.

One small but revealing item caught my eye.

#-ad_banner-#No, I’m not talking about the collapse in oil prices. In fact, as I’ll explain in a moment, the way my Scarcity & Real Wealth readers and I will profit from this has nothing to do with oil prices at all.


What caught my eye was a note about an oil pipeline being built to service burgeoning production from the Permian Basin play of West Texas.

What was so interesting about the pipeline was the excessive demand to move oil through it. Simply put, the Permian Basin today has too much oil… and it needs to be transported from the remote locales of West Texas into consuming markets in places like the Gulf Coast.

I’ve been on the phone with drillers working in this play. And they confirmed what I’ve heard from sources through the industry — the Permian is turning out to be the gift that keeps on giving.

The fertile geology has led to a boom in oil output as drilling has picked up in the past few years. Production there today totals 1.7 million barrels per day — up 100% from 850,000 barrels per day in 2007.

To put that number in perspective, at today’s production levels, the Permian is pumping out nearly 2% of the world’s total oil output by itself.

But all of the drilling success is creating a problem: How does one get the oil to the high-demand regions?

Of course, the go-to choice for moving crude like this is via pipelines. But existing pipelines are only able to transport about 1.27 million barrels of oil per day — about 75% of overall production capacity.

That leaves a lot of oil looking for a place to flow. Which brings me to the strange development I was talking about…

Midstream companies are attempting to solve the transport problems by building more pipelines. One of the biggest projects is the so-called Basin Pipeline being developed by Plains All American (NYSE: PAA) and Enterprise Products Partners (NYSE: EPD).

The Basin Pipeline is slated to start up in 2015. But here’s the problem — the pipeline’s developers have too much demand for space on their new line. In fact they’ve gotten bids for 300% more demand than the pipeline has room for.

This problem creates a great opportunity for investors to profit from the situation.

The thing is that similar stories are unfolding all around the country. Oil and natural gas output from new basins is literally remaking the landscape in terms of petroleum flows and infrastructure.

I believe this is going to create huge opportunities for investors in a number of spaces. Here’s a short list of some of the top places I’m looking to profit from the flood of supply that’s resulted from America’s drilling revolution.

Midstream operators. Like Plains All American and Enterprise Products, many midstream companies are capitalizing on the oversupply of oil & gas by constructing new pipelines to bring supply to key markets. This not only means increased revenue from pipeline tariffs, but also potentially rising profits from associated services like processing natural gas and separation of by-products like propane and butane.

Exporting firms. My Scarcity & Real Wealth readers have already profited from the emerging market for U.S. exports of petroleum products. In fact, one of our picks — Oiltanking Partners (NYSE: OILT) — delivered a 72% returns since our original purchase in January. 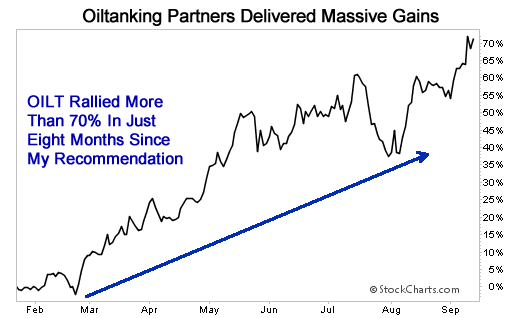 There are still ways to profit from the trend toward shipping cheap and plentiful U.S. petroleum supplies overseas — after all, this is just getting started. A number of new export facilities are now in the works on the Gulf Coast and eastern seaboard, especially for natural gas liquids such as ethane.

Storage companies. With producers and pipeline operators all striving to build new routes to Gulf Coast refining centers, a flood of supply is set to descend on this region over the coming months and years. That’s going to require massive new investments in storage tanks to hold oil before it’s run through refineries. For companies that can provide capacity, the revenue from fees on stored oil and gas are going to be substantial.

What About Oil And Gas Producers?

Well, as I’ve mentioned to my Scarcity & Real Wealth readers for the past several months, I’ve been very cautious about the E&P sector, and I still am today. Today’s high-supply environment is proving challenging for this sector with oil prices now under $60.

Lower prices and profits, combined with rising costs and corporate debt across the industry could push some producers to the brink.

I’ll of course continue to monitor this space for opportunities — but I strongly suspect we’ll find better investments in the transport, processing, export and storage sub-sectors of America’s petroleum business.

I’m analyzing a number of firms operating in the high-potential industries I mentioned above — looking to replicate the big gains we’ve seen from Oiltanking Partners. I also expect to be selective in the domestic E&P space, until we see some stabilization in local prices within plays like the Permian.

Commodities can be a love/hate experience for investors. When things are good, they’re good, but when they’re bad, they tend to turn horrible. Most investors usually just forget about commodities when they’re hated, but when you can get in at the bottom of a downturn, it can pay off big-time.

It’s these kinds of little-known opportunities that I travel the world searching for. In fact, I’ve recently stumbled upon what could be the world’s first $1 trillion boomtown. Several oil and resource-mining companies are poised to make billions from this under-the-radar hotspot. Simply put, this could be the biggest opportunity I’ve seen in my lifetime. To get access to some of the names and ticker symbols of these companies, follow this link.