There’s a little green fruit sitting on the desk in front of me.

I don’t know what it’s called. But it means a lot to me.

#-ad_banner-#I’m writing this from a hotel room in Yangon, the capital of Myanmar. I’ve been visiting the country a lot lately in search of “The Next Big Thing” in the investment world.

Many western companies, like MasterCard, Coke and Yum Brands, are jostling to get into Myanmar, which many believe is one of the last great untapped markets on Earth.

With a population of 53.7 million — making it the 24th most populous country in the world — Myanmar boasts a huge market that is just now becoming a force in the global economy.

But despite its massive size, the country only recently emerged from a period of extreme poverty. That’s why I was touched when a local I met offered me a small green fruit (that is now sitting on my desk).

It was a kind gesture from a fellow who I could tell had very little. I kept that fruit as a reminder of the man’s kindness, even after my companions told me to throw it away.

Sometimes, there is value in things that appear very basic.

The same thing appears to be happening in the markets as well. Many investors are discarding stocks where I see a lot of value.


One group in particular where I noticed this trend is energy stocks.

Now, I don’t tend to add a lot of resource companies to my Top 10 Stocks portfolio. The volatility of these stocks often doesn’t fit with my strategy of buying and owning the world’s greatest businesses.

But recently I’ve held a number of energy stocks after big changes in the sector made these some of the most valuable businesses on the planet.

Longtime readers of my Top 10 Stocks newsletter know that I’m a fan of companies that own what I call “Irreplaceable Assets.” Whether it’s a railroad, hydroelectric dam or pipeline, these are assets that simply can’t be replicated by competitors.

And one of my holdings is an energy company that operates some of the most profitable Irreplaceable Assets I’ve ever seen. Despite being overlooked by the broader market, it offers investors tremendous value.

You see, there’s been a panic among energy investors of late. Falling crude prices are spurring a sell-off across the sector. Spot prices for the benchmark West Texas Intermediate crude have plummeted to near $54 per barrel — down from nearly $110 as recently as June.

Driven by this decline, strong stocks like Enterprise Products Partners (NYSE: EPD) are taking a hit.

An Overlooked Value
With 51,000 miles of onshore and offshore pipelines, Enterprise Products Partners is one of the largest liquid natural gas shippers in the United States. 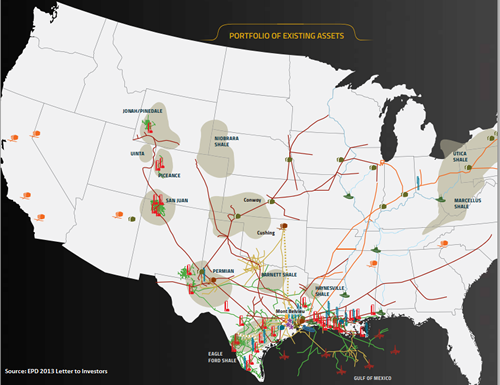 The company’s pipelines and processing plants for oil and other petroleum products constitute the kind of infrastructure that takes years and billions of dollars to build.

While it has not been insusceptible to the steep decline in the price of crude oil, investors that fundamentally link the value of EPD’s stock with the drop in share price are approaching the situation with the wrong mindset.

Here’s the key: the company doesn’t derive its revenues from selling crude. Rather, it transports the commodity on behalf of the legions of oil drillers across the United States, and those companies need to move their oil just as much at $54 per barrel as they would at $110.

That means EPD’s services are in high demand.

It’s an expensive buyout. But by acquiring OILT, Enterprise is consolidating its hold on a scarce and irreplaceable asset — 18 million barrels of crude oil storage capacity in Houston, Texas.

As of late, much of America’s newfound crude production is descending directly to the Gulf Coast — in particular, Houston.

But storage facilities in the area are becoming very scarce.

A recent report by RBN Energy concluded that by the end of 2016, Houston will have only two-thirds as much total storage capacity as other parts of the country, relative to incoming supply. The report’s authors conclude that “storage and distribution is stressed and likely to remain so for the foreseeable future.”

That means existing oil storage facilities in the Houston area are about to get a whole lot more valuable. And EPD is in the perfect position to profit from this lack of space.

But the company isn’t ending its growth effort there.

EPD is currently laying down a twin set of pipes next to its existing ones, which will more than double the oil transportation capacity to 850,000 barrels per day — up from 400,000.

To put this in perspective, the United States currently produces more than 8.5 million barrels of oil per day — that means EPD could transport about 10% of the country’s daily production.

Enterprise is maneuvering to become a premier mover of crude. That’s going to create big demand for its services that I expect will drive continued revenue growth for the foreseeable future.

Enterprise has already increased revenue nine out of the past ten years.

The best part for investors: EPD currently trades at a valuation well below the industry average.

That means that even with all its big advantages, the company is still a better value than many of its peers. Most investors just haven’t realized its true potential yet.

Irreplaceable Assets — like EPD’s vast pipeline system — are one of the three key traits I used to uncover my list of “The 10 Best Stocks to Hold For the Rest of Your Life.”

This elite group of stocks has delivered average gains of 829% over the past decade, beating the S&P 500 by more than a 7-to-1 margin. It’s no wonder I think these are companies that you can buy shares of today and hold forever.

If you’d like to learn about the other two dynamic qualities I used to find my list of “Forever Stocks” — and get the names and ticker symbols of several of my favorites — then you’ll want to check out my live presentation from St. Edward’s University in Austin, Texas. You can access a recording of my presentation for free by simply clicking here.