A few weeks ago, I told you about a simple strategy that’s never lost money.

Put simply, the longer you hold an investment, the better your chances of making a profit. The S&P 500 has never had a losing 20-year span, going all the way back to the 1950s.

#-ad_banner-#The key is finding a handful of companies that enjoy huge (and lasting) advantages over the competition, pay fat dividends to their investors each year and buy back massive amounts of their own stock.

Once you find them, the strategy is simple — just buy their shares and hold forever.

But if you want to see the best reason why investing forever is the smartest way to let the market make you wealthy, pay attention to the table below.

Earlier this year I ran a simple stock screen to find all the stocks in the United States that have returned more than 300% in the past year. To make sure we were dealing with solid companies, I only included firms with positive earnings. And to weed out the fly-by-night penny stocks, I kicked out anything with a market cap under $100 million.

You can see the results for yourself.

Talk about looking for a needle in a haystack. Your odds of finding a big winner are less than one in 2,000. What’s more, I bet you’ve never even heard of these stocks… much less own any of them.

Now here’s the interesting part. I ran the exact same screen again, but this time I changed the time period to the past five years. The results are night and day.

That’s more than 50 times as many as the past year. Here’s a quick look at a few of the more noteworthy ones…

Notice how even so-called “boring” blue-chip companies like CBS, Macy’s, and Time Warner are able to deliver exceptional gains over a longer time horizon.

The lesson: hold on for a few years, and you’re more than 50 times as likely to find big winners.

Take a well-known case — shares of Apple (Nasdaq: AAPL). Apple has been one of the market’s best performers for years. But even in the stock’s best one-year period, investors made 204%.

Now, I wouldn’t sneeze at a 204% gain, but anyone who bought Apple and held it for just one year sold themselves way short. 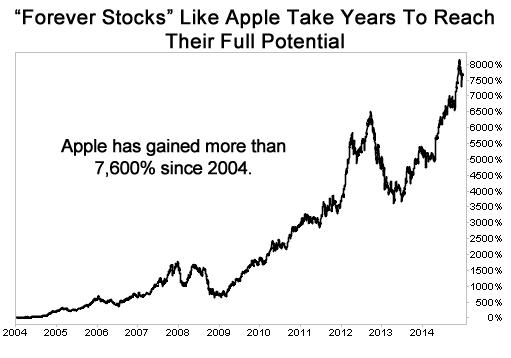 Owning a stock like Apple for a short period is like ordering a seven-course meal and only sticking around for the appetizer. Sure you get a taste, but wouldn’t you rather have the whole meal?

And yet the average holding period for a stock is now down to just seven months.

I think that’s a mistake. I’m not saying you should buy and hold every investment for decades. But what I’ve discovered — and wish I had realized sooner — is that it’s the few investments you simply buy and hold forever that make the biggest difference to your long-term wealth.

It’s one of the reasons my Top 10 Stocks staff and I started researching the best stocks we think investors can hold for the rest of their lives. We call them “Forever Stocks.”

We found that many of the stocks we identified for this elite classification were already owned by many of the world’s richest investors, politicians and businessmen — including Warren Buffett, George Soros and John Kerry.

Averaged together, the 10 Forever Stocks we’ve found in our latest research have returned an incredible 829% over the past 10 years — crushing the S&P 500 by a 7-to-1 margin. It’s also no surprise that nine out of 10 of these Forever Stocks currently pay a dividend — and sport dividend yields up to 4.6%. In my Top 10 Stocks newsletter, I rarely invest in stocks that don’t pay dividends.

I recently unveiled this Forever Stocks research for the first time to a group of investors at St. Edward’s University. To watch the filmed version of this live presentation, I invite you to visit this link.