How The Oil Market Could Crush These Homebuilders

#-ad_banner-#Texas is the nation’s largest oil-producing state. In fact, it is the world’s sixth-largest oil market, dwarfing many countries.

So when the price of oil is cut in half (or more) in a matter of months, it has an enormous impact on the state’s economy and the companies that operate within it.

Take 1985 for example. The price of West Texas Intermediate (WTI) Crude — the country’s oil benchmark — dropped more than 70% in less than six months. This was due to increased output from the Organization of the Petroleum Exporting Countries (OPEC), which produces about 40% of the world’s crude oil, and led to an eventual supply glut. 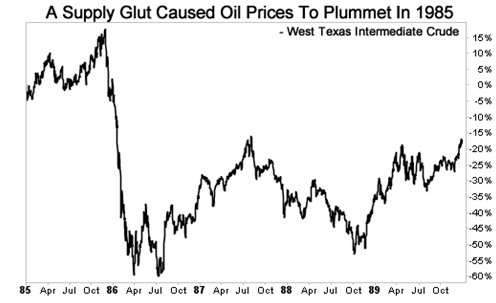 This resulted in industry-wide layoffs and the collapse of major regional banks. In Texas alone, the supply glut led to the destruction of the state’s housing market and ultimately a recession for the state’s economy that continued through the early 1990s.

Fast forward a few decades and the same situation looks to be playing out again.

Much like the events of the 1980s, the price drop has been accompanied with layoff announcements by energy giants like Halliburton Co. (NYSE: HAL) and Schlumberger Ltd. (NYSE: SAL); the closing of on-shore, off-shore and shale oil rigs; and the cancelation of new drilling projects the world over.

Low oil prices are less likely to drag Texas into a recession this time around, because its economy is much more diversified than the oil-dependent Texas of the 80s. But the economy will still suffer.

The Federal Reserve of Dallas estimates that 2015 job growth will be between 2% and 2.5%, down from the 3.6% growth in 2014. Worse yet, oil prices will weaken the state’s GDP growth as more oil rigs reduce production or shut down completely and a strong dollar will dampen exports.

That’s bad news for communities centered around the major oil fields — the Bakken shale and Eagle Ford — and major oil hub cities like Houston and Dallas. These areas are home to many high-paying oil jobs, but with the shuttering of rigs and impending layoffs, their economies will be negatively impacted.

Specifically I’m most concerned about housing.

Just look at the state’s bustling housing sector. It has benefitted tremendously in recent years from the shale oil boom. On average, in the seven large metros where oil-related jobs are at least 2% of the total, home prices rose 10.5% year-over-year — faster than the 7.7% increase for the 100 largest metros overall, according to a report by Trulia, a housing market research firm.

Texas accounted for 16% of the country’s home construction starts in 2014, according to data analyzed by MarketWatch.

But with fewer high-paying jobs and decreased job growth, there likely will be less demand for new house construction — not to mention demand for more expensive homes that oilmen with cushy jobs may have once sought when the price of oil was upward of $100.

Trulia’s research looked at the year-over-year trends in oil prices, homes and jobs since 1980. The research concluded that changes in oil-related jobs lagged oil price movement by roughly two quarters and changes to the housing market followed behind oil prices by roughly two years.

The assertions hold true for the jobs part: Prices began falling in Q3 2014 and the first layoff announcements began in early Q1 2015. The question is: will history repeat itself in the housing market? Only time will tell. But for investors, this lag is good news. It gives us time to position accordingly.

While pain in the housing market may not be fully realized right away, 30 years of data make me confident that some tough times are coming if current market conditions continue.

Since oil began to fall in June, prices of four of the biggest homebuilders have bobbed up and down, but traded mostly sideways. 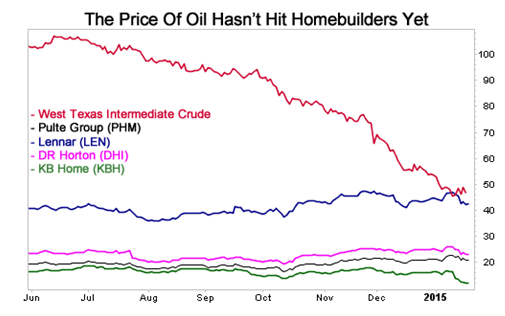 However, shares of each have dropped by an average of roughly 14% after two of the four firms reported mixed fourth quarter earnings in mid-January. 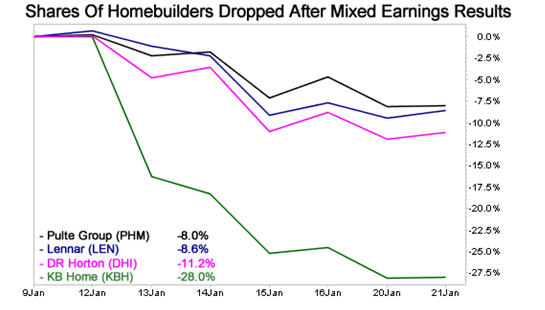 Lennar Corp. (NYSE: LEN) and KB Home (NYSE: KBH) beat fourth-quarter earnings estimates, but the big takeaway for both — and what spurred the decline in share prices — was lower year-over-year gross margins and forecasts for even lower margins in 2015. Fourth quarter gross margins were 1.2% and 0.6% lower for Lennar and KB Home, respectively, than for Q4 2013.

The firms cited various reasons for the decline in gross margins, including increased costs of material inputs and reduced pricing power.

The Texas market alone accounts for nearly a quarter of total annual revenue for both Lennar and KB Home. And both companies mentioned that they are closely watching the Texas market, in particular Houston, as it has yet to react to the oil slump.

This means that if the Texas housing market (led by Houston) crumbles, then gross margins would likely decline further, leading to decreased earnings and lower share prices.

Risks To Consider: As upside risk, if oil prices rebound quickly, then rig closures and layoffs may be halted and severe effects to the Texas housing market may be reduced or never realized. Further downside risk could come from a rising dollar hampering foreign property investment, interest rate hikes or a market correction.

Action To Take –> In the near term, big-name industry players, like DR Horton, Inc. (NYSE: DHI) and Pulte Group, Inc. (NYSE: PHM), report earnings soon. Keep an eye on their margins and what their management teams say about the Texas markets — each has considerable exposure to the state. In the medium term, watch oil price movement — low prices for a sustained period means bad news for oil firms and the housing market. In the long-term, see if Trulia’s analysis that the housing market lags oil price movement by approximately two years holds true.

Either way, housing is innately cyclical and erratic, and these headwinds make matters more complicated.. Depending on your risk tolerance and how the market forces play out in coming months, consider reducing your exposure to or even shorting the housing sector.

Want to avoid the hassle of digging into a company’s financials and decoding corporate lingo? StreetAuthority’s Stock Of The Month delivers full analysis of one premier investment to your inbox each month. To learn more about this service, click here.

​ Ian Floyd is a financial writer for StreetAuthority and an editor for StreetAuthority Daily and Dividend Opportunities. His work has been featured in Yahoo! Finance, MSN Money, The New York Times, The Austin Business Journal, The Texas Tribune and The Austin-American Statesman. Ian holds a B.A. in Journalism from the University of Texas at Austin where he was mentored by some of the industry's finest financial reporters and editors. He has several years of experience combing through financial statements and industry reports searching for undiscovered trends and untold stories.