In a recent article on StreetAuthority.com I told readers all about my new list of The Top 10 Stocks For 2015.

I decided to do more than just listing off a few names and ticker symbols. I wanted readers, like you, to be able to go out and find similar stocks on your own. That’s why I revealed the three distinct characteristics I use to track down my collection #-ad_banner-#of the market’s best performing stocks for the coming year.

Today, I’d like to highlight one of these categories a little more in depth. Because quite frankly, I’m not sure any one of my criteria is more important than this…

The ability to retain a loyal customer base and keep them buying your products for years is a hallmark of the world’s best businesses. This trait has led my Top 10 Stocks subscribers and me to some exceptional investment opportunities over the years.

Firms that can lock in a loyal group of followers are able to generate strong cash flows and superior profit margins, putting them in a better position to return money to shareholders through dividends and share buybacks.

Think about a company like Apple (Nasdaq: AAPL) for example — it’s no secret that Apple has created legions of loyal customers who exclusively use the company’s smart phones, tablets, laptops and dozens of other products and accessories.

It’s part of what’s helped the company increase revenue every year for the past decade. And I don’t even need to tell you how much that’s helped Apple investors. Just look at the stock’s performance since 2005 alone. 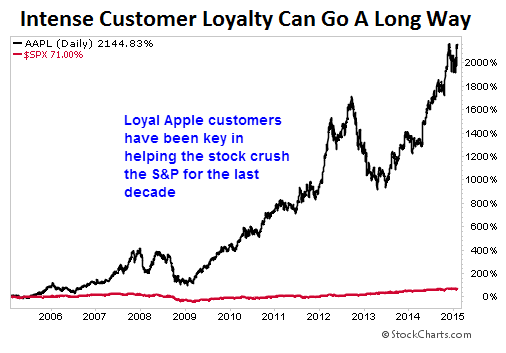 But Apple’s not the only company where a strong brand has translated into exceptional shareholder returns.

Another company I’ve loved for a long time — particularly because of its powerful brand recognition — is The Hershey Company (NYSE: HSY). The leading manufacturer of chocolate and non-chocolate confectionary carries a strong international presence with operations in more than 90 countries worldwide.

Over its history, Hershey has developed an impressive array of products boasting more than 80 brands, including Reese’s, Kit Kat, and of course their famous Hershey’s Kisses. Customers around the world gladly pass up cheaper alternatives to get their hands on the brand of chocolate they’ve known and loved for generations.

Like Apple, this brand loyalty helped Hershey amass a stranglehold on the industry, controlling nearly half the current market share in the United States, compared to just 1% for private label brands.

Its legion of loyal investors have been rewarded handsomely, with Hershey raising its net income every year since 2007 — up nearly 280% — and using that additional income to continue increasing shareholder value. Last year Hershey paid out close to $1 billion in dividends and buybacks… and the firm has stated plans to maintain its 50% dividend payout ratio over the long-term.

But while Apple and Hershey are both firms I’d love to own for the long-haul, neither made this year’s list of The Top 10 Stocks For 2015. That distinction goes to another firm with intense customer loyalty — in fact, consumers are so obsessed with this company’s products, I think it might just be America’s favorite investment.

Since it started trading on the market in the early 90s, the firm’s share price has soared an astonishing 12,000% — including a 1,000% gain since just 2008. But honestly, I think the company is just getting started.

You see, millions of its customers can’t go a single day without buying more of the company’s products. And not just in America — the company is frantically building new stores all over the world to meet growing global demand as well.

That’s why Forbes recently declared it one of “The World’s Most Valuable Brands,” and why the firm has seen its revenue skyrocket nearly 70% since 2009. 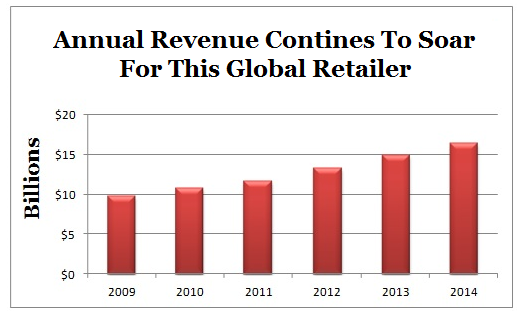 The fact is revenue growth often translates to share price growth. So while this company has seen some impressive gains over the past few years, chances are you haven’t missed the boat yet — far from it in fact. I think the company’s intense customer loyalty and aggressive growth into international markets will be a huge catalyst for its share price in 2015. The stock has already jumped 6.3% in January alone, while the S&P is down -0.84% as of February 4th.

There’s a lot to love about this company in 2015. And its hordes of loyal customers are the biggest reason I think it’s poised to crush the market even more in the coming months.

Now, I can’t give you this company’s name and ticker symbol right now. My paid subscribers would be pretty upset with me if I did. Just know that it’s companies like this that lead to the best long-term gains for investors. And if you’d like the name of this dominant global retailer — and the names and ticker symbols of my nine other top picks for the coming year — I invite you to check out my new report on The Top 10 Stocks For 2015.

You’ll be able to receive a complete list of the companies I think have the best chance to give investors outsized gains in the coming months. Many of them are already doing it now. From a company with an 80% stranglehold on a $30 billion market to a stock that may just be the single best investment for 2015, you won’t want to miss out on getting my entire list of The Top 10 Stocks For 2015. To get the complete list, simply go here.