My Case For Following Apple Into Solar

Frankly, I’m a news junkie. I’m the guy in the office that people come to for explanations on what’s going on in the Middle East, or how the latest political buzz may affect markets.

One practice I’ve become accustomed to in my daily stroll through the news is to question everything. It helps me remember the details and often leads to solid investments.

Apple has partnered with First Solar, Inc. (NYSE: FSLR) to build a solar farm that will generate 280 megawatts, or MW, of electricity — 130 MW of which will fuel all of Apple’s California operations, the other 150 MW will be sold back to a utility company. To give you context, 280 MW is enough electricity to power more than 70,000 homes, according to the Solar Energy Industries Association.

My first line of questioning is why solar and why now?

Apple had stated its goal for a number of years: to power all of its facilities using renewable energy. So, this new project is a natural progression toward that mission.

But the answer to “why now” lies in something much more timely, which has already been a boon for and could be a strong near-term catalyst for the solar industry.

You see, this industry is still in its infancy. But it’s growing up — and fast.

It was born by and relies on tax incentives, like the solar investment tax credit — a 30% tax rebate for residential and commercial solar panels.

Up until now, solar power has been too expensive to compete with other forms of energy in most cases. Though if you add in the tax incentives, many solar projects now become an economical source of electricity.

Since the first tax credits were implemented in 2006, solar installations have increased more than 6,000%, a compound average annual growth rate of 77%, according to the SEIA.

So it looks like a big reason Apple is investing heavily in solar now (as opposed to a few years from now) is that in 2017 the federal tax credits for corporations will decrease to 10%, from 30% currently.

(Although President Obama has requested a permanent extension of renewable energy tax credits in the 2015 budget, it’s uncertain whether the Republican-led Congress will be on board with this idea.

So does this mean other companies will also invest in solar power before the tax credit expires?

The answer: most likely.

While Apple’s latest venture might be the largest deal of its kind, it’s not the first.

In the Fortune 500, 215 companies, or 43%, have pledged to reduce greenhouse gas emissions, improve energy efficiency, pursue renewable energy or all three, according to a 2014 report by Ceres, a non-profit that tracks sustainable business practices.

Hewlett-Packard Co. (NYSE: HPQ) aims to produce 10 MW of energy through solar power by 2017, up from the 6 MW it produces currently.

Google, Inc. (NYSE: GOOG) currently uses renewable energy to power 35% of its operations and has a goal to use renewable energy for all of its electricity needs. Currently, Google produces 1.9MW via solar power.

So the most important question: how do I profit from the growing solar power industry?

To answer this final question, I compiled data on the some of the top solar firms:

The statistics make a strong case for why Apple chose First Solar and why you should consider adding it to your portfolio. It’s clearly a best-in-class leader in the industry.

FSLR sports an 8.6% profit margin, which bests the industry average of -5.4%. Its recent contracts should help to bolster its revenue numbers. In addition to the Apple deal, First Solar recently agreed to build 5,000 MW of solar energy capacity in India by 2019, furthering its international presence. Under the same deal, rival firm SunEdison (NYSE: SUNE) will also build 15,200 MW of solar and wind energy in India.

One of the company’s most-striking features is its liquidity. First Solar has $622.5 million in cash on hand. It also holds a current ratio of 3.54, which means as of the third quarter FSLR had $3.54 in current assets for every dollar of current liabilities. In other words, the firm should have no trouble paying its debts if things get hairy.

FSLR is on an upswing, rising nearly 7% since the start of February and could see further upside ahead if fourth-quarter earnings announced on February 24 are strong, and if the company can continue its expansion of the business without hurting margins or taking on too much debt.

To further my point, take a look at this chart of First Solar, which highlights the stock’s 20-day average rate of change: 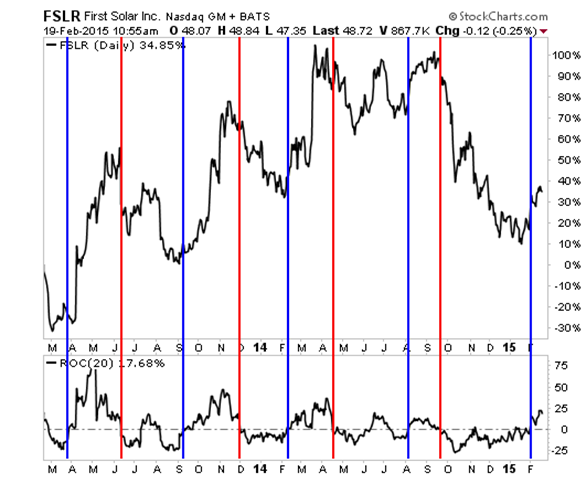 I measured the stock’s return if you had bought when the rate of change moved above zero (blue line) and had sold when it crosses below zero (red line) during the past two years. If you had followed these indicators to buy and sell FSLR, you would have averaged a 30% return over an average of 55 days.

As of February 3, the stock crossed above the zero mark, so now may be a good time to buy.

Risks To Consider: The solar market is very volatile. FSLR sports a beta of nearly three, meaning the stock is three times more volatile than the broader market. A renewed 30% federal tax incentive could also slow a short-term rush to solar but could be a long-term catalyst for the industry.

Action To Take –> Bloomberg analysts estimate that First Solar will report 66.5% year-over-year sales growth, to $1.28 billion. However, this equates to earnings per share of $0.77, down 13.6% from the previous year. So, the stock’s price action over the coming week may be determined by its guidance for upcoming quarters.

If you’re looking to make an investment in solar, you can’t do much better than by following Apple’s lead and looking at FSLR. I would buy shares at current market prices and keep an eye on the rate of change, as shown in the graph above. If it starts teetering toward that zero mark, then take profits and move on.

StreetAuthority is proud to present its newest research report “The Top 10 Stocks For 2015.” Since we first began publishing this annual research report in 2003, our picks have beaten the overall market eight out of 12 years, including years with average gains of 37%… 38%… and 39%. For comparison, the S&P 500 gained more than 30% in just one year since 2003. To learn more about this list of elite companies click here.

​ Ian Floyd is a financial writer for StreetAuthority and an editor for StreetAuthority Daily and Dividend Opportunities. His work has been featured in Yahoo! Finance, MSN Money, The New York Times, The Austin Business Journal, The Texas Tribune and The Austin-American Statesman. Ian holds a B.A. in Journalism from the University of Texas at Austin where he was mentored by some of the industry's finest financial reporters and editors. He has several years of experience combing through financial statements and industry reports searching for undiscovered trends and untold stories.