Are You A Rational Investor? Take This Simple Test…

You’ve probably heard me say this before, but studies show most investors underperform the broader stock market.

Sometimes that’s OK. After all, we each have our own unique needs and goals. And sometimes they don’t necessitate major gains. Things like capital preservation or income are important in some situations, too.

But that’s not what really gets me in trouble.

What really gets me in trouble is when I say that most individual investors are bad at investing.

I don’t say this to be a curmudgeon. I say it because it’s what you need to hear. (And don’t think I’m leaving myself out of this, by any means.) I hate to break it to you, but that’s just part of my job. The good news is that you turn to us here at StreetAuthority because you want to be better than the average investor. And that’s great.

And to understand why most individuals are bad at investing (and to remedy the situation), it’s important to have an understanding of basic human psychology.

So let’s have a little fun today with a thought experiment. (Use this the next time you’re having drinks or dinner with friends. It’ll make for some interesting discussion for sure…)

What Would You Do?

First, I’ll present two scenarios. Then I’d like you to think about what you would do in each one.

Scenario 1: Imagine that you have just been given $1,000. You have to choose between two options. With option A, you are guaranteed to win an additional $500. With option B, you are given the chance to flip a coin. If it’s heads, you receive another $1,000; tails, you get nothing more.

Which option would you chose?

OK, now stay with me here…

Scenario 2: Now imagine that you have just been given $2,000. You must choose between two options. With option A, you are guaranteed to lose $500. With option B, you are given the chance to flip a coin. If it’s heads, you lose $1,000; tails, you lose nothing.

Now which option would you choose? 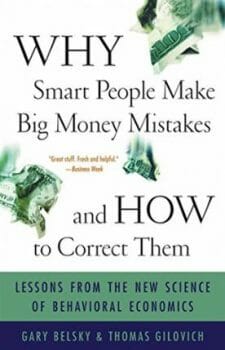 I picked this up from Gary Belsky and Thomas Gilovich’s book “Why Smart People Make Big Money Mistakes“. I’ve mentioned this book off and on over the years — it really is one of the best books out there on the field of behavioral economics. (I highly suggest you pick up a cheap used copy on Amazon or at your nearest bookstore. It’s a quick read.)

Here’s what they have to say about the two scenarios…

Traditional economic theory holds that the market is made up of rational actors. This means people make rational financial decisions based on the probability of future events. And by this logic, you should be consistent with your decisions in both cases. After all, if you choose option A in scenario 1 and scenario 2 — the certain gain in the first version or the certain loss in the second — you end up with $1,500 either way. With option B, you have a fifty-fifty chance of ending up with $1,000 or $2,000 in each scenario.

But according to Belsky and Giolvich, that’s not how most people think. When they tested these scenarios on a group, nearly all of them chose option A in the first (guaranteed to win an additional $500) and option B (lose $1,000 with heads, lose nothing with tails) in the second.

Think about that for a second. Why on earth would they do that? It makes no sense!

The answer is easy. It’s because they’re human…

The field of behavioral economics teaches us about human behavior as it relates to economic decisions. And it suggests that humans are not rational when it comes to finances.

This phenomenon is apparent in the two scenarios provided above. After all, your choices are basically the same in both scenarios. Yet despite this, most people will choose option A in the first scenario and option B in the second. This means humans have a tendency to be more conservative when it comes to booking a sure gain, whereas we’ll take more risk if it means avoiding certain losses.

As Belsky and Gilovich note, this explains why gamblers tend to increase their bets when they start losing money. They’re willing to be more aggressive to avoid finishing the evening in the red.

It also helps explain why most investors sell their winning positions too early and hang on to their losing positions for far too long. The fear of losing money on a stock is far stronger than the joy from achieving additional gains.

As you can imagine, this tendency can have a devastating effect on an investor’s portfolio.

Consider this research from Terrance Odean, another behavioral economist… The stocks investors sold went on to outperform those that they continued to hold by roughly 3.4 percentage points in the 12 months following the sale. You don’t need a PhD to understand that, over time, those 3.4 percentage points add up.

It’s important to understand our psychological tendencies. We all have them. And if we work to overcome those tendencies, our portfolios will be on the path to bigger profits.

In fact, over the past 50 months Jim’s trades have racked up a win rate of 84.68%. That’s unheard of for just about any investor and any asset class.

Want to get the details for Jim’s next trades? Go here right now.