Successful Income Investing Isn’t Just About The Yield. Here’s Why…

Suppose I offered you a million dollars cash today. Or, I could give you one penny today, two pennies tomorrow, four pennies the following day, and so on, for an entire month.

Many would choose the cool million. After all, option B would only yield a grand total of $1.27 after the first week and $163.84 after the second. But that amount will continue to grow exponentially. A steady doubling would produce a little over $5 million after thirty days.

You’re probably familiar with stories like this. They’ve been around for ages.

For example, there’s an old folk tale involving a king and a peasant that illustrates the same concept. After doing a favor for the king, the peasant asks for a seemingly humble request: To receive one grain of rice for the first square on a chessboard, two for the second, and so on until reaching the 64th square.

We already know that by the 30th square, the peasant would be looking at a half billion grains of rice — probably enough to make him the wealthiest person in the kingdom.

So where am I going with all this? Well, it’s simple. As investors, we can’t underestimate the importance of dividend growth over time. A stock might only dish out a few pennies per quarter today. But over time, that distribution could multiply several times over, greatly enriching shareholders.

So let’s try this another way. Would you invest in a stock with a dividend yield of 1%? Probably not if you’re an income investor. But by definition, dividend investing is a long-term approach to systematically build wealth over time. So it’s not about what a stock paid last quarter, but what it might distribute over the next 10 to 20 quarters or more.

That being the case, dividend growth prospects should always factor heavily into your decision.

Consider Lowe’s (NYSE: LOW). Just 10 years ago, the home improvement retailer offered a meager 16-cent quarterly dividend, barely enough for a payout of 2%. But the distribution rose relentlessly each and every year thereafter. Before long, the dividend doubled, and then nearly doubled again. The latest hike brought the quarterly payment up to $1.05. 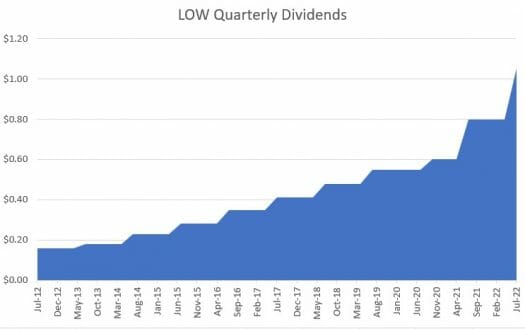 And this is what gets lost on most investors… Sure, the stock has gone on an amazing run. But investors who bought just a decade ago are also earning a yield-on-cost of nearly 20%. And they would have collected substantially more income along the way than with stocks that had a higher starting yield, but fewer and smaller dividend increases.

Meanwhile, the strengthening bottom line that fueled those dividend hikes has also propelled the stock from around $22 to nearly $200. So the dividend yield hasn’t really changed much over the years and still stands around 2%. But investors would be sitting on a total return more than 800%.

One last hypothetical scenario: Would you rather take a job that pays a flat $50,000 annual salary with no growth, or one that pays $40,000 to start, with 10% yearly pay hikes?

The first job would generate $500,000 in cumulative salary over the ten-year period. The second, while less lucrative in the early years, would reach $50,000 in salary by the fourth year and continue to grow ever higher. By the tenth year, you would be pulling in $94,000 annually and would have earned a total of $637,000.

Now, if we drop the extra zeroes and add a percent sign, you see what I’m really getting at.

While a 2% or 3% yield won’t put as much money in your pocket today as a 5% yield, it might well generate significantly more cash over the next five to 10 years if the payouts are growing at a faster pace.

And if the math is compelling for stocks with modest 2% yields (like Lowe’s), then you can imagine the potential for stocks that yield more and continue to raise their dividends well into the future.

Take my advice: income investing isn’t just about the yield. Dividend growth is the name of the game. And it’s about to become even more popular for a couple reasons. First, stocks with rapidly rising dividends will help investors be better equipped to keep pace with inflation. Second, strong double-digit dividend growth is becoming increasingly hard to find.

My High-Yield Investing subscribers and I are laser-focused on finding the absolute best dividend growth stocks out there. That’s because, as the examples above prove, it can be more than worth it over the long-haul.

It’s also why I just released a brand new report on 5 bulletproof income stocks you can buy today and own for the long haul. If you’re interested in learning more about these picks, simply follow this link.