The One Thing Every Stock You Own Should Have…

On the surface, becoming a successful investor seems easy: Simply buy low and sell high. The bigger the difference between your entry point and exit point, the more money you make.

The problem is that it’s not quite that simple.

But it’s that very maxim that forms the foundation of investing — the pursuit of finding that next great deal. That’s why, over the years, scholars and investors have developed an arsenal of financial tools, models and metrics to help pinpoint stocks trading for less than they are really worth (or shorting stocks that are trading for more than they are worth).

However, even once you find a stock that is trading well below its “fair value” there are still many potholes to steer clear of en route to a profit.

Take auto manufacturer General Motors (NYSE: GM), for example. The stock currently trades around $57 per share. Its forward price-to-earnings ratio of about 9 looks like a “deal” — on the surface. But investors should proceed with caution. The automaker’s debt has ballooned to $110 billion, up from $12 billion in 2010 when it exited bankruptcy. It has a massive pension liability, and to top it off, the company has been heavily involved in subprime auto loan lending.

In short, the future doesn’t look great for General Motors. For the sake of argument, let’s say that the company combats these major concerns and gets back on track, making you 30%. But it takes ten years to do so. All of a sudden that 30% upside over ten years doesn’t look so appealing. Especially when you could be invested elsewhere that could possibly get you 30% in a year or two.

A major mistake of many investors is ignoring the time aspect involved with investing. The opportunity cost of holding an investment that squeaks out a meager 30% in 10 years can be devastating to building long-term wealth.

Granted, it’s hard to say for certain when any investment will reach its full potential. The hope, naturally, is the sooner, the better.

When researching my next investment idea I begin with the typical financial route. That is examining financial statements, reading through SEC filings, discounting future cash flow, comparable analysis, and so forth. But while I’m doing this research there’s always one thing that I’m always looking out for. It’s not a special line item you’ll find on a company’s balance sheet or anything of that nature. What I’m looking for is essentially a rogue wave that could disrupt my or any other analyst’s model.

In short, I’m looking for a catalyst.

What A Catalyst Is, And How It Makes Investors Rich

The textbook definition of a catalyst is “an agent that provokes or speeds significant change or action.” In the business world, anything that tilts the playing field and can either work for you or against you.

Simply put, a catalyst can disrupt the financial models and attract unusually strong buying interest — or spark a selloff — in a stock or industry group. They can come from almost anywhere: a management shakeup, a disruptive new technology, an accretive acquisition, a major court ruling, a shift in Federal Reserve monetary policy…

Sometimes a catalyst can be as innocent as a change in weather. For example, unseasonably cold and snowy winters can be a boon for utility companies that supply heat to those regions. On the other hand, those same cold and snowy conditions can hamper inbound and outbound shipments and in the extreme can affect such things as auto sales.

Other times a catalyst is so massive that it not only dramatically changes the trajectory of a company’s share price, but revolutionizes industries and has a major impact on our everyday lives.

There’s no more obvious example than Apple (Nasdaq: AAPL), which at the turn of the century was a marginally profitable computer company with a small but loyal user base. That all changed on October 23, 2001.

That was the day the company released a new portable mass-storage music device that could hold enormous amounts of data: the iPod. That innovation, along with the iPhone, revolutionized first the music industry, then the mobile phone industry, and made Apple one of the most profitable companies on the planet.

The loyal user base that invested in Apple prior to the iPod launch has enjoyed a stellar ride and made a windfall of cash along the way: 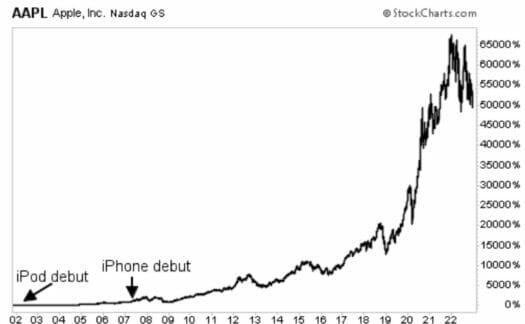 Apple provides a textbook case study on just how powerful catalysts can be. Of course, it’s easy to look back now and see that an investment in the fledgling tech company back then was a no-brainer. But back then we had no way of knowing for sure that the iPod would spawn an entire ecosystem of phones, tablets, and other devices.

Most companies will never be mentioned in the same breath as Apple. But you can see how catching the wave of a major catalyst can be life-altering.

For the most part, every stock I own is benefiting from at least one catalyst. My advice: make sure you every single stock you own has the potential to benefit from at least one strong catalyst in the near future, if it’s not already.

Editor’s Note: Elon Musk just made a MASSIVE announcement about his latest innovation…

Reports indicate that his latest project will usher in the beginning of a new era for the internet. And while the tech behind this secretive project is impressive… it’s an even better opportunity for your portfolio.

Discover how to profit from Musk’s big reveal right here.