Investing is tough. It’s an emotional roller coaster that can bring fear, anxiety, frustration and a slew of other feelings. Then it’s only compounded by the fallacies espoused by the mainstream media, such as “buy and hold,” “dollar cost averaging” and “compounding.”

Sure these are all great in theory, but the problem is that for most investors it turns into “buy and fold,” “buying more of a losing position” and surprise “compounding losses.”

Just ask anyone who invested in the “safe” solid blue-chip Intel (Nasdaq: INTC) back in 1999 and was told to simply buy and hold and they would be rewarded…

Yet, after more than a decade check out how that “buy and hold” strategy performed: 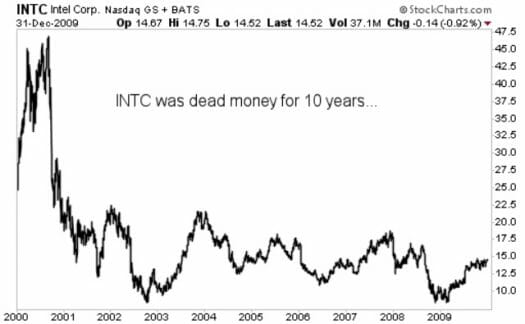 But what’s perhaps worse than the frustration those investors went through or the fact that their “safe” blue-chip stock lost them money is the fact that they just lost those 10-plus years.

The time aspect is the real kicker. You can eventually recover from a loss, but you can never make up for the lost time. And it is time that is crucial to reaching your investment or retirement goals.

Of course, the time and risk aversion components of investing are rarely talked about in the mainstream media. Instead, they insist that if you sell, you’re going to “miss out” on some level of the bull market. But the problem is that they never tell you the devastating effects that large losses can have on your portfolio.

Understanding how to manage the inherent risks associated with investing can be the difference between making money in the market and hitting your investment goals, or losing a fortune. This is why every great investor in history is defined by the methods by which they manage their investments. Not only when they buy, but more important, when they sell.

The difference between a successful long-term investor and an unsuccessful one comes down to following some simple rules. Longtime readers of my premium newsletter, Maximum Profit, should recognize these rules. I talk about them regularly in the pages of my newsletter. That’s because while we use a proven system to identify solid companies with sustained price momentum to give clear “buy” and “sell” signals, it still comes down to the individual following those rules to achieve success.

But despite their simplicity, they seem to be some of the most difficult rules for individuals to follow. But they’re so important.

Investment Rule #1: Let Winners Run — you can trim winning positions to “take money off the table” or bring them back to their original portfolio weights, but don’t cut a winner short just to prove to yourself that you were right.

Investment Rule #3: Keep Your Emotions In Check — don’t get swept up in the short-term movements of the market, or allow the media and Wall Street to bully you into buying or selling your investment. Think for yourself.

Investment Rule #4: Be Patient — as with investment rule #3, there’s never a rush to make an investment and there’s nothing wrong with sitting on cash until a good deal that you like comes along. As Warren Buffett says, “What’s nice about investing is you don’t have to swing at pitches… You can wait for the pitch you want.”

Remember, when investing you are going to take some losses. It’s just a matter of how big of loss you’ll suffer before you throw in the towel. That’s why it’s so vital to have a system or rules in place before you even hit that “buy” button.

A Challenge To Become A Better Investor

If you’re looking for a way to become a better investor, the I’d like to invite you to give my newsletter a try. There are no strings attached. If you follow these rules after learning more about how my system works, I’m confident you’ll not only have more winners in your portfolio — you’ll also cut losers faster and move on to the next winning pick.

It’s all thanks to an “anomaly” I discovered after months of painstaking research. And our track record of using this to our advantage speaks for itself

You can learn more about it here.