This Stock’s High Yield Is Basically Set In Stone

Retirees searching for income have been forced to make an uncomfortable compromise. With bond yields trading near a record low for most of the last eight years because of the financial crisis, many retirees were forced to shift out of bonds and into dividend stocks.

This solved the problem in the short run. But in the long run stock dividends are much less reliable than bond yields. Depressions, world wars, and recessions have forced even the best companies to cut their dividend payments.

That’s why I want to share one of the most reliable dividend payers in the history of the stock market. This S&P 500 leader has been paying a dividend for 132 years, surviving all the traumatic global events of the last century and then some.

If you’re looking for one of the most reliable dividends on the planet, this is a good place to start.

Consolidated Edison (NYSE: ED) is one of the oldest utility companies in the United States, founded all the way back in 1823 — almost 200 years ago. Since then, Con Ed has evolved into one of the largest energy companies in the country, reporting revenue of $13 billion in 2016 and assets of more than $50 billion.

Con Ed Has Been Paying A Dividend For 132 Years
Con Ed’s dividend payment has survived the most traumatic events in the history of the United States and the world, including World War I, the Great Depression, World War II, the stock market crash of 1987 and the financial crisis of 2008.

Con Ed has continued raising its dividend payments by an average of nearly 2% per year during the last 10 years, enough to keep pace with inflation. Take a look. 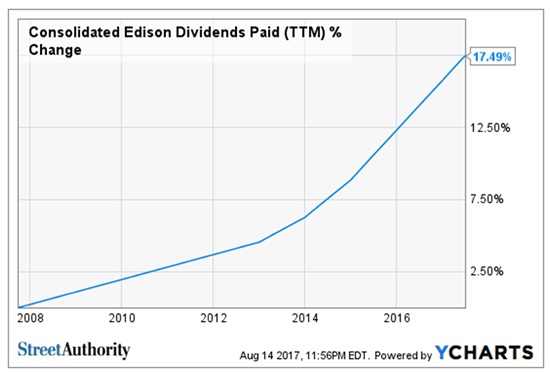 There’s a good reason Con Ed has been such a reliable dividend payer. It benefits from a powerful and rare competitive advantage.

Con Ed’s Dividend Is Protected By A Legal Monopoly
Con Ed’s dividend payment is protected by a legal monopoly. In exchange for letting regulators set prices and profitability ratios, Con Ed has been granted the exclusive rights to distribute energy services to millions of customers, protecting the company from upstart competition.

While a legal monopoly keeps upstart competition at bay, Con Ed has another powerful advantage up its sleeve — inelastic demand. Simply put, Con Ed provides a critical service that the public can’t live without. Even when the U.S. and global economies are slow, consumers still need to purchase electricity.

That was most recently on display during the financial crisis of 2008. While sales were falling in most other sectors, Con Ed’s revenue hit a fresh all-time high. 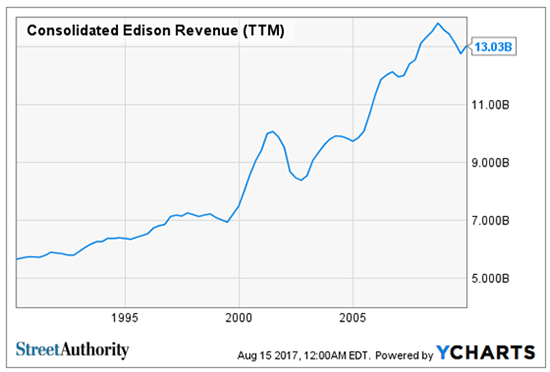 Con Ed Is Looking To The Future
Looking forward, I am expecting Con Ed to continue paying its reliable dividend for another 132 years. The company currently invests about $2 billion every year to maintain its infrastructure.

This seemingly-sleepy utility is surprisingly innovative. Con Ed is proving to be a global leader in the migration to renewable energy. Its stated goal is to generate half of New York City electricity from wind or solar by 2030.

There’s no question that sounds like a lofty goal. But when you see the data you’ll understand it’s realistic. In 2006, Con Ed had just 1.1 megawatts of solar installed, enough to power just 165 homes. By 2015, that number had exploded to 94.8 megawatts, enough to power 14,220 homes.

Today, Con Ed has evolved into the fifth-largest solar producer in North America. This rapid growth in solar has been driven by a string of projects and acquisitions. For example, in 2013 in its White River plant in California, Con Ed completed a 20-megawatt facility with more than 90,000 solar panels.

In May of 2015 Con Ed announced it had purchased six solar photovoltaic projects in California with the ability to generate 140 megawatts.

This attention to maintaining infrastructure and investing in new technology has Con Ed on pace to deliver plenty of earnings growth to support its dividend payment. Earnings are on pace to expand 2% in 2017 and another 4% in 2018.

Con Ed Is Up More Than 110% Since 2009
With investors starved for income due to low interest rates, utility stocks are in favor, particularly the most reliable among them. 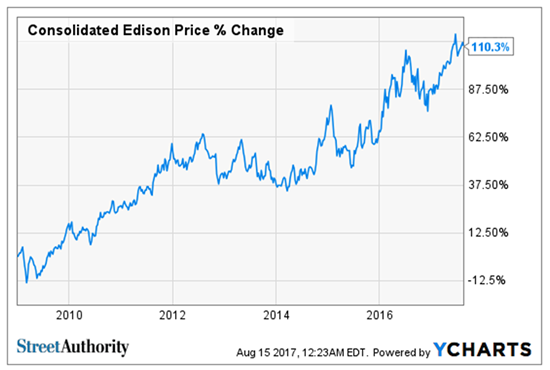 Those are big-time gains for a utility stock.

Risks To Consider: I view Con Ed’s move into solar as a net positive. However, it is a departure from the core business model it has relied on to pay a dividend for the last 132 years.

Action To Take: Investors looking for one of the most reliable dividends in the history of the stock market need to take a look at Con Ed. This company has been paying a dividend for 132 years and offers a current yield that is a 67% premium to the S&P 500.

Editor’s Note: On average, a handful of investors quietly make $1,543 a month with this simple, three-step system. Some, like Larry from Washington, will bank six figures this year. To find out what you’re missing, click here NOW…