Going Back To The Well For A Reliable Trade

Many people seem to believe that history began when they first became aware of the world around them.

At least, that’s how everyone acts.

In some areas, we never seem to learn from history. Too many of us believe everything we see is unprecedented. While that may truly apply to a few things — I, for one, cannot find a historical precedent for the idea of “Keeping Up with the Kardashians” — much of what we are seeing now has happened before.

In the stock market, we also see familiar patterns. Stocks are overvalued — certainly not the first time that’s happened. However, this time, we are seeing a rather extreme valuation. Below is a chart comparing the value of the stocks in the S&P 500 to the gross domestic product (GDP). That ratio is shown as the red line. The blue line is a broader indicator that compares the value of exchange-listed stocks to GDP. 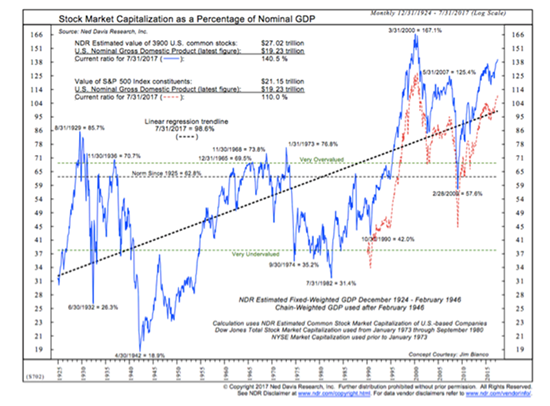 Both measures show stocks are more overvalued now than then they were even before the 2008 bear market.

Valuation is not a timing tool. Stocks can remain overvalued for years.

But it is a warning.

History tells us that, when stocks do decline, losses in the bear market are likely to be significant.

To avoid large losses, I am continuing to focus on short-term ideas with minimal risk. Just recently, I told my readers about another opportunity in Deckers Outdoor (NYSE: DECK).

Going Back To The Well
I’ve written about DECK a few times in my premium options newsletter, Income Trader. Our most recent trade in the stock expired in July, shortly before the company reported earnings.

That report was much better than expected. While analysts were expecting a loss of $1.67 per share, DECK reported a loss of just $1.28 per share. Revenue of $209.7 million was well above expectations for $178 million.
Management explained that some of the unexpected additional revenue came from earlier-than-expected sales in the company’s fall line. Even though that last-minute wave of sales helped the company beat expectations in the most recent quarter, it will unfortunately result in weaker sales in the current quarter.

Analysts responded to the news by adjusting their forward outlooks. They now expect earnings per share (EPS) of $1.03, down from $1.26 a week ago, although full-year EPS estimates increased slightly to $4.07 from $4.04.

Based on the recent earnings report, my expectations for the stock are the same as they were in late June, when I last wrote about DECK. Back then, I noted:

“Historically, stocks in the footwear industry have traded with an average price-to-earnings (P/E) ratio of 18.9. With that P/E ratio and this year’s expected earnings, a reasonable price target for DECK is $76.”

At current prices near $65, DECK remains undervalued. We can confirm that by looking at technical indicators, which also show the stock is likely to move higher.

#-ad_banner-#Buying 100 shares of DECK at $57.50 each would cost $5,750. To initiate this trade, your broker will likely require you to deposit a percentage of that obligation in your account, like a down payment on a house. This is called a “margin requirement.” It usually runs about 20% of the amount it would cost you to buy the shares. This DECK trade would require a margin deposit of $1,150 (20% of $5,750).

This is the win-win proposition of my conservative options strategy. We’ve notched a 90% win-rate with our trades during the lifetime of Income Trader, leading many of my subscribers to earning hundreds — sometimes thousands — of dollars in income each month.

If you’d like to make more trades like this, I’ve got a special report you can check out to learn more. Income Trader is a weekly publication, so if you sign up, you’ll get plenty of opportunities to generate income selling puts and covered calls. For information on how to execute this strategy, go here.