Why It’s Time To Take Some Profits Off The Table

By just about any measure, one of the hardest things for an investor to do is decide when the time is ripe to start selling some, or all, of a portfolio. For me, that time has arrived.

Now, don’t get me wrong. I’m not selling my entire portfolio and moving to cash. But it is time to sell some of my holdings because, for me, the market is getting into dangerous territory.  And I’m becoming more convinced a correction is coming.

You see, should the bubble burst in the bond market, rates are likely to rocket higher over a relatively short time. Now, you may ask what might precipitate such an event?

Janet Yellen has made known her desire to unwind the Fed’s balance sheet. I say “amen” to that. But doing so at a time when interest rates are rising is fraught with danger.

That’s because when the central bank withdraws liquidity by selling its bond holdings, long-term interest rates must rise sharply. And because bond prices move inversely to interest rates, bond prices will plummet.

Since hitting their respective bottoms in 2009, all three major indices have returned triple digits. And that’s even counting the sluggish tenure of Barack Obama, where 2% GDP growth became something to write home about. 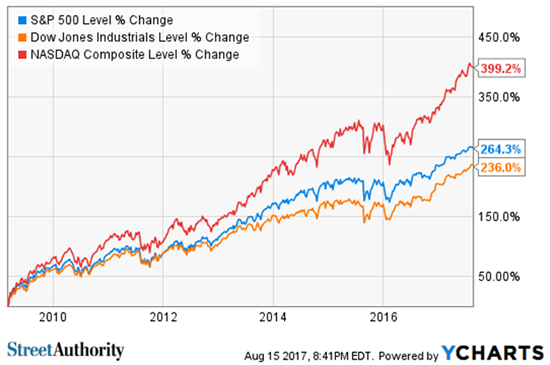 Of course, the main reason for the unprecedented market moves during Obama’s tenure was the liquidity made available by Fed actions. But what happens when that liquidity goes away?

The Fed taking away the punchbowl at a time when interest rates are moving higher portends a return to the stagflation of the Jimmy Carter era. For those too young to remember, inflation accelerated unabated during the 1970s — while GDP barely budged.

Now, any return to stagflation would be devastating to stock prices as capital moves from equities to fixed income securities.

Worse, this scenario could accelerate very quickly should corporate earnings decline from the somewhat rosy expectations which are currently propping up stock prices. This may already be the case — current expectations are that the earnings growth rates for companies in the S&P 500 will decline from 8% in 2017 to 5% in 2018.

But should Fed actions topple the bond market, it’s not out of the realm of possibility that earnings go to near-zero growth next year. But either way, stock prices can’t remain at these levels with such headwinds.

What’s an Investor to Do?
For investors with a longer time horizon, say more than 15 years, nothing more than an allocation check is warranted. But for investors working with short-term goals, it might be time to prune the portfolio.

My plan is to take profits immediately on stocks that have moved 20% to 30% higher than my entry price. Those stocks are likely to decline sharply should the market correct suddenly. For stocks with gains greater than 30%, employing a tranche system to selling is most appropriate.

What is a tranche system?

Think of it as a reverse dollar-cost averaging technique used when buying shares of stock. It’s really nothing more than a system whereby a stock is liquidated over time while the stock continues climbing. In other words, I sell the position into strength in an attempt to increase my average gains on a position. I typically sell a position over several months at roughly 20% of my total position at a time.

And although tranche selling is contrary to the way most investors sell a position, the absolute best way to sell a stock is while it’s on the way up, still advancing, and looking strong to other investors.

Now, by following this disciplined approach, investors lock  in the kind of gains that lead to large, overall profits in an investment portfolio over a long period. And it virtually guarantees a successful retirement.

For a few stocks in my portfolio, no action is required. You see, just because I expect a market correction, it would be less than prudent to assume that all of my stocks will suffer significant declines.

So stocks like Nvidia (Nasdaq: NVDA), where my cost basis is less than $30, will be held despite any downturn. That’s because my investment thesis for buying the stock in the first place remains intact.  This is true for several other securities in my portfolio.

Similarly, my long-term holdings, like Microsoft (Nasdaq: MSFT) and Apple (Nasdaq: AAPL), which I have owned for two or three decades are relatively immune from the wealth-destroying effects of a downturn. Here my cost basis is measured in pennies, so any market correction will have a negligible effect on my net worth.

The Bottom Line
For many investors, due diligence is conducted on entry into a position. That’s as it should be. But at the same time, investors do themselves a terrible disservice by not applying the same level of care on exiting a position.

Risks To Consider: Timing any market correction is, by nature, imprudent. An investor must take into consideration the opportunity costs associated with a particular action, as well as potential tax consequences of selling positions not covered by a tax deferred retirement plan or annuity. Applying a tranche method of selling out of a position will help mitigate some risk, but should the market continue rising, future profits will be lost.

Editor’s Note: This little-known indicator predicted the last market collapse… and can save you from the next one too. Full details here.