I had a busy summer. Whether it was helping one son with his Eagle Scout project, shuttling the other one to out-of-state lacrosse tournaments for his summer travel team, or expanding my business, there wasn’t a whole lot of time for leisurely summer stuff.

The market has had a busy summer as well. Since the middle of May, the S&P 500 Index has surged nearly 4.5% while the index has climbed more than 10% year-to-date. On the bond side of the market, yields on the 10-year Treasury have fallen nearly 8%, causing pundits and investors alike to fret over extended valuations and low yields.

On the surface, it would appear that they’re right. But they’re not diving deep enough. Relative value and attractive yields are out there.

One fund that’s caught my attention is the Franklin Limited Duration Income Trust (NYSE: FTF). With total net assets of around $300 million, FTF focuses on providing investors a high rate of income by taking a bottom-up approach when selecting primarily asset-backed securities.

#-ad_banner-#As the fund’s “limited duration” moniker suggests, its managers aren’t reaching to the long end of the yield curve in order to generate return. The fund’s average duration stands at just 2.24 years, with its average weighted maturity at just 4.62 years.

For those feeling lost, let’s review some bond basics. The definition of a bond’s duration is explained as the approximate measure of a bond’s price sensitivity to changes in interest rates. Since the average duration of FTF’s portfolio is right around 2 years, the prices of the bonds held, theoretically, should fluctuate about 2% in either direction (up or down).

Clearly, the find manager doesn’t buy any green bananas, thereby managing the risk appropriately. So where does the yield come from?

While 35% of the fund’s portfolio is currently allocated to high-yield bonds (often described as “junk bonds” due to their below-investment-grade ratings), the chosen securities are towards the top of the quality range for high-yielders, with 60% of all fund holdings rated between B and BB. This means they are higher quality “junk,” if you will. Another 29% of the mix falls into the investment grade column, a cut above these “junk” bonds in reliability if not in income.

Another source for higher income is floating rate loans. These are typically long-term obligations syndicated by banks. Because they are bank loans they also have a higher credit position in a company’s capital structure and are typically secured by some sort of collateral. Floating rate instruments are also particularly timely in that interest rates, going forward, are more likely to rise rather than fall.

The fund also has the ability to use leverage; borrowing money to juice up returns. Although the use of leverage is a risk factor, the opportunity to use that tool in the current low-rate environment outweighs any immediate risk.

Lastly, I’m impressed by behavior of the fund’s trading price. 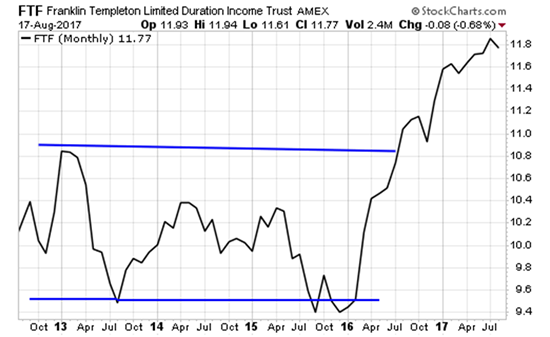 Over the past three years, it appears that shares have traded in a relatively stable, predictable band. If you’re a wiggle reader, recent movement would indicate that fund shares are starting to break out of that pattern and pick up some steam.

Even more encouraging is that even after moving 24% in a year, the fund still trades at an attractive 10% discount to its net asset value (NAV).

Risks To Consider: As with many closed-end funds that use leverage, a rising rate environment poses the most immediate risk. That’s a genuine concern for a fund leveraged by 31. That said, rates are still extremely low and although the Federal Reserve is doing their best to change that, any real increase will take a while to materialize.

Action To Take: As of this writing, shares of FTF currently trade around $11.77 and pay a handsome 10.9% yield. While the fund has had a healthy move to the upside, shares still trade at an attractive 10% discount to their $13 NAV. Investors looking for a higher level of income could position themselves for a potential total return in excess of 20%.

Editor’s Note: Want an extra $86k in your account? Then you need to check out the 408(a) Program… and see how it can make you an extra $86,447 with zero effort. Used the right way, this IRS-approved maneuver can also turn a no-frills $60k per year retirement into a $324,000 per year vacation. So how can you get into the 408(a) Program yourself? It’s all right here…