The Most Undervalued Tech Stock On The Planet

One of my favorite scenes from the brilliant Steve Martin film The Jerk was when the deranged sniper played by C. Emmett Walsh is firing at Martin’s character, the hapless gas station attendant Navin Johnson, yelling “Die milk face!” The sniper’s aim is poor and as the bullets whiz past him, Martin yells, “He hates these cans!”

Having been a long-time bull on the seven-million-pound networking gorilla Cisco Systems (Nasdaq: CSCO) and for quite a while, I’ve felt a little like Navin Johnson where the market is the sniper and I’m running around yelling “It hates this stock!”

What am I missing? 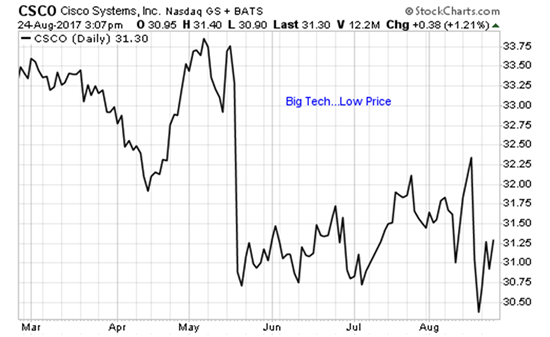 Big Tech, Low Price
On average, the company has grown earnings per share at an 11% annual rate over the last four years. The common dividend per share has grown at a 13% annual rate for the same time period. Total cash per share is a staggering $14.12, representing 45% of Cisco’s current share price.

#-ad_banner-#Rationally, this is a stock investors looking for high quality, blue-chip brand names should own. But investors and markets are rarely, if ever, rational.

The biggest concern the herd has is revenue weakness. For fiscal year 2017 (Cisco’s ends in July), the company finished with $48 billion in annual sales, a 2.43% dip from 2016’s $49.2 billion. What was the reason for this? Over the last few years, the company has been concentrated on growing its software and services businesses. One component of this transformation is the company’s switch from a contract to a subscription revenue model.

While 45% of the company’s revenue mix still relies on selling its market-leading switching and routing hardware (60.7% globally for Ethernet switching and 70% for enterprise routers), 24% of Cisco’s revenue now falls under the “service” column. In its reporting, the company refers to this as “deferred revenue,” which is defined as a product or service not yet delivered to a customer and will show up as a liability on a company’s balance sheet.

In Cisco’s case, if a customer is paying on a monthly basis for a subscription service, the fees they will pay in October will not be recognized until then therefore it will not be included in a mid-year earnings report. However, in time, the company’s revenue stream becomes much more predictable regardless of the accounting treatment.

In the company’s most recent annual report, subscription and software deferred revenues mushroomed 50% from $3.308 billion in 2016 to $4.971 billion for the end of the 2017 fiscal year. That’s growth, hands down.

Like every smart, successful big tech company, Cisco is executing on the transition from hardware to software and services which over time will lead to higher margins and increased earnings per share (EPS).

To further grow in this space, Cisco is dipping into its massive $70 billion cash pile to fund acquisitions. Most recently, the company announced plans to acquire hyper-convergence software firm Springpath for a measly $320 million.

Putting company-specific minutiae aside, the real story is in the “Internet of Things” (IoT) big picture. According to Business Insider’s BI Intelligence, by the year 2020, 34 billion devices will be connected to the Internet. And that’s not just computers and mobile devices, it’s cars, televisions, farming irrigation systems, and refrigerators. You name it — it will be connected.

By 2020, it’s estimated that businesses will have spent nearly $9 trillion on global IoT investments. Cisco’s market position in networking and related services and their ability to execute successfully ensures that a decent portion of that $9 trillion will find its way into the company’s cash register.

Risks To Consider: The biggest risk facing Cisco is their ability to execute. A significant business shift from hardware to software and services is never a simple task for a huge, mature, tech company. However, based on reports and the growth trajectory of the areas they want to move toward, it would seem they are doing everything right.

The macro challenge facing Cisco and all capex-dependent tech companies is the overall health of the economy. A recession can put the brakes on growth faster than a jack rabbit on a date. But the Internet has become a business necessity, almost a utility. The notion that everything Cisco sells is integral to accessing that utility provides a relatively deep moat of defense even in an economic downturn.

Action To Take: Investors looking to add technology names but discouraged by the lofty valuations in the FAANG names (Facebook, Apple, Amazon, Netflix, Google), would do well by picking up bargain priced shares of Cisco.

Currently, the stock trades around $31.55 (an 8.8% discount to its 52-week high) with a forward P/E of 13 and a growing 3.7% dividend yield. If the company continues to successfully shift its business model and maintains the growth of its subscription based revenue stream, shares could reach a 12- to 18-month price target of $38.

With the dividend, the result would be a 24% total return. I would encourage investors to hold the stock longer, though, considering its solid dividend and dividend growth history.

Editor’s Note: With reports of deteriorating production, performance, and revenue… this high-profile CEO is ditching his auto empire. Now he’s set his sights on an even more lucrative business. And if you jump in at the ground level of this opportunity you can ride it upward to sky-high profits. Grab a piece of this $1.3 trillion industry in the making today.