A Backdoor Way To Profit From The Cryptocurrency Rush

Cryptocurrencies have been red-hot in 2017.

These mind-blowing gains have not gone unnoticed. Everyday investors now want to learn how they can get in on the action.

Looking forward, I am bullish on cryptocurrencies. I think there is plenty of upside left, even with the massive gains we’ve seen already.

However, as someone who has bought and currently owns bitcoin, ether, and litecoin, the reality is that buying and holding cryptocurrencies is still extremely risky.

#-ad_banner-#Not only is it more complicated to buy cryptocurrencies than stocks, but both crypto exchanges and personal crypto wallets are vulnerable to hackers.

For example, in early July more than 150,000 ether coins, worth more than $32 million at the time, were stolen from three ether projects being developed by Edgeless Casino, Aeternity, and Swarm City.

That theft sent shockwaves through the crypto community, reminding both developers and investors of the risks involved in investing in this bleeding-edge technology.

That’s why today I want to share a better way to invest in the booming crypto market.

This backdoor crypto play is much safer than investing directly in cryptocurrencies and it could potentially be more profitable in the next 12 months. Let me explain…

Nvidia (Nasdaq: NVDA) is a $100 billion global leader that specializes in developing high-powered computer graphic cards. Nvidia has pretty much dominated this market for more than a decade.

Historically, these high-performance graphic cards have been used for gaming, which require enhanced graphic capabilities to render high-speed motion more viewable. However the rise of cryptocurrencies has given birth to a whole new market for Nvidia and its high-speed graphic cards.

It turns out that Bitcoin and Ethereum miners can use Nvidia’s graphic cards to increase the speed of verifying crypto transactions.

For example, Nvidia’s mid-range gaming graphics processing unit (GPU), the GTX 1070, recently ranked as the most economical GPU for ethereum mining. Take a look below at a picture of a GTX 1070 from Nvidia’s website.

If you take a second look at the image, you can see circled in red that this product is currently out of stock. This newfound demand for Nvidia’s graphic cards has led to a problem that every company in the world would love to have.

Demand for Nvidia’s gaming cards is so high that many of its most popular products are sold out and out of stock all across the world. Miners are clamoring to get their hands on these cards right now — and very frustrated that they have to either wait or buy online from a third party at a huge premium.

This surging demand is the reason that Nvidia has been on fire this year. Earnings are on pace to expand 40% in fiscal 2017. Accordingly, shares are up 54%, more than double the Nasdaq’s impressive return of 20%. Take a look below. 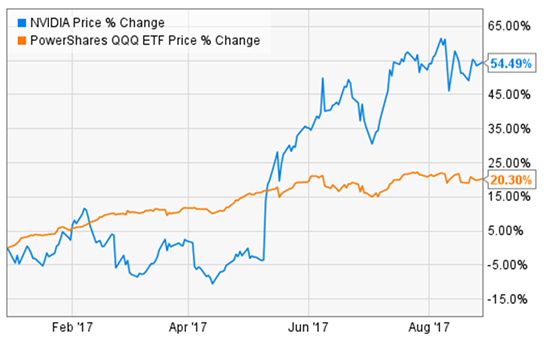 At the highest level, the cryptocurrency market is still in its infancy and gaining more traction every day. I am expecting more companies and consumers to adapt cryptocurrencies and for that to fuel more profits for crypto miners. That will in turn fuel demand for Nvidia’s graphic cards.

Secondly, Nvidia is working hard to develop crypto-specific gaming cards. The company recently released specially tuned versions of its GeForce GTX 1080 and GTX 1060 graphic cards. Both of these products are well reviewed on the Internet and verified to improve mining “hashrates,” a key performance metric.

Further down the line, ether isn’t the only GPU-centric cryptocurrency. If the price of mining ether coins becomes too costly, I expect new cryptocurrencies to sprout up and fuel demand for Nvidia’s cards.

Also, Nvidia isn’t a value stock — it’s a momentum stock. You’d be hard-pressed to find another stock in the S&P 500 with more momentum than Nvidia.

Risks To Consider: Right now analysts are projecting slower growth for Nvidia in fiscal 2018, calling for earnings growth of 7.32%. That would still be a respectable year but I think analysts are vastly underestimating the strength of the crypto market. That’s why I say ignore the skeptics — the crypto mining scene is just getting started.

Action To Take: Nvidia is one of the hottest momentum stocks in the S&P 500 in 2017. Buy right now and look for shares to close the year trading at an all-time high.

Editor’s Note: You might think Tesla would be Elon’s cash cow… but it’s not. You’ll be surprised to find he’s got his eyes on an even more lucrative endeavor. One that’s potentially bigger than GM, Toyota, and even Apple… combined. Click here to grab a piece this trillion-dollar golden goose for yourself.