Before I get into today’s essay, I want to send my thoughts and prayers to all those affected by Hurricane Harvey. Last week, I made countless calls to friends in the Houston area to ensure everyone was OK. Many had fled their homes, but those who stayed told me they’d never seen flooding or devastation like this.

As the days tick by, the full extent of the damage is yet to be revealed.

While the storm’s high-powered winds fizzled quickly, the torrential rains persisted. By mid-week, Harvey had dumped more than 50 inches of rain on across a large swath of Houston. (If you’re wondering, that’s 26% more rain in a few days than Seattle gets in an entire year.)

As I write this, search and rescue efforts continue, and all those assessing the damage can do is wait and see what’s left when waters subside. At the very least, this storm will cost tens of billions of dollars in damage; at worst, it could permanently change many cities and towns in the region and wreck the federal flood insurance program.

In a typical knee-jerk reaction, investors have been pushing crude oil prices higher. The thinking is that oil production in the Gulf region will be slowed, sending prices higher. But I think they’ve got it all wrong.

What most investors don’t know is that the 22% reduction in Gulf oil production is likely to be bullish for gasoline in the coming weeks and months, but bearish for oil prices. Not only will oil prices weaken, but one heavily-traded security — U.S. Oil Fund ETF (NYSE: USO) — is likely to experience an even more significant decline.

Reason No. 1: As Oil Supplies Build Up, Prices Should Drop
Since many of the massive oilrigs are offshore and hundreds of feet above the gulf, it’s fairly easy to helicopter in workers and get things pumping again. But for the on-shore, flooded fuel refineries, restarting will be much more difficult. Some experts are predicting many weeks or even months of major fuel production closures.

And if you can’t process crude into fuel and other products, crude inventories will build. As supply increases, oil prices should fall.

#-ad_banner-#On Sunday, Exxon shuttered its Baytown refinery, the second largest in the United States. This single plant can process 560,000 barrels a day. Plants operated by Royal Dutch Shell and Petro Brasiliero SA were also closed down; combined, they processed another 445,000 barrels a day.

For perspective, these three plants alone account for 11% of the country’s total daily fuel consumption of 9.17 million barrels.

In other words, that’s a lot of crude not being processed.

Additionally, think of the multitude of Houstonians and Texans not driving. Thousands have been stranded or had their cars ruined. That’s hundreds of thousand of miles not being driven… Again, this should result in lowered demand.

By my estimates, at least 1.5 million barrels per day are likely to go unprocessed or be lost to decreased demand. 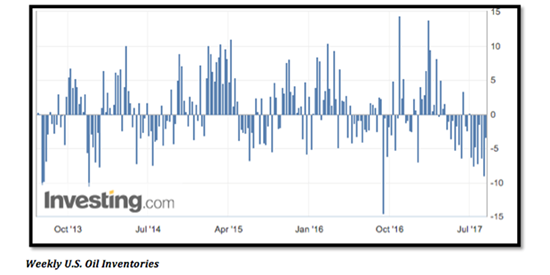 And since crude inventories have declined about 5 million barrels a week for the past eight weeks (typical for summer) and crude prices have been declining with those inventories, a huge spike of 10 million barrels or more could send oil prices plummeting like they did earlier this year.

Reason No. 2: Fall Is Already A Weak Season For Oil
Even though it’s still warm in much of the country, summer is drawing to a close, which means we’re about to enter a typically weak period for oil prices. A study conducted by CXO Advisory Group in 2012 showed that oil tends to fall with some consistency during November and December. 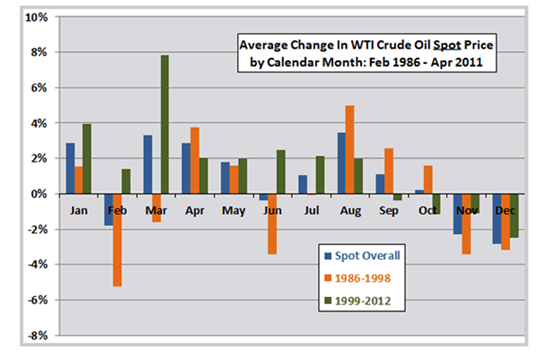 This trend has continued in the years since. From August on, you can see that crude tends to take on more of a bearish tone compared to spring and summer months.

Five miles might not seem like a big difference, but consider this: More than 75% of the 320 million Americans are of driving age. That means the difference between miles driven each day in summer months versus winter months is about 1.2 billion miles. Assuming the average light-duty vehicle gets around 25 miles per gallon, that adds up to 47 million fewer gallons of fuel being burned each day (1.44 billion gallons per month).

Talk about a slow down!

With fewer people driving and air conditioners finally being turned off, America’s energy consumption is about to see a significant drop-off. Coupled with the expected increase in oil inventories due to the refinery closures, this should push prices even lower.

Add in the continued global over supply, and, at the very least, there’s little reason to be buying oil at these levels.

Reason No. 3: When Oil Prices Fall, USO Feels The Pain
There’s a reason why I’ve selected USO for a trade in my premium options newsletter, Profit Amplifier…

It gives us even more of an edge.

It all has to do with how this ETF tracks the price of oil. You see, United States Oil Fund uses actual West Texas crude oil futures to generate its value. The ETF only uses active, current-month futures contracts, which means, every month, USO’s fund managers have to sell the expiring futures contracts and buy new ones scheduled to expire just one month out. This is called “rolling,” and it costs the fund lots of money.

Aside from all the transaction costs, oil futures cost more with the more time they have until expiration (like most option contracts).

An August oil future might cost $44, while the September future is $44.20. When the fund managers roll, they essentially lock in that loss of $0.20 over and over again.

This little-known fact is why USO has lost nearly 16% annually since August 2007. The result is an off-kilter dynamic that’s perfect for our trade today: When oil rallies, USO doesn’t rally as much… but when oil drops, USO tends to amplify the movement.

By using put options, we’ll only further amplify our potential profits from a decline.

We don’t need a full-on meltdown to grab a nice profit. I’m looking for USO to fall to key technical support around $9.10 — only 4.2% below recent prices around $9.50. USO has broken below this level twice in the past six months, so we know it’s a target shares are capable of hitting. 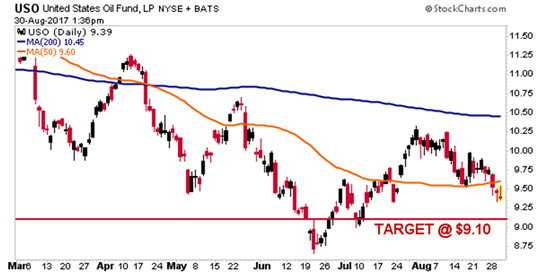 We’ll also use a December expiration date to give our trade more than enough time to work out. The way I see it, the outlook for crude should only worsen from here. Even a $0.50 move in the ETF can be exploited for a potential 18.8% gain by December.

All told, if USO falls by just 4.2%, then my Profit Amplifier readers and I stand to make 18.8% gain. That’s not bad for such a short time frame — not to mention such a small move.

It’s all thanks to the “raiding” technique my subscribers and I use to take more than our fair share of profits from the market. As I’ve mentioned before, it’s all perfectly legitimate — market pros use it every day.

If you’d like to get the full details of this trade and learn more about how our strategy works, go here.