Turn A Tiny Small-Cap Bump Into A 15 Percent Gain

Over the past 90 years, September and October have earned a reputation for being the two most volatile months for the markets. And this September is likely to be anything but predictable.

The month is already off to a rocky start. In the first few days of September, North Korea tested a nuclear-tipped missile, leading U.S. officials to warn the country is “begging for war.” As I write this, Hurricane Irma has left a trail of destruction Florida and is moving on to drench the eastern United States.

Needless to say, it’s been tough to pin down a high-probability trade lately.

That’s why it helps to go back to the well, so to speak, and revisit a previous winning trade. After all, thanks to my stock market “raiding” technique, where my Profit Amplifier readers and I extract more than our fair share of profits from trades, we can repeat winning trades again and again.

And it’s all thanks to the power of options.

Small Cap Stocks Are Looking Weak
As I scoured through potential trades, a recent winner came to the forefront — the Russell 2000 Index ETF (NYSE: IWM). We’ve closed two successful trades from small moves in this ETF in the last few months — one in June that gained 9.1% and a second in August that gained 38.9%.

Why not do it again?

Since its 7% fall this summer — from July highs above $144 to a low of nearly $134 — the index has been on a rip-snorting rally, gaining back 4% in just a couple of weeks. While I’m chalking this one up to a technical breakout/short covering rally, there was also a few economic releases that may have helped.

The problem is that little of this news, including Trump’s expected tax plan, are directly aimed at benefiting U.S. small businesses.

What I found most odd was that this rally came during a time when a hurricane was ripping through Texas, halting thousands of businesses and creating hardship for tens of thousands of Americans. At the same time, the Bureau of Labor Statistics’ (BLS) monthly employment number missed analysts’ expectations. None of this struck me as “net positive” for small biz.

Now, I know there was a relatively strong GDP report for the second quarter (that could still be revised lower), but other economic data remains mixed, and the market is stretched. GDP is also a highly volatile and complex computation that can lag real-time economic performance.

But despite the Q2 GDP numbers, the most important leading data on stock health is still earnings, and as I pointed out in my last alert, earnings for the Russell 2000 were poor.

Poor earnings are NOT catalysts for new highs, especially when sales were down more than 6% in the index!

After careful consideration, I’ve come to the conclusion that the recent rally in the IWM is a perfect entry for a fresh put option trade.

Technicals To Guide Us
The Russell 2000 is known for its volatility, which has only increased with electronic trading, high-frequency trading and other trading algorithms.

The index has rallied 10 of 11 trading days and eclipsed both its 200- and 50-day moving averages, which have helped propel the index higher.

At recent levels near $139.55, the index is priced only a few dollars above its 200-day moving average ($137). Because this average tends to hold the most weight when it comes to support, my Profit Amplifier readers and I used it as our target for trade. 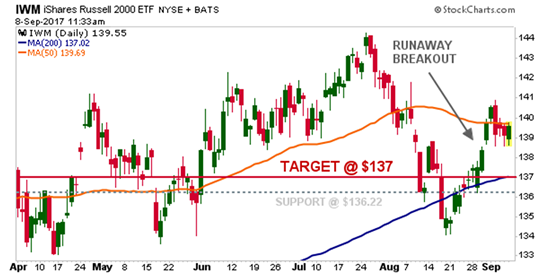 While I believe IWM can easily drop down to support at $136.22 and beyond, a 1.8% fall back to its 200-day moving average would still give us a healthy 15.4% gain by November — when the put option expires.

I can’t give away the exact details of the trade, but suffice it to say, a 15.4% gain for a 1.8% move is plenty for my risk tolerance — especially with so much chaos in the news lately.

Bottom line, using options to raid the stock market is the best way to increase your returns while preserving capital and reducing risk.

Of course, that’s only if it’s done correctly.