Jumpy Investors Just Gave You A Shot At 40 Percent Gains

With family, friends and financial interests in both Texas and Florida, it’s been a tough couple of weeks watching both states get pummeled with back-to-back natural disasters. While Irma was tearing through Florida, my parents and grandparents were hunkered down in a house just north of West Palm Beach… and like so many Americans, I was unsure of the outcome and prepared to do just about anything.

The unpredictability of these storms and the average American’s hesitance to prepare can lead to chaotic situations just ahead of landfall. Many of us witnessed (or experienced firsthand) the frenzied runs on gas and gas cans, generators, food and other home goods ahead of the storm.

But while the hurricanes battered our shores and the media helped push already frightened Americans into panic mode, investors loaded up on any company they thought would benefit from these horrible tragedies.

Call it heartless if you want, but it’s just how markets work.

#-ad_banner-#Many companies saw their prices rise, including Tractor Supply Company (Nasdaq: TSCO). In fact, before I made it the target of my latest trade recommendation to my Profit Amplifier readers, it got a 20% boost from its recent lows. By my analysis, that’s not only too large a jump, but perhaps a move in the wrong direction altogether.

The Real Story Behind Tractor Supply
Investors are known for their overreactions to just about everything. When it comes to a weather event or natural disaster, everyone fights to pile into or out of certain stocks, often with little or no research. Unfortunately, these knee-jerk reactions often turn out to be wrong.

Piling in on Tractor Supply certainly looks to be one of those mistakes. Shares have skyrocketed with Harvey and Irma, but the logic simply isn’t there. That’s probably because most of us city-dwellers don’t really know much about tractors or this company… which doesn’t really sell tractors at all.

While Tractor Supply’s name suggests heavy equipment distribution, that’s not at all what the company actually does. The largest piece of machinery it sells might be a lawn mower, or maybe a trailer to hitch on your pickup. It does happen to have a limited selection of generators in stores, which is why investors may have gotten excited in the wake of the recent hurricanes.

But because the company doesn’t sell wood, fasteners, paint, windows, doors or other materials that will be necessities in a post-hurricane rebuild, it’s unfair to value them like a Lowe’s (NYSE: LOW) or Home Depot (NYSE: HD), both of which might very well deserve a little premium.

At current prices, TSCO is trading with a forward price-to-earnings (P/E) ratio of nearly 19, which is higher than LOW’s current multiple of 17. That makes very little sense.

If anything, Tractor Supply should be valued more like a Dick’s Sporting Goods (NYSE: DKS), which trades at 9 times earnings, or perhaps Cabela’s (NYSE: CAB), which is merging with Bass Pro after disappointing sales.

And given Tractor Supply’s focus on rural-geared goods — from gardening equipment and clothing to animal feed, tools, and even chickens — its revenues are still dependent on the price of commodities and the overall health of rural communities, many of which are also dependent on those same commodities.

With commodity prices and commodity stocks plummeting, it’s even harder to justify a forward multiple of 19 times earnings.

Zacks recently listed TSCO as a “Bear of the Day,” and downgraded shares to “strong sell.” In fact, the company has been getting very little love from professionals across the board. In the past month, there hasn’t been a single analyst upgrade, and the three reiterations we have seen have all been to “hold.”

If recent weather events were really such a boon as to warrant a 20% price jump, you’d think at least one analyst would jump out and scream, “Buy!”

But there’s none of that at all.

Unless commodity prices do a complete 180 (and the retail sector in general does the same), I think TSCO can expect more of the same mediocre growth it’s been seeing for the past several quarters.

How We’re Trading TSCO
Back in September 2016, TSCO fell from highs near $95 all the way down to $65. I’ve been watching this stock since way back then — my Profit Amplifier readers and I actually made a quick 13.9% from a put trade on TSCO at the tail end of its nosedive. In the first half of 2017, shares continued their downward slide, reaching a low around $50 in July. But the recent, hurricane-fueled rally has brought them back up to $62. 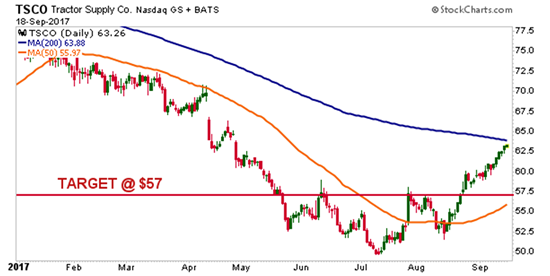 TSCO’s fundamentals have only deteriorated since I last profiled the company. Management has also warned of slowing growth and the growing competition in the retail space.

But despite those negatives, the stock’s price recently eclipsed most analysts’ high-end targets. Several analysts have targets of $55 and less on TSCO, which means that, in addition to poor fundamentals, shares are also extremely expensive. And don’t forget that analysts are “long only” and are usually more optimistic than the typical investor.

So when the stock inevitably falls back to earth, we need to be ready to profit. A move back to $57, which coincides with technical support, is the first logical step to a more realistic valuation that matches its peers. I’ve selected an option with several months until expiration, just in case it takes the market a little longer to come to its senses.

Using our option-buying strategy, we can amplify a 9.9% fall to our $57 target into a 39.8% gain in just a few short months. And even if I’m wrong, this trade breaks even at just 4% under recent prices, a move I think we can all agree is almost a given.

How You Can Get In On This Trade
While it wouldn’t  be fair to my premium Profit Amplifier subscribers to reveal the specifics of this options trade in this article, hear me out. My proven strategy could be just what you need to get through the unpredictable times ahead.

With natural disasters and political turmoil shaking up an already volatile market, it’s tough to pin down where you should be investing. But while the rest of the market has been sitting back and hoping for the best, my subscribers and I have spent the year raiding the market, taking more than our fair share of gains. I’m talking about returns of 35% in six days, 29% in four days, 31% in 10 days and 27% in seven days, just to name a few.