Your Shot At The First-Ever Legal Cannabis Drug

March of 1998 was a big month for Pfizer and its shareholders. That’s when the new little blue pill called Viagra was released.

It was a breakthrough for the pharmaceutical industry — the first ever male performance enhancement drug. Viagra’s commercial release created a new multi-billion drug market virtually overnight.

Millions of American men and women enjoyed the benefits of the drug, but the biggest winner was Pfizer shareholders. As Viagra delivered record sales month after month, Pfizer’s share price jumped 64% in 12 months. Take a look below. 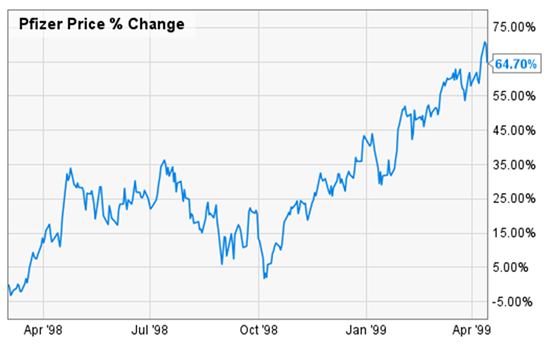 Today, I see this same pattern repeating itself in the cannabis industry. The FDA is close to potentially approving its first ever cannabis pharmaceutical — a final ruling could happen by the end of 2017, less than 12 weeks away.

#-ad_banner-#This would be a ground breaking approval for the entire pharmaceutical industry and particularly for the cannabis industry. It could also give birth to the first ever cannabis blockbuster drug. This drug could generate more than $1 billion in annual revenue.

Just like Pfizer with Viagra, this drug could send shares of this promising young cannabis biotech soaring over the next 12 months.

The Company Behind This Game-Changing Treatment
GW Pharmaceuticals (Nasdaq: GWPH) is an early leader in the high-growth cannabis pharmaceuticals industry. The company is headquartered in Salisbury, United Kingdom. Shares trade on the London Stock Exchange, but are also available in U.S. markets as an ADR on the Nasdaq.

GW is no Johnny-come-lately to the pharmaceutical and cannabis industry — the company’s been around since 1998. Today, it employs more than 500 people and has a market cap of $2.7 billion, making it the largest cannabis company in the world.

GW’s cannabis research is considered industry leading and has earned wide respect within the cannabis biotech community. Its most promising cannabis drug is Epidiolex, a CBD-based extract used to treat two types of seizures caused by Dravet Syndrome and Lennox-Gastaut Syndrome. If approved, it would be the first ever prescription-based cannabis pharmaceutical.

This is a potentially lucrative market for GW. The U.S. epilepsy drug market alone is expected to reach $5.4 billion by 2020, and GW is on target to compete for a big chunk of that revenue.

Epidiolex is close to a potential final ruling from the FDA. The drug is wrapping up the final stages of its Phase 3 clinical trials, the last stage of a multi-year process before a drug receives a final ruling.

In August, GW announced more good news on these clinical trials. More importantly GW also announced it has initiated a NDA (new drug application) with the FDA that should be finished by October. This is a huge step and sets the stage for Epidiolex to receive final commercial approval.

Looking forward, GW could receive a final ruling on Epidiolex as early as the end of 2017. However, even if Epidiolex is delayed or fails, GW is no one-trick pony.

GW Has One Of The Best New Drug Pipelines In The Cannabis Pharma Industry
GW has already released the world’s first cannabis-based prescription medicine, Sativex, which is currently approved in 29 countries outside of the United States to treat Multiple Sclerosis.

GW also has a deep pipeline of additional clinical-stage cannabinoid product candidates, with a particular focus on neurological conditions. 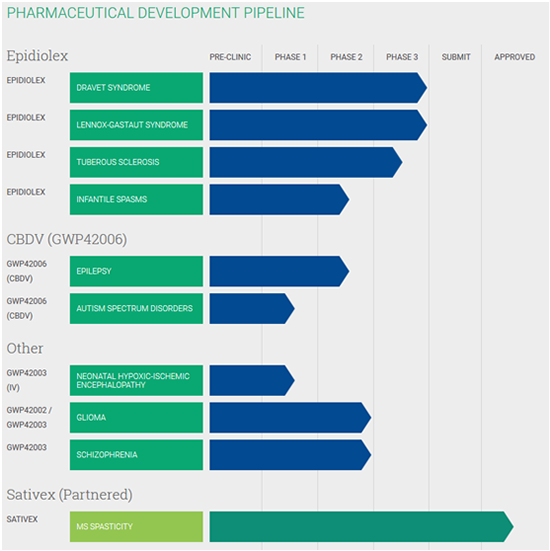 GW Is Up 170% In The Last 12 Months
GW’s profit potential with Epidiolex and its pipeline has not gone unnoticed by the Street. Shares are up 1,130% since the company went public in 2013. 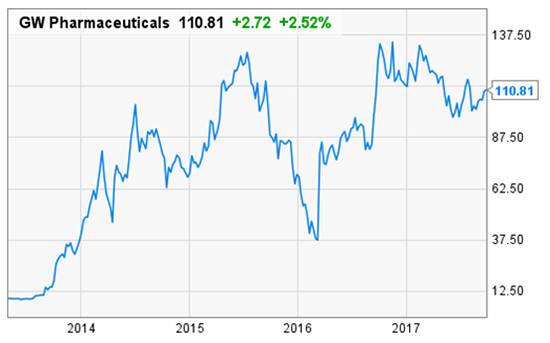 Looking forward, I am expecting to hear more good news from Epidiolex. If that happens, I expect shares to breakout into a new all-time high. The Wall Street consensus price target for GW is $185. This implies 68% upside from current levels.

Risks To Consider: GW has delayed filing the NDA for Epidiolex a number of times in the last 18 months. Although I am optimistic Epidiolex will receive final approval, this ruling is absolutely critical to GW’s success.

Action To Take: GW is an early leader in the high-growth cannabis pharmaceutical industry. Its most promising cannabis drug, Epidiolex, could receive final FDA ruling by the end of 2017. But GW now below the all-time high, wait for good news on Epidiolex and hold for the long haul.

Editor’s Note: Unfortunately, investors who blindly follow Wall Street will miss out on their share of the $1.3 trillion world-changing opportunity Elon Musk is pioneering. Because while the Street is so busy harping on Tesla failures, they’re missing how Musk’s other master plan can line investors’ pockets with huge profits. If you trust Wall Street, this is NOT for you… but if you believe there’s more money out there than they’re willing to let you in on, then grab the full details on how you can take your share of this earth-shattering opportunity.