This Iconic Blue-Chip Is Poised For Growth

By the end of the 20th century, General Electric (NYSE: GE) represented the epitome of bloated, mega-cap conglomerated largesse. Helmed by management hotshot Jack Welch, GE dabbled in everything from its traditional industrial manufacturing businesses, which included heavy capital goods like locomotives and jet engines, to household appliances and media property ownership (NBC). But its crown jewel was its finance arm, GE Capital, which was used to help customers finance the jet engines and the locomotives.

But after the turn of the millennium, GE wasn’t so lucky. The bear market that began with the bursting of the tech bubble mauled the company’s stock price, sending it down a full 56%. Prices recovered somewhat only to be hammered down by the 2008 Financial Crisis and resulting credit freeze, which threatened the very existence of the company. 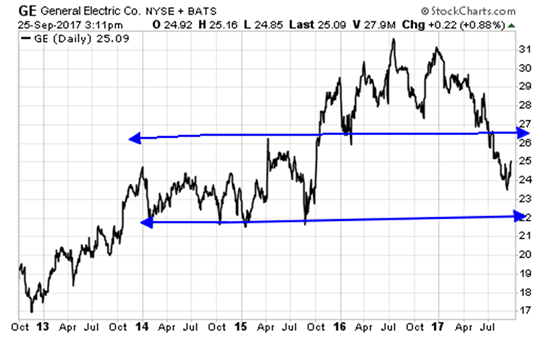 While the stock is up 195% from those 2009 market lows, it’s been a long road back and the price has more or less moved sideways for the last three years. But that may be about to change.

Jeff Immelt, the CEO that guided the company through the dangers of 2008, recently retired, handing the reins over to John Flannery. Prior to his promotion, Flannery ran GE’s highly profitable healthcare unit (the same unit Immelt ran before his ascension to the C suite) and has been with the company since 1987. GE has always built a deep bench for management talent. From Welch to Immelt to Flannery, that tradition continues today, ensuring that the company will remain in capable hands.

#-ad_banner-#However, before stepping down as CEO, Immelt began shedding non-core assets, using the lessons learned from 2008 to reshape the company into a focused, high-value capital goods manufacturer. The first major step was the sale of NBC to Universal. Immelt also began slimming GE’s highly profitable finance arm, GE capital, selling off components such as its consumer business Synchrony Financial (NYSE: SYF) via spinoff, selling the equipment financing and leasing arm to Wells Fargo, GE Bank to Goldman Sachs and its real estate and investment management businesses to Blackstone and State Street.

GE has also sold industrial assets to increase its focus. In order to speed up approval of its purchase of oil services provider Baker Hughes (NYSE: BHGE), GE sold its water unit for $3.4 billion and, most recently, agreed to sell its industrial electrical business to ABB (NYSE: ABB) for $2.6 billion. There’s even a plan to sell off its venerable, yet woefully unprofitable consumer lighting business.

Going forward, the company will concentrate on its high margin businesses: aviation, healthcare, power generation, and energy, especially oil and gas. With that new focus, management projects that 90% of the company’s earnings will be generated by the core businesses. This means $90 billion in cash can be returned to investors through dividends, share buybacks, and other transactions through 2018.

Risks To Consider: The biggest risk to GE’s successful execution is, naturally, the economy. The company is the quintessential multinational. Currently, the U.S. economy as well as capital-goods-hungry emerging economies are doing well. But this is always subject to change.

Also, Warren Buffett’s Berkshire Hathaway (NYSE: BRK.A) recently unwound its position in GE (10.6 million shares) while buying 17.4 million shares of GE spinoff Synchrony Financial. While this could cause concern, it’s more of a Buffett-driven move than a market-driven one. The Oracle of Omaha has always gravitated towards owning asset-rich businesses such as banks, railroads, and insurance companies. GE is getting rid of those types of businesses to concentrate on creating value organically through increased revenue and earnings.

Editor’s Note: Bank on Making America Great Again with our Top 10 Stocks for 2017 (and beyond). Every one of them rock-solid and made in America, these companies will take your portfolio to new heights—paying double- or triple-digit gains over the next 3-5 years … Read more about them here.