One Of The World’s Best Businesses Is On Sale

If you read yesterday’s issue of StreetAuthority Daily, then you know that my colleague Brad Briggs discussed why learning about Warren Buffett’s career still matters for investors today.

In short, he mentioned that despite Buffett’s $80 billion fortune, you and I have a big advantage over him.

You see, because you and I don’t have massive portfolios like Buffett, it doesn’t take much to really move the needle. It’s a nice problem for Buffett to have, frankly, but it can really work to our advantage. That’s because, if we emulate Buffett’s habit of buying fantastic companies when they are trading for reasonable prices, we should be able to outperform him over the long run.

#-ad_banner-#If you missed out on that issue, be sure and check it out here.

He also mentioned that I would be sharing the latest pick from my premium newsletter, Top Stock Advisor. And that’s exactly what I’m going to do right now — because it’s a world-class brand that’s selling for a no-brainer price right now…

A Glimpse At My Latest Pick
Most of you are certainly familiar with the specialty coffee retailer Starbucks (Nasdaq: SBUX). After all, it’s the go-to source for millions of consumers worldwide. It even introduced new, now easily-recognizable terms to the public… teaching customers that a “venti” is a large drink, for example.

Starbucks offers one the greatest growth stories around. When it opened its first store in Seattle back in 1971, it simply wanted to serve the world’s finest fresh-roasted coffee. But Howard Shultz — former CEO — had a different idea. A trip to Italy altered the course for both Starbucks and Shultz…

The coffee bars and coffee experience in Italy were unlike anything Shultz had ever witnessed. They were a place for conversation and a sense of community. And he wanted to bring this experience to America. So in 1987, Shultz, along with a few local investors, purchased Starbucks. The company blossomed from one shop in Pike Place Market in Seattle to nearly 27,000 coffee houses worldwide. And it’s nowhere close to being done…

For fiscal 2017, Starbucks plans to open 2,200 new stores worldwide. Plus, Starbucks has proven that it’s capable of quickly opening and turning these new stores into profit-generating machines. Its return on invested capital is a remarkable 30%, while its average cost of capital is 9.2%. In other words, Starbucks is making about $1.21 for every dollar it puts into its business. 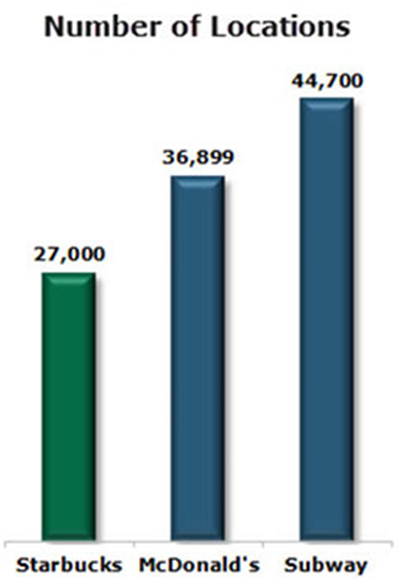 In major metropolitan areas it seems as if there’s a Starbucks on every corner. Many would assume that at some point the opportunity cost of opening a new location in the United States would diminish, but in fact, it’s quite the opposite. For example, in Seattle, where there is quite literally a Starbucks on almost every corner, sales per capita are more than double than in Los Angeles. And overall, the number of Starbucks locations still trail peers like McDonalds and Subway.

Starbucks revenue continues to grow. In its most recent quarter, the three months ended July 2, sales grew 8.1% to over $5.6 billion, compared with the same period a year ago, and comparable store sales grew 4%. Gross margins sit around 60%, meaning that for every $4 latte the company sells, it rakes in a gross profit of $2.40.

Many investors believe that Starbucks’ major growth days are behind it… but they were also saying the same thing about McDonald’s 20 years ago. Besides, the numbers indicate that the company still has plenty of room to grow in its international segment.

A Common Language
It doesn’t matter where in the world you go, you can always find common ground over a cup of Joe. And it’s this simple notion that forms the basis of Starbucks’ business: create a place for consumers to meet and enjoy a cup of coffee or tea.

In the United States, many of us find ourselves rushing through the drive-through at our local Starbucks to grab a quick Venti Americano before we head to work. But in many other parts of the world, where life doesn’t move at such a fast pace, consumers will sit back and enjoy a conversation and a warm drink.

This is where the real growth potential for Starbucks lies — in the international markets, namely China, Brazil, India and Japan.

In 2007, Starbucks had 4,327 locations outside of the United States. Today, the company has increased its international locations to 11,913. This still pales in comparison to McDonald’s 22,700 international stores, but that just goes to show how much room for growth there still is in the international space.

Operating margins for its United States locations are a resounding 24%, but its international locations are currently closer to 15%. I believe that Starbucks’ business model can be leveraged in its international stores to reflect margins closer to what they are in the United States. It will just take time (the company is already pretty close in its China/Asia Pacific region, but still needs to improve its emerging markets segment). Starbucks has considerable clout when it comes to bargaining with suppliers and has the brand power to continue etching out market share internationally.

Sales growth for fiscal 2017 (Starbucks fiscal year ended September 30) is projected to grow only 6% this year over 2016. The company has enjoyed double-digit revenue growth over the last five years, and this mid-single digit growth is likely a reason this stock has fallen out of favor with investors… 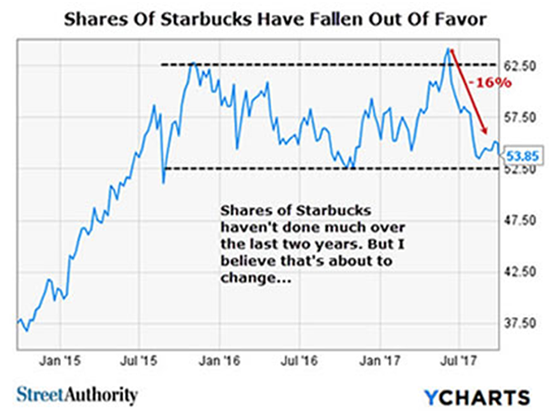 But I think the company will once again find its footing and continue growing sales at, or very near double-digit territory once again. The company is a money-generating machine, and that won’t stop simply because sales grew “only” 6%. Starbucks produces solid free cash flow — more than $3.1 billion in fiscal 2016, up from $2.4 billion the year before. Plus, the company has a history of rewarding shareholders through dividends and share buybacks. Its five-year dividend growth rate is 24%, and the company purchased over $1.6 billion worth of shares over the last 12 months.

Right now, we can pick up one of the world’s greatest businesses at a fair price. Looking at its P/E multiple, the coffee retailer is trading at a 9% discount compared with its five-year average, which is nearly one standard deviation below the norm. Every time the company has deviated this much from its historical average the stock rallied in the ensuing years.

Take a look (I’ve circled each time Starbucks’ P/E was one standard deviation below the norm): 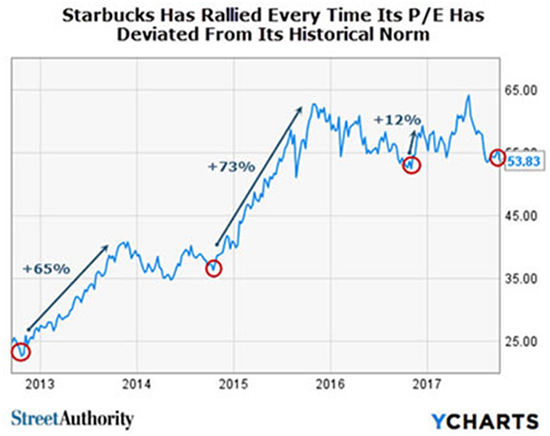 The bottom line is that we have the opportunity to pick up a solid stock that seems to have fallen off the radar of most investors… and it happens to be one of the world’s greatest businesses.

Starbucks has been a consistent winner for us at StreetAuthority, and I anticipate that’ll be the case again. That’s why I recently added shares to my portfolio in Top Stock Advisor. I suggest you consider doing the same.

While you’re at it, I’d like to also invite you to learn more about my premium newsletter. By following a clear directive of looking for the world’s greatest businesses and buying them for a fair price, we’re crushing it in 2017 so far. We’re talking about gains as high as 50.2% in our 2017 picks alone — and many of our long-term picks are well into triple-digit territory. To see how we do it, go here.