3 Chipmakers Powering The Internet Of Things

There’s lots of talk about how companies are exploiting the so-called Internet of Things (IoT). Truth be told, they’ve barely scratched the surface.

That’s because the technology of connecting billions of sensor-laden consumer products, as well as industrial machines and equipment, to the internet remain in the very early stages of development.

But the technology is growing more massive every year. According to McKinsey Global Institute, the IoT will generate up to $11 trillion in economic benefit by 2025. Of course, those numbers include profits to device-makers, efficiencies, new businesses, and savings to consumers from more efficient products.

But it’s still a trend investors ignore at their own financial peril.

#-ad_banner-#Further adding credence to the McKinsey data, another forecast from market research company IHS Markit makes a bolder prediction. IHS Markit claims that more than 75 billion smart devices will be in use by 2025. That’s a 400% increase over the roughly 15 billion devices in use today.

Now, to put this number in perspective, chip manufacturers must build microchips at a rate that is six times greater than has ever been produced since microchips were first developed in 1958 by Texas Instruments (Nasdaq: TXN).

And it’s a trend smart investors must get behind if they hope to get ahead of the pack.

Below are three chip stocks well positioned to take advantage of the huge trend behind the massive Internet of Things. Buying these stocks today will produce huge profits over the next decade.

Lam Research
Lam Research (Nasdaq: LRCX) is a well-run, California-based company with a market cap of more than $30 billion. As you can see from the chart below, Lam Research has performed brilliantly — almost doubling in the last year alone. 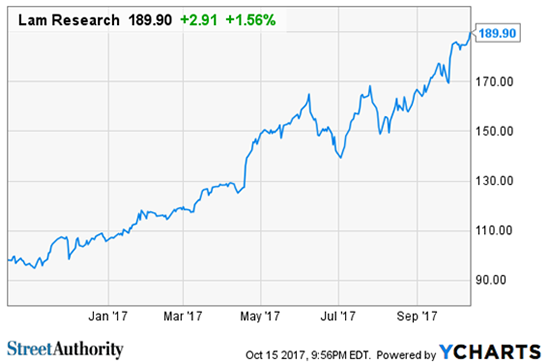 But this stock’s surge isn’t over– not by a long shot.

You see, despite the rise, the stock is still relatively cheap, trading at a forward price to earnings ratio (P/E) of 13.8. That’s several points less than Lam’s estimated growth rate of about 25%. And in the words of famed investor Peter Lynch, “If the P/E ratio is less than the growth rate, you may have found yourself a bargain.”

Need more proof that the stock is relatively cheap? LRCX is currently trading with an EV/EBITDA of just 11.1. For the uninitiated, EV/EBITDA gives investors a theoretical takeover value, which is similar to how an investment banker values companies. At this level, LRCX is trading at a 40% discount to the median S&P 500 EV/EBITDA ratio of 18.7.

This makes Lam Research a bargain…

The company is sitting on more than $6 billion in cash and $2.3 billion in long-term debt. Keep in mind, the company is generating $2 billion annually in cash from operations, too.
Better yet, thanks the considerable tailwinds blowing in from the IoT, the company will see even bigger profits in years to come. It’s a must-have stock.

ON Semiconductors
ON Semiconductor Corporation (Nasdaq: ON) is a Phoenix-based mid-cap chipmaker. The company’s market cap is just over $8 billion. Like LRCX, ON has performed well, rising about 70% over the past 12 months. 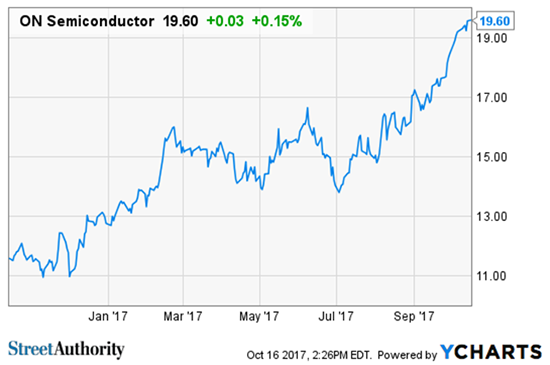 ON boasts a forward P/E of just 11.9, which compares favorably to the S&P 500’s average forward P/E of 20.6. Currently, the stock trades at just nine times cash flow, making this stock an exceptional bargain.

The company’s earnings per share rose to $1.39 in 2016. This represents a year-over-year growth rate of nearly 76% over 2015 results. Better yet, the stock’s long-term expected earnings per share growth rate tops out at nearly 20% annually for the next decade. This makes this stock a required asset for any growth investor’s portfolio.

Like the previous two stocks, AMAT has experienced a huge rise in its stock price, doubling in the last year alone. This growth looks set to continue as the IoT megatrend gets under full steam. 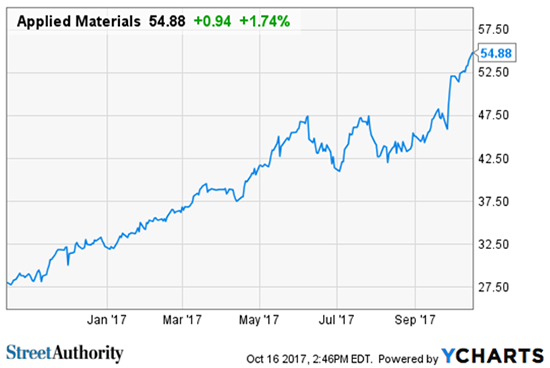 AMAT’s forward P/E sits at a very favorable 15, and its expected growth rate is even higher. Analysts currently expect AMAT to grow by nearly 30% annually for the next five years. If this proves true, the stock will grow to more than $200 per share by 2022 assuming no change to its current P/E ratio of 19.6.

The company carries $3.1 billion in long-term debt, but its net-debt is effectively zero with $3.7 billion in cash on the books currently. Additionally, the company generated about $3.3 billion in free cash flow over the past 12 months.

Applied Materials remains substantially undervalued at its current price point. Given the nature of the trend ahead of the company, this stock is going higher.

The Takeaway
There’s sufficient evidence available to suggest that IHS’ estimates for 75 billion smart devices may actually be too conservative. But even if the number is close to reality, that number represents nearly 11 smart devices for every human being on earth. It’s a trend that won’t be slowed, no matter the state of the economy over the next decade.

This trend is virtually unstoppable, and the profits will prove to be as well…

Risks To Consider: While the stocks illustrated in this article remain solidly inside a megatrend, they are cyclical in nature. As such, they carry a high beta, which means they are more volatile than non-cyclical stocks. The stocks could experience wild price swings that increase the odds of panic selling by investors.

Action To Take: Investors should buy these stocks on weakness. Mitigate your risk by limiting your purchase of each stock to a maximum of 2% of your portfolio. The trend supporting these stocks is long-term, so the holding period is greater than five years. That makes this recommendation prudent for investors with a longer time horizon.

Editor’s Note: You might think Tesla would be Elon’s cash cow… but it’s not. You’ll be surprised to find he’s got his eyes on an even more lucrative endeavor. One that’s potentially bigger than GM, Toyota, and even Apple… combined. Click here to grab a piece this trillion-dollar golden goose for yourself.