These 3 Things DESTROY An Investor’s Performance

There’s no doubt about it, the market is downright bullish. In fact, the S&P 500 hasn’t experienced a decline of at least 3% since Nov. 7, 2016. As I’m writing this, that amounts to an incredible 240 trading days without so much as a pause for this bull market. 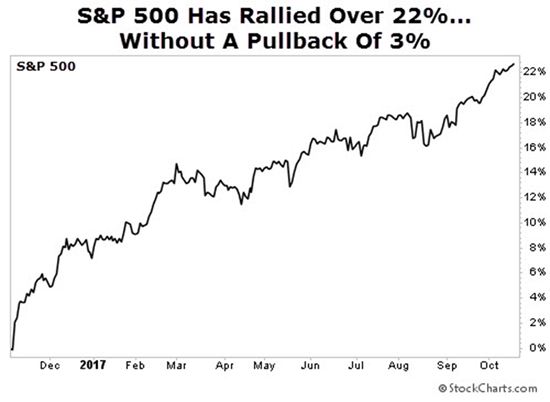 To put this into perspective, there’s only been five other times where the market even went 100-plus days without a pullback of at least 3%. No. 3 on the list is 162 days.

Does this mean we’re due for a market pullback? Sure. Maybe. But like I’ve said before, bull markets don’t die of old age. This is simply one of those fun little obscure stats; something similar to what you might hear an ESPN anchor pull out of their hat when watching a sporting event.

#-ad_banner-#But still, the simple fact is that we’ve gone nearly an entire year without experiencing a pullback of at least 3%… and that’s a bit alarming. After all, it is “normal” to experience a correction (defined as a pullback of 10%) a couple of times per year.

It’s times like these (when all the stats have been repeatedly telling us that a bear market is looming) that make me realize that, without the Maximum Profit system at our disposal, my subscribers and I would likely fall victim to the typical emotional investing behavior that plagues so many investors.

Without my system, we would have likely listened to the crowd and gone to cash, only to see the stock market march higher. Then feeling like we were “missing out,” we might have hopped back into the market (likely near the very top).

Investing by the seat of your pants like this, with no plan or rules set in place (no investing discipline), is what the majority of investors do.

And I’m not the only one who thinks that. According to Dalbar’s annual Quanititative Analysis of Investor Behavior report (its latest installment was released last month), over the past 30 years, the average individual investor has trailed the S&P 500 by 6.18 percentage points. Individual investors in equity funds have returned 3.98% versus the S&P 500’s 10.16% return.

The biggest reason for the lagging performance isn’t fees or taxes, either… It’s because of psychological factors. The real costs for individual investors are the emotional mistakes we make time and time again. Here are a few of the most common behaviors that plague investors:

Loss Aversion — The fear of loss leads to selling at the worst possible time; panic selling.

Herding — Following what everyone else is doing. This leads to “buy high/sell low.”

Mental Accounting — Separating the real performance of investments in your head to justify success and failure.

Most of these irrational behaviors can be fixed by simply implementing investment rules. But you must also have the discipline to stick to those rules, which can be difficult at times. You can bet that I’ve wanted to hold onto a position even though the Maximum Profit system tells me to sell. But I have these rules in place so I don’t make those emotional mistakes.

The market does NOT care how much you or I like a particular stock.

Here’s a chart of what the psychological cycle for most investors looks like: 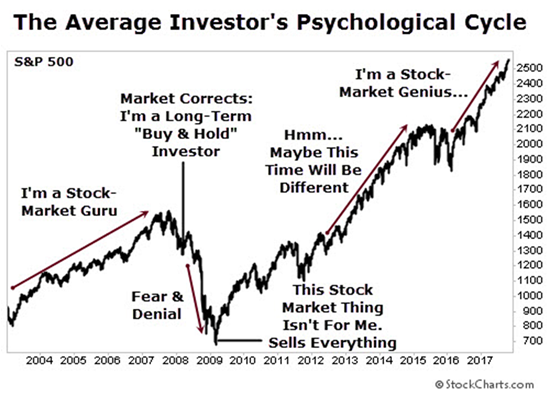 In the end, we are all human, which means we’re driven by emotion. Despite our best intentions, it’s nearly impossible to avoid altogether the emotions that come with investing, but that’s why I’m a proponent of following a system- or rule-based investing approach (and also why all great investors have strict investment disciplines that they follow to reduce the impact of human error).

With a system in place, you don’t have to worry about when the next market crash is going to come, because you have a plan in place for when it does. In the meantime, we can sit back and simply enjoy participating in this incredible bull market and the new highs and fun statistics that come along with it.

If you’re tired of investing by the seat of your pants, then consider giving the Maximum Profit system a risk-free trial. By following two of the most rigorously tested and proven indicators around (one technical, one fundamental), we’ve been hitting home runs for the past three years (181%… 90% with Electronic Arts… 72% with Alcoa… 135% with Westmoreland Coal… 242% with Bitauto Holdings, and countless others.)

More important than that, we’ve also minimized the few losses we’ve have in ways you wouldn’t believe. If you’d like to learn more about the Maximum Profit system and how you can put it to work for your portfolio, go here.