After doubling more than 19 times in the last five years, it would be easy to buy into the mainstream narrative that this global leader is overdue for a correction.

But that would be a mistake.

Not only is it the most innovative company in the S&P 500 with a proven history of disrupting multiple industries, it is successfully expanding into high-growth international markets and has major upward momentum.

#-ad_banner-#Let’s take a closer look at why Netflix (Nasdaq: NFLX) could be the number-one stock of 2018.

Netflix Is The Most Innovative Company In The S&P 500
Netflix has completely disrupted three separate industries in the last 15 years.

Netflix’s radical idea to send movies through the mail would eventually lead to industry giant Blockbuster filing for bankruptcy. When it became apparent streaming was the future of content distribution, the company was one of the first to market with its streaming service in 2007.

Its streaming service has delivered a crushing blow to the traditional cable industry, giving birth to the term “cord cutter” after tens of millions of cable customers dropped their $150-per-month subscriptions in favor of streaming plans.

Netflix is now applying its disruptive expertise to Hollywood — and the early results are promising.

Netflix’s Move Into Production Has Already Been A Game-Changer In Hollywood
Netflix invested $1 billion into developing original programming last year. For 2017, it’s on pace to invest an eye-popping $6 billion into original content. The plan is to invest another $7 to $8 billion in 2018.

The move into content has been another home run for Netflix. The success of this original content was just on display, as the streaming giant scored 92 Emmy nominations, second only to HBO’s 110.

Netflix wasn’t even developing original content five years ago, but today it’s dominating the competition. Popular originals like Master of None and Unbreakable Kimmy Schmidt landed nominations for best comedy. The Crown, House of Cards, and Stranger Things were nominated for best drama.

International Growth Is Booming
Netflix will likely continue gaining new customers in the United States. But international markets present a much bigger opportunity.

In January 2016, at the Consumer Electronics Show in Las Vegas, Netflix CEO Reed Hastings impressed the crowd when he announced the company had beaten its goal and added 130 new countries to its global reach. That move tripled the number of countries Netflix operated in to 200 and made the service available in just about every major country in the world.

Since then, it has continued to expand its international operations. For example, in September Netflix announced it had renewed and extended its contract with Orange, one of France’s largest telecoms. Expanding on the terms of the original deal, Netflix will now be available in another 29 countries across Europe, the Middle East, and Africa where Orange operates.

This big push into international markets is set to pay off for years. International users are expected to jump to 100 million by 2020, up from 55 million today.

The company’s recent third-quarter results were impressive. Revenue was up 30% from the same period last year to $2.98 billion, a new all-time high. Take a look below. 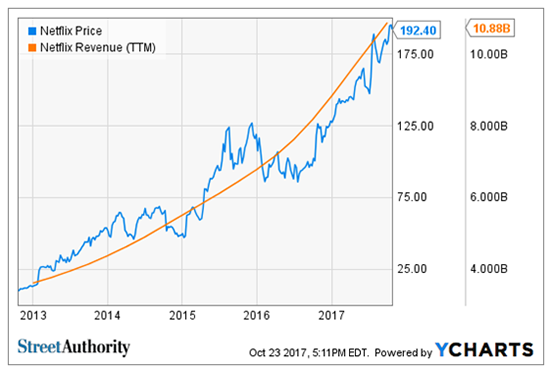 Further out, total users are expected to increase to 160 million by 2020. That’s 45% potential user growth in less than three years.

Netflix Looks Pricey But Has Incredible Upward Momentum
Netflix is no value stock. Shares are expensive and investors are pricing in a lot of future growth.

Netflix’s P/E ratio of 154 is a sharp premium to the S&P 500’s 20. However, when factoring in projected earnings growth, that premium isn’t as steep as it may seem.

Netflix’s PEG ratio of 5.75, which is price-to-earnings divided by projected earnings, is more reasonable against the S&P 500’s 2.2.

Netflix Has Doubled 19 Times In The Last Five Years
Netflix is one of the hottest momentum stocks in the S&P 500. In the last five years, shares have risen a mind blowing 1,900% — the equivalent of doubling 19 times. Take a look below. 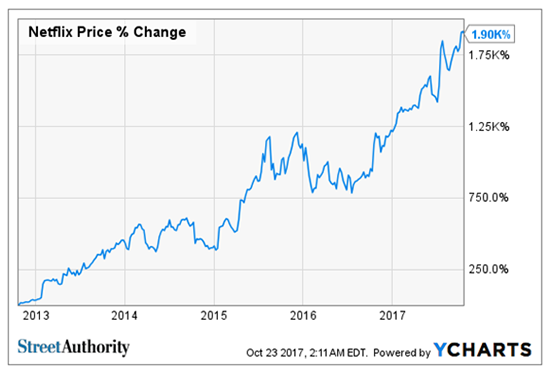 Risks To Consider: Investors have sky-high expectations for NFLX. It needs to deliver excellent earnings results and forecasts or shares could fall anywhere from 10% to 20%.

Action To Take: Netflix is pricey, but it’s the most innovative company in the S&P 500. Buy shares now below the 52-week high and look for another market-beating gain in 2018.

Editor’s Note: Stocks like Tesla and Netflix have been some of the most obvious winners of the last decade, churning out predictable quadruple-digit gains even while investors have been ignoring them. So which major stocks are next? Click here to read our FREE report about the market’s next big winners…