3 Reasons GrubHub’s Growth Story Is Far From Over

No matter how you look at it, food service is changing in the United States. In fact, research indicates that Americans now eat 50% of their meals out of the home. That’s up from just 2% in 1920. This shouldn’t be surprising, given our cultural penchant for instant gratification.

Whether this trend is good or bad, one thing is abundantly clear: The days of a family gathering around the dinner table eating a meal from scratch — à la The Waltons — has gone the way of the 1970s television show.

However, eating out can be very expensive. A twice-weekly trip to a fast casual restaurant for a family of four can cost the same as a week’s worth of groceries.

To some extent, the high cost of eating out helps explain the explosive growth of meal-kit services like Blue Apron (NYSE: APRN), HelloFresh, and Plated that deliver uncooked ingredients to be prepared in the home.

#-ad_banner-#But even the convenience of meal kits isn’t particularly appealing to families stretched for time. Late hours at work combined with an endless stream of extracurricular activities for kids has left many parents deprived of the time to cook dinner — even meal kits.

This is why food delivery is such a high-growth market. Let’s look at some numbers.

According to research firm Statista, the U.S. online food-delivery market (excluding deliveries of unprepared food) is currently worth more than $18 billion. Economists expect prepared food delivery to grow at nearly 30% for the next decade. This includes both corporate food delivery as well as personal food delivery.

For investors looking to take advantage of this trend, one need look no further than GrubHub (NYSE: GRUB).

1. GrubHub Dominates Its Industry
At the end of 2010, GrubHub had a presence in just 13 cities. Today, the company has relationships with more than 75,000 restaurants in 1,200 U.S. cities and London. This has propelled GrubHub’s daily order total to more than 300,000.

Historically, most of the company’s growth has been organic, but that has changed in the past couple of years. You see, GrubHub went on an acquisition spree, buying up smaller competitors such as Boston-based Foodler and others.

But its recent acquisitions portend bigger profits for the company. In August, GrubHub announced the purchase the Eat24 platform from Yelp, increasing its stable of restaurants by some 40,000.

Better yet, GrubHub now owns 52% of the food delivery market (excluding pizza chains). It’s also important to understand that the Eat24 deal involves a partnership between GrubHub and Yelp that makes GrubHub the preferred online ordering platform for restaurants on Yelp’s sites.

And this is a big deal. The Yelp app is on some 28 million devices, resulting in more than 74 million unique visitors on its mobile website in the last quarter. Yelp has become the go-to destination for restaurant information and reviews.

In addition to the Yelp deal, the company also entered an agreement with Groupon (Nasdaq: GRPN). The deal makes GrubHub the exclusive provider of food delivery on the Groupon platform as well, allowing coupons to be used towards GrubHub deliveries. 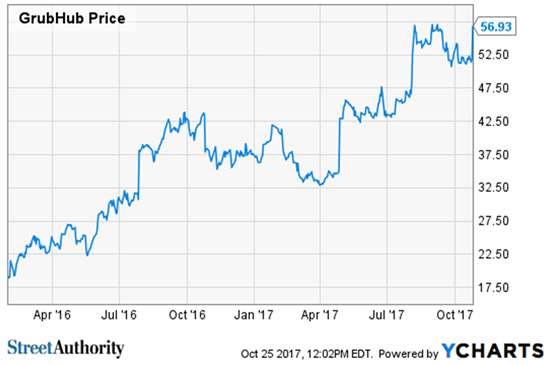 Revenue grew more than 32% in the quarter, rising to $163.1 million. Earnings were up as well, coming in at 28 cents per share to beat analyst expectations of 24 cents per share. The company also guided higher on its current quarter, indicating that it expects quarterly revenues to reach up to $205 million versus expectations of $182 million.

Active GrubHub diners rose 28% year-over-year to 9.81 million. The number of daily GrubHub users rose 14%, to 304,500. As an added bonus, these results came in what is historically the company’s slowest quarter.

3. The Elephant In The Room
Some analysts are less optimistic about GrubHub’s future due to the presence of company-killer Amazon (Nasdaq: AMZN) in the food delivery business. Many believe Amazon will swamp all food delivery services much like they’ve done in other industries, but the issue is likely overblown. Here’s why…

GrubHub doesn’t really consider itself a food delivery service. Instead, it markets itself as an online marketplace for restaurant food since, in most cases, the restaurants handle the physical delivery of the food.

And it’s in this space that GrubHub dominates the industry, leaving Amazon and other competitors in a materially different niche. There is nothing visible on the horizon that could derail GrubHub’s continued growth in the next five years.

Risk To Consider: GrubHub is a high-beta stock in a relatively new industry. Although GRUB is the market leader, the industry is in its infancy. There is little to no evidence that the trend upon which GrubHub operates isn’t a cyclical change that has no staying power. This seems unlikely, though.

Action To Take: Buy shares of GrubHub on any weakness that takes shares below the $55 level. Mitigate risk by employing no more than 2 % of your portfolio to GRUB. Use a 25% trailing stop loss to protect your capital. Expect to hold the shares for three to five years.

Editor’s Note: StreetAuthority’s Genia Turanova featured GrubHub in a 2016 issue of her premium newsletter, Game-Changing Stocks. This well-timed recommendation allowed her subscribers to close out a 41.2% gain on the stock in just nine months. Now she has her eye on a new opportunity, one that could be even more rewarding…

Based on our research, Genia and her team believe that Elon Musk, the eccentric brain behind Tesla and PayPal, will soon ditch his auto empire. That’s because he’s set his sights on an even more lucrative business. And if you jump in at the ground level of this opportunity you can ride it upward to sky-high profits. Grab a piece of this $1.3 trillion industry in the making today.