Before I gave up on Chicago winters, I managed a hugely popular and successful service called Whisper Trader. Whisper was focused solely on predicting whether a company would beat or miss earnings estimates, and the results were quite remarkable.

When I left that service (and the windy city), I took the existing criteria and added several more factors to create my own earnings prediction algorithm… one that was even more accurate than the original.

With earnings season once again ramping up, my algorithm is busy sifting through the myriad of coming earnings reports for the most probable beats and misses.

There are three main factors that influence my algorithm and ultimate decision for an options trade: Analyst changes, technical formations and option skew. All three go into my decision making process, along with a few other items that must pass my tests.

#-ad_banner-#Today, I’m going to share a little of my “secret sauce” with all of you.

Cheesecake Factory (Nasdaq: CAKE) came up on my radar Friday and has me quite excited about its earnings potential… or, more specifically, the lack thereof.

Cheesecake Factory is a fast casual chain born in 1978. Many of you probably know the company, or maybe you’ve even been to one of its 200 namesake restaurants located in the United States and Puerto Rico (it’s the one with the overwhelmingly large menu). The company also runs 13 restaurants under the Grand Lux Cafe brand.

Once a leader in the space, the chain is now experiencing a reversal in growth. Earnings are due out next week, and my models are calling for a “not so sweet” report.

CAKE: Analysts Not Feeling The Love
Perhaps the most important factor in determining a company’s earnings outcome is how the analysts that follow the stock behave. When the majority of analysts lower their estimates ahead of a report, they’re often looking for increasingly weaker numbers (as we see in the agreement table below).

As you can see, CAKE has received significantly more downgrades than upgrades this quarter, with one analyst lowering his estimate within the past week. Estimates have been tumbling throughout the quarter, showing an increasingly bearish outlook as we approach CAKE’s earnings report, scheduled for Nov. 1.

This brings me to my next factors — timeliness and accuracy.

Analyst estimates often go without qualification. All the estimates are simply averaged together to create what’s called the consensus EPS estimate. It’s an effective way to incorporate all of the data into one easy number, but it leaves a lot more to the story.

What if one analyst has been more accurate than the others? Or if an analyst drops her estimate by a large amount just before earnings? Maybe she’s discovered some profound piece of data that could impact the company… and maybe we should then pay more attention to her estimate, rather than the average!

Zacks simplifies this process by releasing what they call ESP (earnings surprise prediction), which is used to determine the stocks that have the best chance to surprise with their next earnings announcement. In CAKE’s case, that number is -3.22%. Zacks is predicting earnings will miss by $0.02 per share.

My algorithm goes a bit deeper and gives more weight to analysts who have not only been correct in the past, but are also proactive in their updates.

Looking at the price chart below, you can see CAKE has been dropping since the end of Q1 2017. 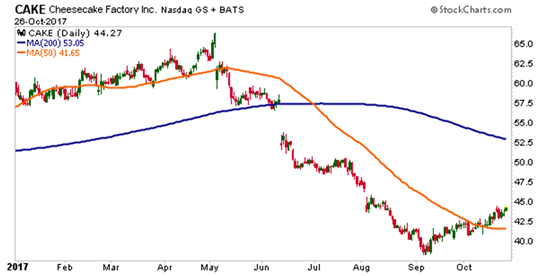 The analyst from Goldman Sachs correctly called the drop and continued to update prices in a methodical, proactive way as shares fell further. Even when she thought the stock might not drop in the near term, she still maintained her “sell” rating and simply adjusted her target price so that it was more in line with where the stock was trading.

The analyst from The Maxim Group did the opposite. As CAKE started to drop, he upgraded his recommendation to a “buy” and has stubbornly kept his “buy” rating while shares have tanked. Although, judging by his falling price target, you can tell he’s finally starting to lose confidence.

Of these two, my system gives more credence to the earnings predictions made by the Goldman analyst than those made by the Maxim analyst, and those weightings go into my forecast. With 21 analysts covering CAKE, only five recommend it as a “buy.”

Using my algorithm, I forecast CAKE will miss EPS estimates by $0.03 and/or offer a weak outlook — both of which would send shares lower.

No Reason For Investors To Take Pity On Overvalued Stock
The runaway market rally has pulled CAKE off its September lows and back above its 50-day moving average (MA) around $41.70. However, the stock’s 200-day MA (around $53.70) is still way above both current prices and the shorter-term average, which tells me this stock is still in a bearish trend. 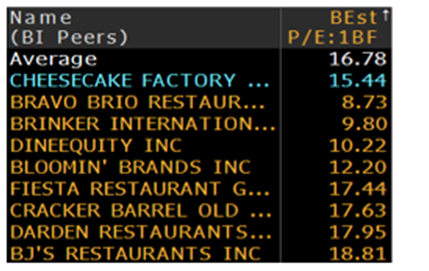 Even though CAKE has been downgrading its outlook and is seeing negative same-store sales growth, it still trades at a very competitive valuation compared to its peers. The company’s price-to-earnings (P/E) ratio is much higher than restaurants companies like Brinker International (NYSE: EAT) and Bloomin’ Brands (NASDAQ: BLMN), which owns Outback Steakhouse.

These factors are important for the “reaction” portion of the equation. If CAKE were extremely cheap compared to its peers, investors might take pity on a poor report by justifying the stock as a value play.

But that’s simply not the case with Cheesecake Factory.

We all know that the restaurant industry is hurting, and things may get worse as Americans start signing up for healthcare starting Nov. 1. Consumer spending is already being partially blamed for the fast-casual dining drought, but a 40% to 57% increase in many healthcare plans could further tighten spending and sales in the industry.

I’m Predicting A Selloff
Based on what I am seeing from analysts, industry trends and CAKE’s valuations, it seems probable that the company will miss earnings and move lower.

And while it’s true anything can happen — especially in this crazy market — all of the signs are pointing lower. The odds are in our favor.

Based on my models, I’m targeting an 8% move downward in CAKE shares to $40.90. But rather than short the stock, my Profit Amplifier readers and I will buy put options to turn an 8% downward move into a 30% gain.

If you’re not familiar with how options work, then that’s OK. All you need to know for now is that I like to think of this as like “raiding” the stock market — taking advantage of small price moves to take home more than our fair share of gains from a particular stock.

In fact, we make targeted trades like this all the time in my premium newsletter service, Profit Amplifier. We’re only going after the small, easy-to-capture, stock moves. We’re not swinging for the fences. Or taking big risks.