A No-Brainer Trade For The Digital Payments Boom

The exchanging of real dollars is becoming less and less common, as are the merits of doing so. Our digital, credit-fueled society has little room for the slow, paper currency of old.

Even the tried and true transactions of the cash economy (i.e. small businesses and person-to-person exchanges for goods) are becoming better served by digital transactions, which are quicker and safer (both in personal safety and fraud).

What was a “niche” industry not too long ago has already become a $600 billion global powerhouse. Experts predict that number to balloon to $3 trillion by 2023 — and many estimates are likely conservative as the “old guard” is hesitant to believe paper money will go the way of the Dodo.

With only a handful of U.S. companies already established and trusted in the peer-pay space, I believe only a select few will see strong earnings growth in the coming years, as digital payments become the mainstay of global and local commerce.

#-ad_banner-#One company in particular is already the best in breed, with a trusted brand among Gen-X’ers and even Baby Boomers globally. A recent acquisition has given it major traction with the digital transaction-heavy millennial generation — a key but underestimated advantage that will propel shares to new highs in the coming year.

And just as Facebook (Nasdaq: FB) has woven into the fabric of society as a whole, this company is set to do the same… and not many see the real potential.

In a rare moment for my Profit Amplifier premium newsletter subscribers, I recently recommended a “long-game” trade for exposure to this fast-growing industry.

Cash No Longer King Among Skyrocketing Transactions
As a kid, I remember going to buy a car with my father and a pocket full of cash to entice the dealer to give us the best deal. We plunked down $2,800 in crisp $100 bills on the desk and got $400 off the asking price!

These days, car dealers aren’t enticed by lumps of cash; they usually make more money with a loan or internal financing. Besides, with the average car price upwards of $30k, it might be a little awkward dumping that kind of money on the desk.

The same is true for busy merchants who’d rather you swipe your card or use a digital payment to save them the transaction time, costs of running to the bank and increased risk of robbery (cash isn’t easily insurable).

But more than safety, convenience, and profit is the fact that the most recent economic expansion has been fueled by credit, which in turn fuels consumer borrowing and spending — mostly on credit cards and through other digital means.

Total consumer credit has ballooned from less than $2.6 trillion in 2010 to nearly $3.8 trillion in Q3 of 2017. That’s a lot more money sloshing around the payments system. 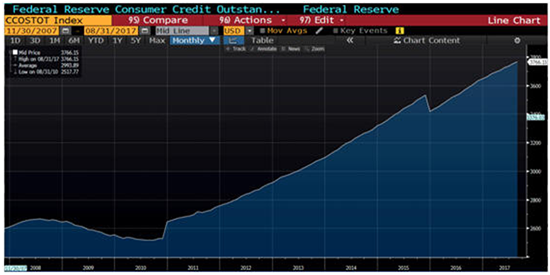 On top of that, the consumer savings rate is at a 10-year low, suggesting confidence in the economy and a willingness to spend.

Digital payments not only allow consumers to pay with cash already in liquid accounts, but through credit cards as well. Nearly $4 trillion in credit is one hell of a pool for digital payment companies to tap in to.

So if a consumer finds a car or other item on Craigslist, Facebook Marketplace or any of the new local commerce apps, they can choose to use Venmo or PayPal (both services offered by today’s target) to send the seller his money, using whatever account or card they choose. Everyone gets their money and the transaction is even protected in some cases.

Deny what you want, but digital currency is the wave of the future, with paper and coin becoming a small portion of our commerce (mainly for shady dealings and some other exceptions). Society will have to deal with electronic fraud and hacking just as they do with paper — but the money and time saved with electronic currencies will more than justify the negatives.

This isn’t just a consumer shift, either… Banks have already begun pushing us into digital cash as they shutter branches, reduce staff, and even charge us for cash deposits (yea, it’s bonkers). Parts of the Dodd-Frank bill target large cash transactions and make you the target if you’re someone who likes to deal in cash (think money-laundering, tax evasion, etc.).

Aside from the volatile cryptocurrencies of the world like bitcoin and others, consumers need a way to exchange digital cash securely, easily and cheaply.

PayPal, King Of Digital Payments
PayPal (Nasdaq: PYPL) was spun off from eBay roughly two years ago. The company is now the number-one digital payment processor, with nearly 20 years’ experience in the game. PayPal operates in more than 200 countries and in 26 currencies. It offers consumer and business solutions with its “checkout” options available on many ecommerce sites.

Even with 20 years under its belt, PayPal is a relatively new public company, with autonomy and potential that I think is being underestimated.

Its latest earnings report on October 19th was a complete blowout, beating on every metric.

But even though growth is strong and gaining momentum, analyst recommendations, with a majority “buy” rating and target 10% above current prices, appear to be tempered (but still good enough for our trade).

See, PayPal is playing it smart, keeping its outlook very moderate. This makes upside surprises and subsequent stock gains easy to come by.

Bloomberg analysts recently noted that anticipated 20% revenue growth estimates (average) are low. Not only is PayPal seeing double digit growth in new accounts, but usage for mature accounts has been greater than expected…

If you’re under 35, you’ve likely used Venmo to send and receive dollars from friends and business dealings — like splitting a check or sharing expenses for a trip. Venmo is a millennial-friendly payment system created by a couple of techies several years back and was quietly acquired by PayPal not too long ago.

Paypal and its analysts are factoring only a “modest” revenue contribution from Venmo. But I think Venmo, which is already hot among Millennials, is going to be much bigger than models can predict.

This service is growing at over 100% per year, and isn’t showing signs of a major slowdown at all. 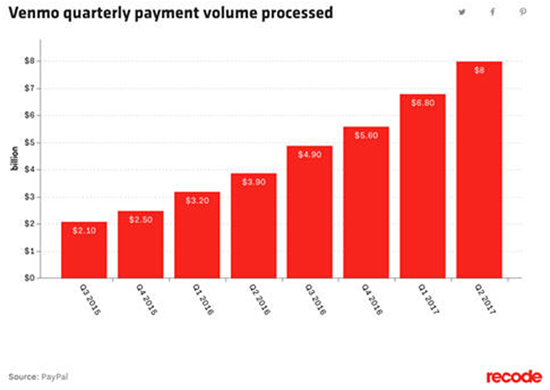 But this is more than just growing payment amounts and transactions. As Venmo becomes the gold standard for digital currency sharing, its recognition and usage will grow exponentially.

How We’re Booking A 55% Return
After PayPal’s recent earnings report, I noticed that a majority of analysts moved their price PYPL targets to $80 or above. That’s a level I see the stock easily attaining in the next six months and a big, round number that investors tend to gravitate towards.

It’s a good target for regular investors, representing about a 10% move from current prices. But my Profit Amplifier readers and I want more than our fair share of the upside in this stock. And thanks to the power of a simple options trade, we were able to position ourselves for as much as 55% upside from this small, all-but guaranteed move in the stock.

If you’d like to know how to do this yourself, simply go here.