Every Investor Should Own A Piece Of This Cash Machine

Most Americans don’t realize the world’s largest securities market is not the stock market. According to the World Bank, the global value of all publicly traded stocks is somewhere north of $70 trillion. But that’s more than one-third less than the value of the bond market – worth roughly $110 trillion. More importantly, with the explosion of debt financing, bond markets are growing much faster than global stock markets.

Now, while the bond market has been growing rapidly, there’s an underlying problem of liquidity bubbling just beneath the surface. You see, prior to the financial crisis, large banks used their balance sheets to facilitate trading in the bond markets. They did this by purchasing large blocks of debt to hold until they could find a buyer for the other side of the trade. And with the vastness of the bond market, finding a buyer was easy.

But things changed in 2007 when banks severely restricted their bond trading. This was a necessary response to the existential threats caused by the ever-deepening financial crisis. The result was an illiquid bond market.

#-ad_banner-#Fast forward a decade, and the problem still exists. Here’s why…

New Rules, New Opportunities
In 2010, Congress passed the Dodd-Frank Wall Street Reform and Consumer Protection Act (usually shortened to just Dodd-Frank). This ill-conceived law contains an amendment known as the Volcker Rule. The Volcker Rule prohibits banks from taking speculative positions on bonds or other securities — thereby preventing banks from purchasing large blocks of securities and holding them until a buyer is located.

The result has been a deleterious impact on bond liquidity, where bank holdings are down by 50%. This comes at a time of record levels of both corporate and sovereign debt issuance. The net result is reduced dealer capacity, including a loss of immediacy, or on-demand bond liquidity.

But that’s not the only problem…

But, you ask, how does a European law affect securities transactions in the United States?

Investors need to understand that today’s capital markets are increasingly global. Most U.S. banks and brokerage firms maintain a strong presence in Europe, making compliance with MiFID II mandatory. And firms without an actual presence in Europe will feel pressured to comply as well — or risk alienating customers.

So, between Dodd-Frank and MiFID II, regulators have all but guaranteed a bond market with less than optimum liquidity. And in any future financial crisis, a lack of bond liquidity would be calamitous.

This is why I’m bullish on a company that promises to mitigate the liquidity issues facing the bond market. The company is MarketAxess (Nasdaq: MKTX). 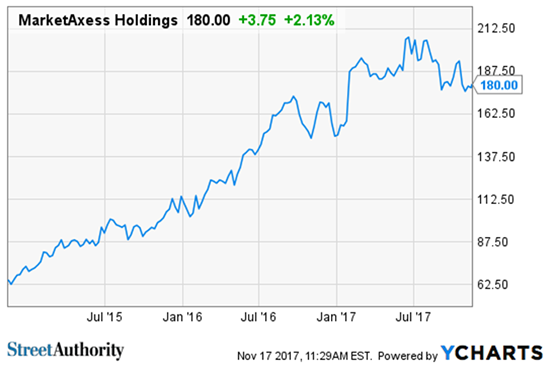 MKTX’s business model allows the company to reach more than 1,300 market players all at once. Their system allows for faster transactions while creating more liquidity — something the market desperately needs.

Just as importantly, the system effectively accomplishes the goals of MiFID II by improving transparency as well as tightening the spread between the bid/ask price of bonds.

Now, 80% of the company’s trading volume is done on its Request For Quote (RFQ) platform. RFQ uses the traditional bond trading mechanism of dealer negotiations. But that’s not the exciting part. The company owns a proprietary platform, called Open Trading.

Open Trading will make MKTX the largest player in the bond market. This platform is an “all to all” platform, meaning potential trading partners consist of the entire bond market industry, including other institutional investors, ETFs, market makers, hedge funds, and broker-dealers.

Open Trading eliminates the intermediary. For the first time, investors in the bond market can trade with other investors directly, all while allowing the parties to remain anonymous throughout the entire transaction process.

MarketAxess gets paid by taking, on average, a two basis point (bp) spread on each transaction. Now, it’s true that a 2 bps is small. But when applied to the entire bond market, MKTX’s potential earnings reach into the trillions of dollars.

In 2016, sales increased by 22% to $370 million. And this wasn’t a one-time deal. Over the past five years, revenues have grown an average of 17% annually. But at the end of the day, my favorite metric is free cash flow (FCF). This is what’s left after the company pays its operating costs and capital expenditures.

In this respect, MarketAxess is anomaly. It’s a high-growth company that had posted positive FCF every year since 2003 — including during the financial crisis. Since 2007, the company has generated $600 million in FCF on just $1.9 billion in revenue.

In short, MKTX has set itself up as the absolute best way to trade bonds under stringent regulatory rules. Every growth investor should own a piece of this cash machine.

Risks To Consider: MKTX is a growth company in a multi-trillion industry fraught with potential regulatory and interest rate dangers — including macroeconomic factors. Most of these headwinds are mitigated to some extent by the glacial pace of central bank moves in setting interest rate policy — both in the U.S. and Europe.

Action To Take: Buy shares of MKTX up to $200 per share. Mitigate risk by allocating no more than 2.5% of your portfolio to shares of MarketAxess. This stock is a long-term hold, so expect to hold shares for five years or more. Use a 25% trailing stop-loss to protect your portfolio.

Editor’s Note: Introducing our top 10 stocks for 2018… and beyond. Should you wait to buy these stocks until after Thanksgiving? You won’t believe the answer. Click here.