How I Plan To Make 25 Percent Betting Against Tesla

Elon Musk is perhaps one of the greatest marketers of our time. The optimistic showman, with his hand on the pulse of consumers’ desires, knows how to excite investors. He can dance around setbacks and keep most of us sold on his grandiose ideas that may or may not ever come to fruition.

It goes without saying that I have an immense amount of respect for the man. His work ethic and his innovations are unparalleled in modern society. But at the same time, investors can’t continue to ignore the very real problems plaguing Tesla (Nasdaq: TSLA) just because he’s the smartest guy in the room.

Tesla’s most recent earnings miss confirmed my doubts about the company’s growth. Weeks ago, while we were having a small debate about Tesla, my uncle explained to me that the technology wasn’t nearly as great as most might believe.

This was baffling; I had thought the tech was the company’s strongest point.

#-ad_banner-#But my uncle’s tech-related statements don’t need to be taken with a grain of salt. He’s a systems engineer with hundreds of patents in his name, and he knows more about technology than 99% of the population. He also has ties to some of the most powerful tech companies.

In other words, his comment shouldn’t go ignored. What’s more, he’s focused on the very protocol (ISO 26262) that keeps cars safe to drive.

As I dug deeper into my research, I also discovered that an old friend and colleague, whom I respect greatly, has been building a bearish case for Tesla over the past month, citing financial woes, unstable earnings and logistical issues. The company’s biggest problem now is the very slow ramp up of the Model 3, Tesla’s mass-market, all-electric sedan.

The car is expected to be a game-changer for the company, generating 25% gross margins in the mid-$40,000 price range. But while I believe the Model 3 ramp up will eventually be successful, I also think it’s going to take much longer than investors expect, leading to further price declines for TSLA in the near term.

The bullish analysts (some with price targets for $400 and even $500 on the stock) need Tesla to sell at least 5,000 Model 3’s per quarter to make their numbers work. The consensus is now expecting around 2,000 units into the end of the year…

This might be why top analysts at Cowen, Jefferies, Barclays, UBS, JP Morgan and Goldman Sachs have dropped their targets to around $200 or lower.

The Logic For Lower Prices
Even though Tesla has been the best at getting their product noticed, there are other companies in the game with much bigger pockets and stronger technology, set to launch their products. (Names like Toyota, Mercedes, BMW and Acura come to mind.)

Most of Tesla’s competition in the electric car space has just been sitting back, watching and learning from Tesla’s mistakes, and now they have a serious advantage. Just as production on the Model 3 is set to ramp up, we’re also seeing electric offerings from nearly every car maker… all with price tags that either match or undercut the Model 3. The Chevy Bolt is currently the No. 1 compact electric car, and it has a greater range than Tesla’s latest model.

But Tesla is also facing a larger problem: Fully electric cars simply aren’t selling all that much. In fact, in the first few months of the year, the average all-electric car sold only 660 units per month. 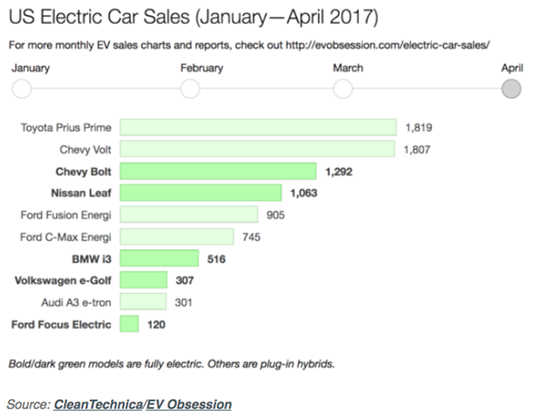 Couple that data with the production bottleneck at Tesla and a 5,000+ unit (per quarter) sales target for the Model 3 looks a little more hazy.

Elon also has most believing that his driverless and electric technology is the best out there. But other than its rechargeable lithium batteries — a business that’s also under attack from powerful Chinese companies — Tesla’s edge isn’t really what it seems.

If we are talking autonomy (driverless or computer-assisted driving), Ford (NYSE: F) is actually best poised to deliver a fully autonomous car in the next decade. In a Navigant Research study that assessed 18 different companies based on criteria like technology, vision, production strategy, product quality and reliability, Ford was awarded the No. 1 spot.

Tesla didn’t even make the top 10.

In the general electric vehicle (EV) market, there’s no doubt that Tesla has created a strong product that pushed the entire EV class forward quickly. But none of that actually guarantees a win for the company (or the sale of 500,000 Model 3’s).

In addition to the Model 3’s major competition, production for Tesla’s higher-end X and S lines is expected to slow as that space becomes saturated.

Make 25% From A 9.4% Move
As you can see, it’s a less-than-perfect picture over at Tesla. And while I believe it will be a successful company down the road, the trade I recently recommended to my Profit Amplifier readers is about investors’ lofty expectations for the near term.

I fail to see how production and sales will ramp up considerably in the winter months, and I expect investors to get even more critical when earnings are not meeting expectations.

As for the target in this trade, we will use a technical support level of $280, which is considerably higher than the $200 level that some of the world’s top analysts are targeting. 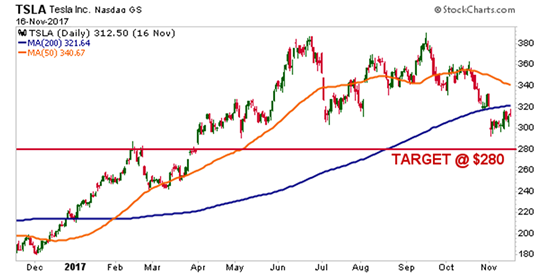 Now, rather than simply shorting the stock outright, I recently told my Profit Amplifier readers about a put option trade we can make. In this trade, we only risk a fraction of what we would by shorting the stock — and can potentially magnify our profits even more.

Specifically, we’re targeting a 9.4% drop to the $280 level. That would be enough to generate a 25% return over the next quarter with put options.

And while it wouldn’t be fair of me to give away all of the details of this trade, suffice it to say I’m fairly confident that a similar trade could deliver a quick return for interested traders. But rather than fly blind, I encourage you to check out my premium service instead. If you follow this link, you’ll see a special report on how my subscribers and I make trades like this every week — and how you can, too. And if you give Profit Amplifier a risk-free trial, you’ll get all the details for this trade as well as every other trade we make.