People strive to be more connected. It’s a common theme in history.

I think it’s especially interesting that you can even see this theme in the stock market over the past century.

Just look at the largest companies of respective eras of the past — the railroads, AT&T, IBM… all involved in one way or another with connecting people.

Today, the five largest publicly traded companies are all in the same business, more or less. Apple, Alphabet (Google’s parent company), Microsoft, Amazon and Facebook are all providing technology services that shrink the distances between people around the world.

#-ad_banner-#But if we look back 100 years, or even 50 years, we see that the promise of world-changing technologies was delivered unevenly.

An Opportunity In The Forbidden Kingdom
China is one of the countries where all of the above factors — geography, politics and other factors — prevented connectivity. As Apple, Google, Facebook and other companies achieve success around the world, they are still limited in their ability to access China even now.

Among those opportunities is a company I’ve written about before, Weibo (Nasdaq: WB), which is adapting social media to China.

(I want to take a moment to note here that I am not endorsing China’s model of regulation. I am simply identifying a potential trade that works well within that framework of those regulations.)

Weibo is a leading social media platform for Chinese-language content. The Chinese government banned social networking site Facebook in 2009, and the company is still blocked. Chinese citizens were forced to turn to homegrown alternatives that were more easily monitored and censorship-friendly. Weibo is a microblogging service that combines features of Facebook and Twitter.

Below is a screenshot of Weibo’s homepage: 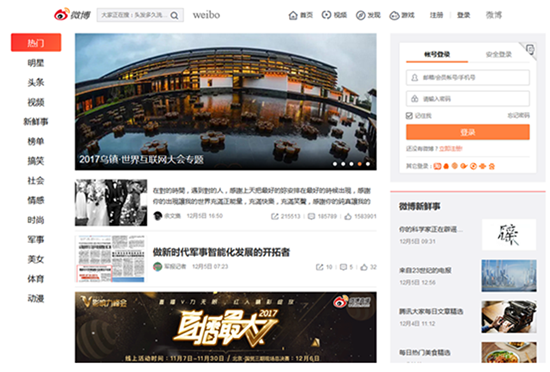 Under the current Chinese government, Facebook and Twitter will never be widely available in the country because the administration is not comfortable with the uninhibited exchange of ideas. But the ideas of staying connected and sharing one’s thoughts with complete strangers is appealing to Chinese citizens, just like it is to Americans and Western Europeans. That means Weibo is likely to be popular in China, and the company is also likely to enjoy profitability as long as it meets the needs of the government.

My point about Weibo’s profitability might be controversial, but I believe it is true. The company will do well as long as it meets the needs of the government. If the government decides to change policies, then Weibo would struggle for survival. This means that I am not sure the stock is suitable as a long-term investment. However, it does have a great deal of potential in the short term.

The company’s most recent earnings report delivered better-than-expected results. The company also continued to report steady improvements in its profit margin. Analysts responded to the report by raising their estimates for the current year along with each of the next two years.

I believe all of this makes WB attractive for a short-term income trade.

How We’re Trading WB
A few months ago, my Income Trader readers and I generated 2.9% in just 36 days from a successful trade in WB. That comes out to an annualized return of 29.8%. And recently, I identified another opportunity to nab an even bigger win — a 48% annualized gain.

We do this by selling put options.

Unfamiliar with how options work? Don’t let that scare you.

For now, all you need to know is that while most investors may take their chances with WB and simply buy the stock (while others stay away altogether), my Income Trader subscribers and I are perfectly set up to get in and out of this trade in just a few weeks.

In doing so, we’ll generate instant income once we make the trade. And we can repeat a similar trade again and again if the opportunity presents itself. What’s more, if things don’t go as planned, we’ll have the opportunity to buy WB at a substantial discount.

That’s why I call our put-selling strategy the closest thing to a win-win in the investing world. And if you’d like to learn more, I’ve got a special report that will tell you everything you need to know. Simply follow this link to check it out…