Just seven minutes every Friday. That’s all it takes…

If you can manage that, then you’ll be on your way to making about $568 a week. That’s $29,577 a year. And that can be scaled up or down, depending on your portfolio size and preference.

That’s the claim my colleague Amber Hestla is making to those who follow her proven income-trading strategy. She’s got the data to back it up, too: Since she started using the “Guaranteed Income Strategy” in 2013, she’s closed 211 trades… and made money on 191 of them.

#-ad_banner-#All you have to do is follow Amber’s instructions every Friday. Rinse and repeat. That’s it.

I know, this sounds pretty incredible. There are just some things you have to see to believe.

I’m going to show you exactly how this works in just a moment. But first, I want you to take a look at this chart… 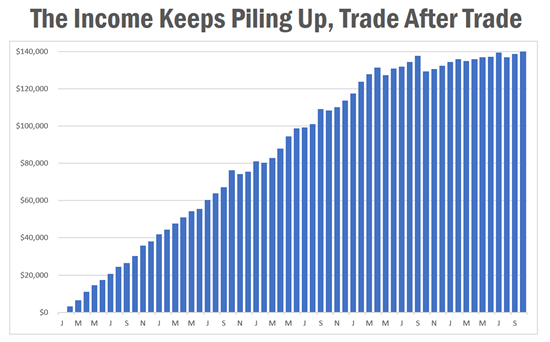 This chart shows the cumulative income that Amber’s trades have built up since. It comes to a total of $140,490 at last count.

Now, how is all of this possible?

If you’re a regular StreetAuthority Daily reader, then you know it’s by selling put options.

Now, the word “options” tends to make some people a little nervous. That’s understandable. The mainstream financial media loves to conjure up boogeyman tales of the risk involved with options.

The reality, however, is quite different.

To paraphrase Alan Ladd’s character in the classic 1953 Western movie Shane:
“An option is a tool, Marian; no better or no worse than any other tool: an axe, a shovel or anything. An option is as good or as bad as the man using it. Remember that.”

That’s exactly what options are: a tool. They’re meant for mitigating risk. They can be as risky or conservative as you want them to be. It all depends on the strategy you’re using. And Amber’s strategy is perhaps the safest there is. It’s one of the reasons why Warren Buffett has used this strategy to himself to pocket millions in easy cash from well-known stocks like Coca-Cola.

So what is it?

A put option is pretty simple.

Sticking with the Coca-Cola example, let’s say you have a friend who owns shares of Coke. And while he likes the company, he’s the nervous-type, so he’s always looking to hedge his bets.

So he offers you the chance to buy his shares of Coke if they drop, say, 10% over the next two months. What’s more, he’ll pay you $300 upfront to make sure you follow through.

Now, Coke is a pretty great company, right? I mean, you wouldn’t really mind owning Coke at a 10% discount. Plus, Coke may not fall 10% in the next two months — in fact, you’re pretty sure it won’t. Either way, you get to keep that $300.

Welcome to the world of selling put options. That’s Amber’s strategy in a nutshell.

Not Your Typical Trader
I’ve told Insider readers a little about Amber before. So if this is familiar territory for you, forgive me. But Amber’s remarkable background is worth sharing again, because it is not that of your typical Wall Street trader.

You see, Amber’s training with the markets didn’t come within the halls of our nation’s Ivy League universities. Nor did it come on the floor of the New York Stock Exchange.

It came while serving as a military intelligence operative in Iraq. When she wasn’t on duty analyzing intelligence to help soldiers avoid roadside bombs, she was reading every book about trading she could put her hands on. When she wasn’t helping to hunt down terrorists, she was using her analytical skills to earn extra money in the stock market.

After Iraq, Amber made it her mission to develop her trading strategy further. She interviewed countless experts, was mentored by some of the top minds in the industry, and began her own award-winning research. That’s how the “Guaranteed Income Plan” was born.

Soon after, our publisher was introduced to Amber and learned about her unique story — and how she was living entirely off of the income made from her options trades.

Today, Amber is a 33-year-old mother of two who lives on an 80-acre ranch in Wyoming. And that’s where she delivers her weekly recommendations to readers of her premium newsletter, Income Trader.

My question for you is this: Do you have just seven minutes to spare each Friday? If so, then you could be on your way to making about $568 week after week.

Granted, you’ll need to read Amber’s brand-new report first. Give yourself a little bit of time to look through everything and decide if this is right for you. (Amber’s team has even included a list of three questions to ask yourself before taking the plunge.)

But I guarantee it’ll be worth it. Because once you’re set up, you’ll be following along with Amber and the rest of the Income Trader crew, earning hundreds — even thousands — in extra income each month. What’s more, Amber is making a big, bold guarantee that frankly shocked me when I first heard about it…

Amber is telling each new subscriber of Income Trader that if they follow along with her trades and don’t make money at least 90% of the time… she’s going to work for you for free. That’s how confident she is in the “Guaranteed Income Plan.”

Amber never left a man behind in the military, and she’s not about to do it now. Even if you win on 89% of your trades and rake in tons of cash, it doesn’t matter. Just tell Amber, and she’ll instruct our team to extend your membership by another year at no cost. No need to show any trading statements. We’ll take your word for it.

If you’d like to learn more about the “Guaranteed Income Plan” and get started with a risk-free trial to Income Trader, simply go here.