Why You Should Ignore The Market’s Many Warning Signs

As an experienced investor, I know there are times to employ different strategies when buying and selling stocks. Two of my favorite strategies are to buy stocks at deep discounts to their intrinsic values (value investing). I also love to look for stocks at the center of some long-term mega-trend. These stocks I buy and hold for decades.

#-ad_banner-#Now, watching the crowd is not something I spend a lot of time doing. But when certain economic metrics get to extreme levels, it becomes critical to monitor conditions that might indicate retail investors are in full herd mentality.

To this point, several metrics are starting to show extreme, or near extreme, levels of greed. This indicates that retail investor sentiment is heating up — potentially indicating that a market correction could be close.

So what are these metrics?

One is a market momentum chart that measures the market against its 50-day and 200-day simple moving averages (SMAs). 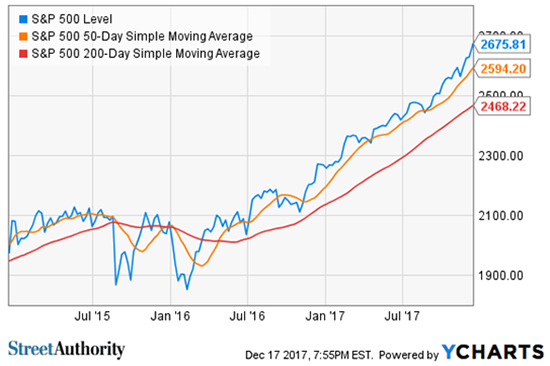 Currently, the S&P 500 Index is 7.75% above its 200-day SMA. This represents a two-year high above its average, and is indicative of a very high level of greed in the market.

But it isn’t alone in sounding a warning. The 5-Day Put/Call Ratio is also showing a two-year high — indicating a growing level of retail investor greed.

In just the past week, volume in put options has lagged call volume by a whopping 44.1%. This represents a two-year low in put buying. Again, this represents growing greed in the marketplace by retail investors.

So, does this mean it’s time to bail on this market and let the retail investors take the market down? While these (and other charts) indicate investors should be cautious, the actual answer is an emphatic no.

You see, despite this being one of the longest bull market runs in history, the contrarian indicator of retail investor sentiment isn’t as telling this time around.

An Even Better Indicator
There is an even better sign of an impending market correction that has a sterling record over the past 40 years. And there’s no reason to believe it won’t work at the next correction.

The chart below represents the spread between the 10-Year Treasury and the 2-Year Treasury. The gray columns denote economic recessions.

As you can see, whenever the spread between long rate and short rate narrow to the point the yield curve inverts (crosses below the zero line), the stock market peaks and the economy goes into recession soon thereafter. This has been true every time since 1980.

Moreover, every single recession since 1980 is directly attributable to the Federal Reserve’s imprudent decision to artificially manipulate short-term interest rates. Of course, the Fed’s recent decision to raise rates last week shows that the Fed is still following that same playbook — and causing the spread to narrow still further.

And this isn’t good news for investors. You see, the spread between long rates and short rates is the lowest since the Financial Crisis of 2008-2009. And should this trend continue, we can say with relative certainty that this bull market will end when that spread turns negative (yield inversion). Once that happens, it will be time for investors to run for the hills — regardless of what retail investors are doing.

So how long might it take for rates to invert?

We can gather evidence from a recent presentation by St. Louis Fed President, James Bullard. In his report, he indicated the yield curve has been flattening since 2014 as indicated in the graph below. 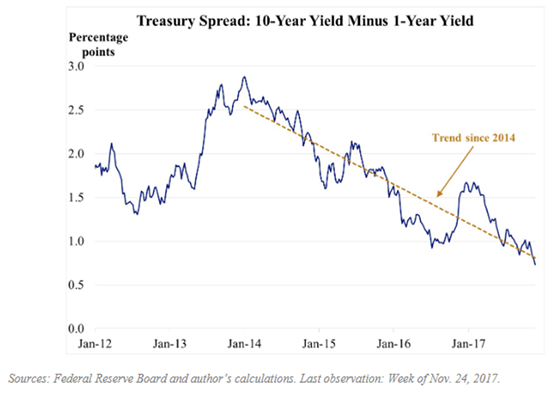 Now, if you’ll notice, he used the 1-Year Treasury against the 10-Year Bond. That’s okay since using the 1-Year T-Bill doesn’t materially change the results. All that matters is that the spread between long and short rates is narrowing, primarily because long rates are stubbornly holding their level as shown in the next Fed chart from Bullard’s presentation… 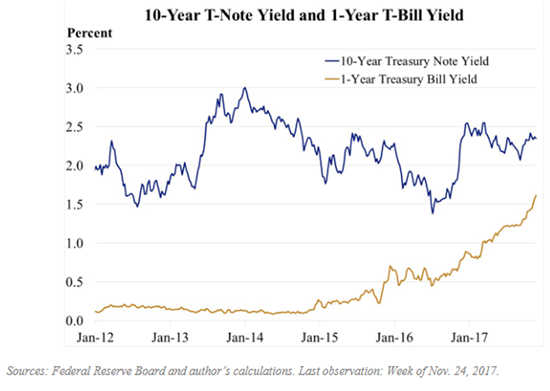 Now, the most likely reason for the lack of upward pressure on long-rates is a combination of low global economic growth prospects (keeping rates lower everywhere) as well as low market-based inflation. And with no real positive upward trend in real inflation, long rates will continue to be range-bound.

There is a significant risk of yield inversion sometime in 2018 if the Fed continues on its current course of raising short-term rates. And an inverted yield is the single most important indicator for a market correction and corresponding economic recession.

So, as important as the contrarian view of the herd mentality is, it’s even more important to pay attention to rising rates. The Fed has caused the last five market corrections and recessions, and they will cause the next one, too.

Editor’s Note: Can your stocks pass this BS test? It spots crooked stocks like Enron, Lehman Bros and AIG … BEFORE they cost you money. Check the stocks in your portfolio here.