Now’s The Time To Buy The Amazon Of China 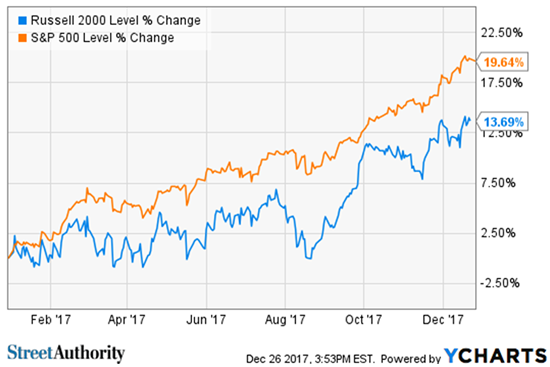 But something doesn’t pass the smell test. While both indices have solid gains for the year, it’s interesting to note that most of the Russell 2000’s gains occurred since August 21, 2017, when the index closed at 1356.90. That means that more than 77% of the year’s gains have occurred in just the past 120 days. This is likely a result of an influx of retail investors.

While that in and of itself isn’t too troubling, there’s something ominous about the valuation of the small-cap market index of the bottom 2,000 stocks in the Russell 3000 Index. You see, at its current value of roughly 1545, the stocks of the Russell 2000 have a combined value of approximately $4.5 trillion.

#-ad_banner-#What’s so ominous about that? Well, the net income from these 2000 stocks is just $42 billion, meaning the Russell 2000 is priced at more than 107 times earnings. It doesn’t matter how you look at the markets today, but any index priced at such ridiculous levels is in dangerous territory.

This is why investors looking for portfolio growth should consider the Chinese equivalent of the American company Amazon.com (Nasdaq: AMZN). Of course, that company is JD.com (Nasdaq: JD).

Now, the stock has been on a relative tear of late, rising more than 62% in 2017 alone. But don’t let that scare you away. Consensus estimates for EPS growth portend strong tailwinds starting the first quarter of 2018, which should boost the stock to new highs. 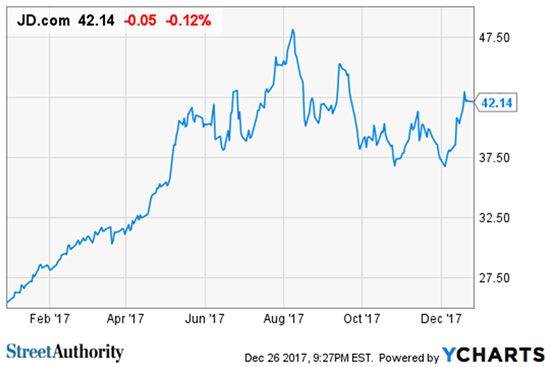 Much like Amazon, JD.com has invested heavily in its infrastructure. And this high capex spending has hurt its earnings over the years. But the result is that the company actually owns the inventory for sale on its websites — unlike Chinese giant Alibaba Group (NYSE: BABA).

The company has also mimicked Amazon by creating a warehouse and logistics network that no other competitor can come close to touching. The following chart of the company’s logistics network comes from its investor presentation for third-quarter 2017. 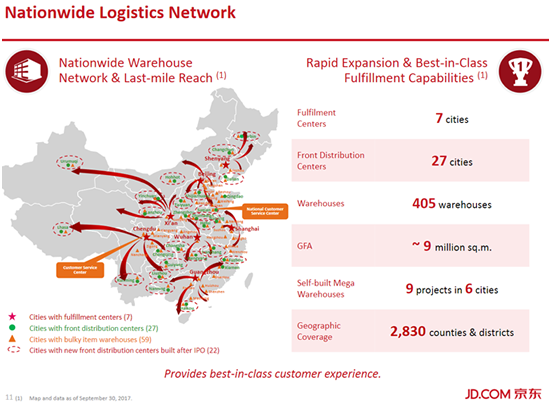 The good news is that its spending is really starting to produce results. Another chart from the company’s investor presentation shows the company has grown its customer accounts by 808% since 2012 to more than 266.3 million (about 82% of the U.S. population). At the same time, the average number of purchases has grown by nearly 595%.

But an even more important reason for my bullishness on JD.com is the continuing growth in the Chinese middle class. You see, according to a study by consulting firm McKinsey & Company, 76 percent of China’s urban population will be considered middle class by 2022. That means 630 million Chinese (twice the population of the United States) will be in the middle class, or 45% of the entire Chinese population. And that doesn’t include an additional 9% of the nation that will be considered affluent by Chinese standards.

This has propelled JD.com to forge symbiotic relationships with other companies, such as Tencent (OTC: TCEHY). The Tencent deal opened up access to popular apps like WeChat and Mobile QQ messaging. The relationship is so strong the company reports that 25% of its first-time users come from these apps. And JD.com proactively committed Tencent to a non-compete agreement through 2022.

But Tencent isn’t the company’s only major relationship. JD.com recently acquired the online Chinese grocery business of Wal-Mart (NYSE: WMT). The deal to acquire Yihaodian gave Wal-Mart a 5% stake in JD.com, which has since grown to 10.1%. There is an 8-year non-compete agreement in place against Wal-Mart that doesn’t expire until 2024 — giving JD.com plenty of time to secure its dominant position in China.

The Wal-Mart collaboration is unique to both companies. Under its current terms, whenever an order comes into JD.com, couriers receive instructions to fill the order at the closest JD warehouse or Wal-Mart store. That’s like leveraging another 424 warehouses for JD.com.

This makes JD.com the largest fulfillment center in China. Better yet, the 424 Wal-Mart stores, in combination with JD.com’s existing 256 warehouses in 54 cities, now make 99% of China accessible to the company.

Best of all, these relationships are producing results. JD.com delivered year-over-year revenue growth of 43% — almost twice the growth of Amazon.com. Better yet, it’s not all top-line growth, either. The graph below illustrates the trailing twelve months growth in cash from operations. 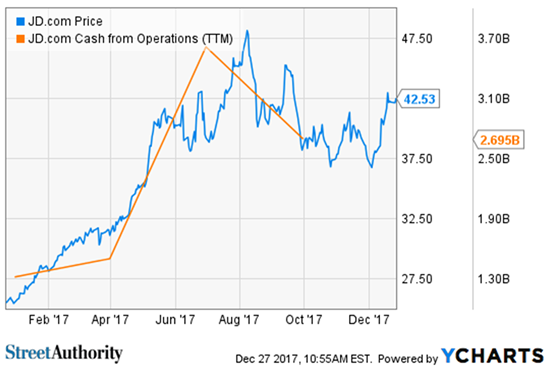 The Bottom Line
JD.com is the dominant player in the world’s second largest economy. Its business plan promises to provide a tailwind for years to come, and given the outrageous multiple at which the Russell 2000 currently trades, JD.com is infinitely safer for your portfolio.

Risks To Consider: There are dangers associated with investing in China. A great many companies are state-owned enterprises, meaning it’s possible for foreign investors to find themselves relegated to a subordinated priority behind the government. In addition, corporate governance is still a commonplace problem in China — company accounts are often incomplete or incorrect.

Action To Take: Buy shares of JD.com up to $45 a share. Mitigate risk by using no more than 3% of your portfolio to the stock. Use a 20% trailing stop to protect your capital. Expect to hold your position for at least three years.

Editor’s Note: Introducing our 13 investment predictions for triple-digit returns in 2018. Our previous predictions have delivered returns of 310%, 452% and 569%. This year’s predictions could be our best yet. Get them all here, free.