2 Coming Storms That Could Crash The Market

I’m a pilot. No, I’m not a professional pilot with thousands of hours of experience in multiple jet engines. I’m just a guy who likes to get into a single-engine Piper and take to the skies for fun.

But I share a common trait with professional pilots. Before I ever strap in for a flight, I meticulously check (and re-check) the weather. Then I pre-flight my plane as if my life depended on it — because, frankly, it does! Once I’m done with my pre-flight, the weather is checked one last time.

You see, most general aviation crashes involve pilot error in dealing with weather. And weather can change fast. It’s not uncommon to take-off from an airport in clear skies and return an hour later to angry cumulus clouds.

#-ad_banner-#And since the majority of general aviation aircraft aren’t capable of reaching altitudes required to fly over heavy weather, avoiding it is the most prudent thing any private pilot can do. This is why many general aviation pilots consider themselves amateur meteorologists. It’s an act of self-preservation.

What does this have to do with investing?

In much the way I check, and re-check, the weather before flying, I constantly monitor the “weather” associated with the economy and markets. The last thing I want to do is to fly blindly into some unexpected financial storm with no escape route already planned.

And as we get into the swing of 2018, there are storm clouds showing up on my radar screen. Now, it’s possible they’re just ordinary clouds that might dissipate before causing any real harm. But I don’t think that’s the case.

Storm Cloud No. 1
To understand the potential for storm development in the financial markets, it’s important to understand that stock markets don’t matter. Most investors know the smart money is in the bond market. And that’s where the next crisis is likely to originate.

As of beginning of the government’s fiscal year on October 1, 2018, Federal Reserve is reducing its balance sheet at the annual rate of $600 billion annually, up from $350 billion last year.

Now, remember, nothing of this magnitude has ever been attempted. It’s like landing a fighter jet on an aircraft carrier at night — while never having piloted a plane. Altogether, the Fed intends to reduce its balance sheet by some $2 trillion by the end of 2020. And I’m not confident they can pull it off.

But even if they do, interest rates will have to rise. Of this, there is no doubt. Why is this a concern?

Stock prices will feel downward pressure in light of rising rates. This is so because higher rates will sharply increase the carry cost of the nearly $13 trillion of non-financial business debt that corporations have issued while interest rates were held at artificially low rates by the Fed. Of course, most of this money was for stock buybacks and bigger shareholder dividend checks.

And this is no small deal. You see, even a rise of just 200 basis points would lower pre-tax business profits by more than $250 billion, or 15%. And of course, any 15% reduction in profits must have a deleterious effect on stock values.

But this isn’t the only cloud on the horizon…

Storm Cloud No. 2
The only thing worse than a Republican tax cut plan is a plan sponsored by the Democrats (as if that were even possible). At the end of the day, both political parties are leading the country to a fiscal cliff.

Now, don’t get me wrong. I support allowing Americans to keep more of their money. But to cut taxes while fiscal year 2019 spending will rise by $200 billion (according to the CBO) is indefensible. This increased spending is for higher defense spending, disaster relief, and general domestic increases.

That drives next year’s spending to around $4.6 trillion. And that doesn’t even count Trump’s infrastructure spending that Democrats will heartily support. That’s a minimum of 20% more than the reckless spending of the Obama Administration.

And against this, the government expects to take in roughly $3.4 trillion. That’s a deficit of $1.2 trillion at a time the Fed is driving rates higher. It’s a recipe for disaster. 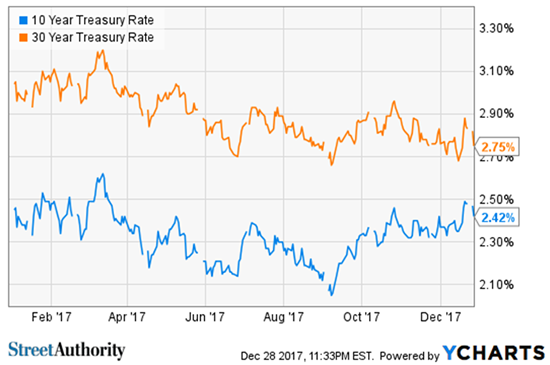 If the 30-year bond rises and stays above its long-term moving average of 3.2%, while the 10-year note stays above 2.6%, the gathering clouds will create the perfect storm. The ensuing burst in the bond market will make the crisis of 2009 seem almost tame by comparison.

Until then, the skies are clear and calm with a strong tail wind. Sit back and enjoy the ride.

Editor’s Note: While most companies have to start each day at $0 in sales… my favorite monthly payer generates daily profits rain or shine — and regardless of what’s going on in the economy. Plus… its revenue has risen more than 60% over the past four years. That’s why I’m urging you to grab this company right now. Don’t wait… Get the buy details here ASAP.