When a business changes its name, it’s usually a big deal.

You see, it can cost millions for a company to rebrand itself under a different name. It has to change its signage, advertising copy, and a million other things. It’s a task not to be taken lightly.

For example, when Kentucky Fried Chicken changed its name to KFC (NYSE: YUM), it did so to get the word “fried” out of its advertising in an age of health-conscious customers. Cigarette maker Phillip Morris did the same when they rebranded to Altria (NYSE: MO) in 2003. The political pressures associated with “big tobacco” created a need for a less caustic moniker.

But it’s important to understand that neither KFC nor Altria changed their businesses. They still sell fried chicken and tobacco respectively. They just do it under more appealing names.

#-ad_banner-#Now, companies don’t just change their names to avoid negative connotations. Some companies try desperately to take advantage of some prevailing social trend. This was never more obvious than when companies added “.com” to their names during the tech craze in the late 1990s.

This was confirmed in a research article that indicates firms that added “.com” to their names before the tech bubble implosion witnessed a statistically significant rise in their stock price — just from the name change alone. Interestingly, companies removing “.com” from their names after the tech selloff saw similar stock market increases.

So the lesson here is that many public companies have no problem taking advantage of investors naïve enough to buy a company’s stock based on some “cool” trend. Unfortunately, that trend continues today.

Cheap Tricks On Blockchain-Obsessed Investors
There has been a recent spate of corporate name changes in an effort to benefit from the trend in blockchain technology. Unfortunately, the recent trend is nothing more than business owners attempting to take advantage of retail investors.

Take BiOptix Diagnostics, for example. According to their 2016 10-K filing, the company billed itself as “a life science tools company that provides an affordable solution for drug discovery scientists who require label-free, real-time detection of bio-molecular interactions.”

But it seems there wasn’t enough money in bio-molecular interactions. So the company re-branded itself as Riot Blockchain (Nasdaq: RIOT). According to the company, Riot Blockchain is attempting to leverage “its expertise and network to build and support blockchain technology companies.”

And just in case you think this is a well-thought-out rebranding, the company doesn’t even pretend to have a legitimate purpose in re-branding. Again, according to their own website, the company intends “to become a leading authority and supporter of blockchain, while providing investment exposure to the rapidly growing blockchain ecosystem.” In other words, they’re relying on an investor’s lack of due diligence to push their stock higher on nothing more than the thrill of owning a stock that will eventually (hopefully?) have something to do with blockchain technology.

P.T. Barnum is alleged to have said “there’s a sucker born every minute.” That’s never been truer than when, sure enough, investors bought shares of Riot Blockchain — as evidenced by the chart below. 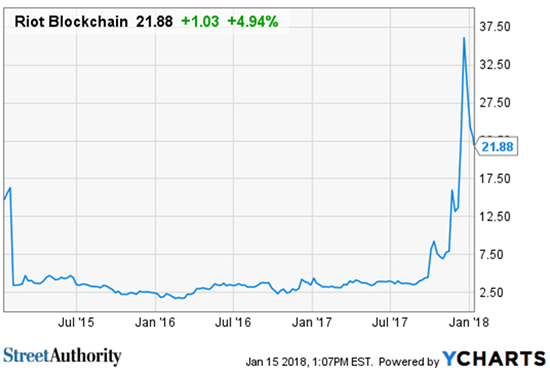 It’s reminiscent of the South Sea Bubble in the 18th century, where in one particularly bold endeavor, a businessman issued a prospectus “for carrying-on an undertaking of great advantage but no-one to know what it is.” Perhaps his progeny can write the investor presentations for Riot Blockchain in the future.

Lest you think Riot Blockchain is acting alone, other examples abound.

Long Island Ice Tea changed its name to Long Blockchain (Nasdaq: LTEA), sending shares 200% higher. It remains to be seen how a beverage maker will create shareholder value from blockchain technology — not that its investors care.

Even Kodak (NYSE: KODK) is on the blockchain bandwagon.

Shares of the print and film company spiked more than 328% in the two-day period ending January 10, 2018. 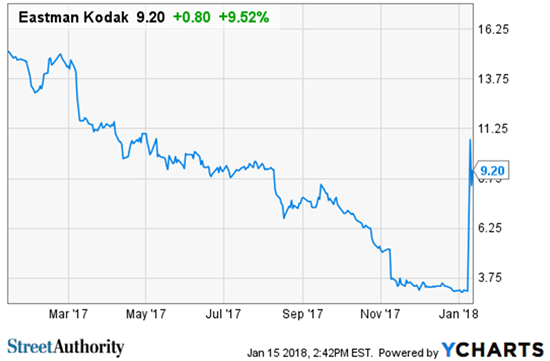 Now, the stock has given back some of those gains, but still holds a nearly 200% premium to its pre-hype stock price.

What precipitated the move higher?

It’s simple. Kodak announced it will roll out its own cryptocurrency, called KodakCoin. Ostensibly, the coin will help manage and track digital rights to photographs. Of course, there was something missing from Kodak’s announcement…

How exactly does a digital coin help photographers manage and track digital rights to photographs? Since digital coins don’t actually track and manage anything, the company’s announcement was confusing to say the least.

Now, don’t get me wrong. Blockchain technology is applicable to managing and tracking digital photographs. But that’s a long way from issuing a coin. And it makes me think there’s something else going on here…

One day prior to the announcement, seven managers at Kodak awarded themselves a total of 416,726 restricted stock units (RSUs). And at today’s price of $9.20, that represents a windfall of nearly $4 million for the company’s executives.

Now, the company says the timing was completely coincidental. But if any investors believe that, maybe P.T. Barnum was talking about them.

Editor’s Note: Want to invest in real value and get gains that are here to stay? Check out our new report, The Top 10 Stocks for 2018. There are exactly 10 buy-and-hold stocks that can double your market gains in 2018… just as they have for the past three years. Click here for the full report.