New Solar Tariffs Could Earn Us An Easy 38 Percent Gain

Last Monday, President Trump added another notch to his “America First” belt with the announcement of a new 30% tariff on imported solar panels.

Companies that produce solar cells and panels will get to sell 2.5 gigawatts worth of those energy products to U.S. consumers, but they’ll have to pay a special tax on any sales above that amount. For the first year of this new policy, that extra tax is set at 30%, which will then decrease 5% each year over a four-year period.

News of the tax triggered a small selloff in many solar companies, but this knee-jerk reaction is incorrect…

The main impetus for this move was to support American solar manufactures by discouraging imports from China, a solar powerhouse that now produces 60% of the world’s solar cells and 71% of solar modules.

#-ad_banner-#The rise of China’s solar production has all but killed stateside producers, with 25 companies closing their doors since 2012.

A tariff on cheap solar modules might sound like a good way to kill solar growth, but companies like Tesla (Nasdaq: TSLA) and Panasonic — which joined up in 2016 to produce solar panels and cells at their Buffalo, New York-based Gigafactory 2 — are ready to pick up the slack, along with the remaining U.S. producers like Suniva and SolarWorld Americas.

The tariff is also likely to trigger Chinese and other foreign investment in U.S. manufacturing facilities to skirt the hefty tax. This would mean more stateside production and, by my estimates, innovation.

I believe that this major action is likely to spark rising competition here in the states and increase the efficiency of quality systems. And because Trump and Congress also extended the Federal solar tax credit, solar-based systems will continue to be a very attractive (tax-advantaged) clean energy solution for at least the next three years. This should keep demand strong, along with rising oil prices and a growing social desire to do right by the environment. (Personally, I’m just glad to see us unlatching from the OPEC teat.)

Regardless, solar manufactures are going to be looking for anything they can do to save money for their buyers and keep margins strong — and that’s where SolarEdge (Nasdaq: SEDG) comes in.

The Intel Of Solar
SolarEdge, based in Israel, produces several key components needed for residential, commercial and industrial solar systems. Think of them as the Intel (Nasdaq: INTC) of solar: The “SolarEdge” name might not be the company selling the system, but its hardware is an essential part of its operation.

Its flagship product is an intelligent inverter solution that has transformed the way power is harvested and managed in a solar system.

This direct current (DC) optimized inverter system maximizes power generation at the individual PV module level while lowering the cost of energy produced by the solar PV system. SolarEdge’s patented inverter is not only best in class, but also contains an energy storage unit and/or charger, which differentiates it from its main competitor, Enphase energy (Nasdaq: ENPH).

In addition to its popular inverter, SolarEdge offers a full suite of solar products and solutions that have been selling extremely well. Its integrated electric vehicle (EV) charger is pretty awesome and can charge up to six times faster than the level 1 chargers currently in many EV garages.

Another interesting trend is big energy companies like Duke Energy (NYSE: DUK) offering their own rebate programs to spark sales of rooftop solar installations — a trend that would certainly help SEDG.

If you’re not familiar with electricity or solar, just know that SEDG’s products make solar-based systems more efficient and less expensive to operate. When installers are looking for high-quality solutions to get costs down, SEDG is the company they will continue to turn to.

The Best Of A Niche Breed
Just as various suppliers sell proprietary hardware to Apple to produce the iPhone, SolarEdge will sell to installers and solar system manufacturers like Solar City.

As cheap Chinese knock-offs become less common (thanks to Trump’s tariff), quality products from Israel, one of our closest allies, will have a chance to flourish.

The best part about SEDG is that the company has already been killing it in a tough solar market —  earnings grew just under 50%over the past year! And with some of the highest margins in the industry, SEDG is expected to grow revenues at nearly 22% when it reports earnings around Valentine’s Day.

Even with its strong growth and impressive results, shares are trading at a dirt-cheap 15 times forward earnings. That’s even less than the broader S&P 500, which trades at a forward multiple of 18.4.

The truth is that investors are a bit thrown off by the company’s 169% price increase over the past year. But even if the company just meets its 12% long-term EPS growth estimates, its performance and valuation make it a value stock when you look at the average stock in the S&P 500.

SEDG is also growing its international revenue, increasing its earnings outside the United States by 50% over the past year. Analysts see this as a major catalyst for long-term growth.

And with the push for higher-quality products here and a strong year expected for solar overall, there’s no reason why SEDG can’t get back to recent levels around $40. 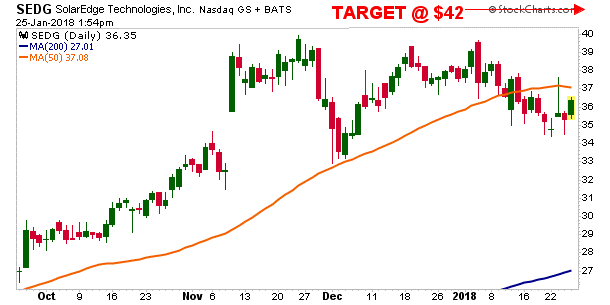 Our target for the stock will be $42 by June (hopefully way before). And thanks to the power of options, that 15.5% increase would be enough of a move for us to capture a potential 37.9% gain with using call options. That’s 97.5% annualized.

Sounds crazy right? It isn’t — Wall Street uses the same strategy every day. If this still sounds risky to you, maybe because you’re new to options trading, know that this trade breaks even if SEDG hits $39.80. And that’s just a simple move back to where the stock was trading a few weeks ago.

I’m talking about returns of 31%, 35%, and more — all in a matter of weeks rather than months or years. In fact, we just closed a trade on Take-Two Interactive (Nasdaq: TTWO) for a clean 38.9% in just over four weeks.