When we talk about investing, 99% of the time we focus on the “long” side of the market.

It’s understandable. There’s a social aspect to it — we’re naturally conditioned to want to bet in favor of something, rather than against it.

If you’ve ever played craps at a casino, then you know that the guy who bets on the “don’t pass” line is usually not the most popular person at the table. After all, you’re betting that the rest of the crowd “craps out” — while you reap the rewards.

Betting against stocks is a similar situation. It won’t win you any popularity contests, but it is a viable strategy that you can use to profit.

For most, if you want to bet against a stock — options are the way to go. As my colleague Jim Pearce will tell you, the risk/reward profile is much more favorable. (More on that in a moment…)

But what if you simply want to have a better understanding of how shorting works? Fair enough. Let’s spend some time on that today.

But first, let’s be clear: Shorting is not a panacea. If you’re not using options, most traders shouldn’t make more than a few short plays within a given year. Others, perhaps only a few within their lifetime. (And some not at all…)

So now, having said all this, be prepared to expand your horizons…

Shorting a stock is as easy as going “long” a stock — once you understand the basics.

When investors go long, it means they’re buying shares of a stock in the belief that the price of shares will rise over time. If and when they do, they’ll ideally sell the shares back to the market at a later date for a higher price than what they paid. If they’re wrong, they’ll sell the shares back for a loss.

When investors short a stock, the same thing happens, but in reverse. A trader will first sell shares of a stock by borrowing the shares from their broker, anticipating the share price will drop. If that happens, they’ll turn around and buy these shares back for a lower price and return them to their broker.

So instead of buying, owning, and selling shares… you first borrow, then sell, and then buy back (or “cover”) shares.

Things To Keep In Mind

There are few other key differences to take note of, however, and you need to understand the risks involved. One aspect of shorting that often scares investors away is the idea of unlimited downside. Let me explain…

When you take a long position on a stock, your downside risk is limited. For example, if you bought a share of XYZ stock for $50, then the worst that could happen is the stock price moves to $0. Now, a 100% loss on your investment. Sounds awful, right?

When you sell a stock short, the share price could rise to $55, $70, $100 and higher — all the way to, hypothetically, infinity. Since there is no limit on how high a stock’s price can go, short sellers theoretically have infinite downside potential.

Sounds scary, right? This is probably the single biggest reason why most investors who understand shorting stocks don’t do it.

But if you implement a few simple strategies, then you can capture solid returns and mitigate unnecessary risk. (Honestly, you should probably consider using what I’m about to tell you whether you’re going long or short.)

First step: cut your losses. A 25% loser will mathematically require a 33% gain just to break even. If you let a loser fall 50%, then you have to make a 100% gain in order to get your money back. It gets worse the longer you let your losers ride. By cutting your losses, you’ll never have to face that daunting task of picking the next triple-digit winner just to get back to square one.

The best way to do this is by using either a hard stop-loss or a trailing stop.

Let’s look at an example…

Let’s say you decide to implement a 20% trailing stop loss on that XYZ stock you bought at $50. If the stock hits at $40, then a sell order will be entered automatically, getting you out of the stock. It’s a different animal if you choose to use a “mental” stop-loss instead of using one through your online broker. It’s up to you to decide whether you have the self-discipline to actually carry this out on your own.

This process works the same for when you short stocks. If you short a stock at $50, then be prepared to buy to cover your position if and when the stock reaches your breaking point. The percentage that you decide on is up to you. But the important thing is that this gets you thinking about how much of a loss you are willing to accept before you find out later, when it’s much more painful.

As a rule of thumb, if you are buying a stock that tends to be more volatile, then you may want to implement a wider stop-loss.

Whatever stop you decide to use… a hard stop at a specific price, a trailing stop, a “mental” stop… it doesn’t matter as much as actually implementing the stop. Following your exit strategy is key.

Next, you should always remember to use sensible position sizing. (That means don’t bet the farm on one short trade.) Again, this applies whether you’re going long or short. But since the hypothetical risk is elevated with going short, this is all worth repeating. Whether you’re shorting stocks or going long, this is something every investor should implement in their portfolio.

A Better Way To Bet Against Stocks

Now that you understand the basic mechanics of shorting, we should address the elephant in the room. As I said earlier, shorting stocks outright is rarely the best course of action.

Buying put options to bet against stocks is a much better alternative.

A put option increases in value when the price of the underlying security is going down. However, unlike selling a stock short that has unlimited risk, the only money at risk is the premium you pay for the put option. Put option premiums are priced on a per-share basis assuming 100 shares per contract. So, if you buy a put option that is priced at $6, the total cost will be $600 per contract plus whatever trade commission or fee is charged by your broker.

This is a game-changer if you’re looking to bet against stocks, but don’t want to risk thousands (or tens of thousands) of dollars in capital with each trade. It also leaves plenty of dry powder on hand to execute other trade ideas.

But the payoff can be huge. And that’s exactly why my colleague Jim Pearce launched his premium service, Mayhem Trader.

The goal of Mayhem Trader is simple: identify areas of the market that are about to experience upheaval, and make calculated, well-timed trades by using put options to profit.

With the Mayhem Trader system at their disposal, Jim and his followers can identify a stock that’s set to drop, buy a put option, and turn even a small loss into a massive gain in a matter of days. Here’s the kind of gains we’re talking about, which come from Jim’s past trades: 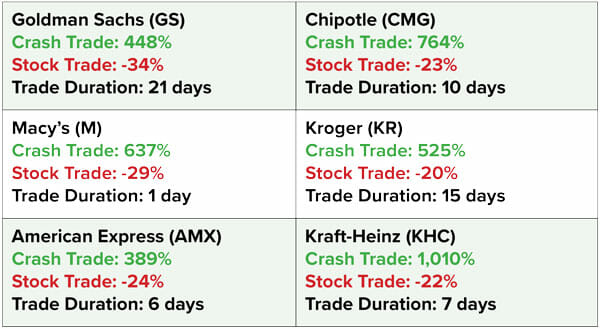 If you’d like to learn more about how to make bets against stocks that are set to crash, then Jim and his team have you covered…

In fact, Jim and his followers are set to profit from another “tech bubble” crash in some of the most well-known names on the market. And he’s prepared a full briefing for investors who want to know more.

Go here to get all the details on how to profit before the day of reckoning — and make huge gains in a matter of days.