This Is Easily The No. 1 Pot Stock To Own

It’s also set to unleash a multi-billion dollar industry. Cannabis sales are expected to be between $5 and $7 billion in the first 12 months after legalization. That would be between a 400 percent and 600 percent increase from Canada’s 2017 numbers.

If you want to learn how you can potentially profit from this cannabis revolution, let me tell you about one of the most promising companies in Canada’s high-growth cannabis market.

#-ad_banner-#​Aphria (TSE: APH) is an early leader in Canada’s high-growth cannabis industry. With a market cap of $2.4 billion, Aphria is the second-largest cannabis company in Canada behind Canopy Growth Corp’s (TSE: WEED) $6.6 billion.

If there is one stock to own to profit from the cannabis revolution, Aphria is the choice. Let me explain…

Aphria Is Benefitting From A Legal Monopoly
Aphria won the cannabis lottery back in 2014 when it received an exclusive permit to grow and sell cannabis from Health Canada, the regulatory agency responsible for issuing permits.

At last count, more than 1,000 companies have applied for a license. But as it stands, Health Canada has only issued 93 permits — and Aphria is one of the lucky recipients.

Health Canada will issue more permits in the next few years. But it is deliberately restricting the number of permits to encourage young cannabis companies’ profitability, as this will help to remove illegal cartels from the cannabis trade.

The new facility will include:

This new greenhouse positions Aphria to be the number one low-cost provider of cannabis in Canada — and eventually the world as it continues expanding into international markets.

The final phase of the project is projected to be completed this summer.

Aphria is just one of four Canadian cannabis companies making moves to tap into this market. In August of 2016, Aphria announced it had signed a deal with Australian cannabis biotech Medlab Clinical (ASX: MDC) to supply dried cannabis for its clinical research programs. Medlab is developing cannabis-based pain medications for cancer patients.

These international relationships set the stage for Aphria to grow into a global leader with the lowest cost of production in the next five years.

Aphria On The Chart
It’s been a wild ride for Aphria on the chart. Shares ripped higher in 2016, jumping more than 500%. But after hitting a new all-time high in early 2017, Aphria fell into a nasty bear market, falling more than 50%.

But after bottoming out in early June of 2017, shares exploded more than 300%, hitting a high over $18 in January 2018. And although shares took a beating in February, Aphria has clear upward momentum. Even with its high P/E ratio, analysts rate Aphria a “buy” on average, and are targeting a price of $27.25. 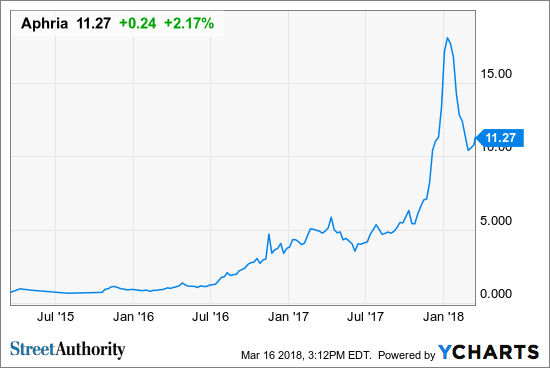 Risks To Consider: Aphria and other Canadian cannabis companies have high P/E ratios. This says that investors are expecting big-time sales growth in the next few years. Although I expect that to happen, Aphria will need to deliver in order to keep its shares charging higher.

Action To Take: Aphria is an early leader in Canada’s high-growth cannabis market and positioned to be a future global leader just like Budweiser and Marlboro. Buy shares below the all-time high, hold for the long haul and look for market-beating gains in the next five to ten years.

Editor’s Note: There are exactly 10 buy-and-hold stocks that can double your market gains in 2018… just as they have for the past three years. Click here for the full report.